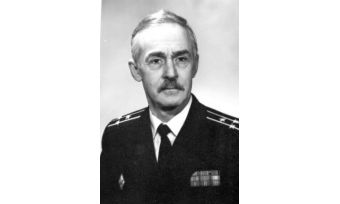 On 26 August 2014, Victor G. Rybin died at the age of 83 after a long illness. He was captain of first rank known as hydrographic and marine cartographer and served and worked in the Hydrographic Service of the Soviet Navy and Russia for more than 60 years.

He was born on 21 October 1931 in Omsk; his father, a military hydrographer, later became a member of the Great Patriotic War and helped defend besieged Leningrad.

From 1949 to 1953 Victor studied at the Hydrographic Department of the Higher Naval School of M.V. Frunze and later served in the North Hydrographic Expedition where he performed soundings in the White and Barents Seas and hydrographic work on the drifting ice in the Arctic Ocean, the Black Sea, the Baltic Sea and the Atlantic Ocean.
From 1962 to 1965 V.G. Rybin attended the Naval Academy from which he graduated with a gold medal. He then served at the Research Institute for Hydrography where he developed new tools, techniques and technologies for hydrographic and cartographic work.

Victor G. Rybin was the USSR representative to the IOC of UNESCO (Paris) and other international organisations, in particular, the Regional Data Centre International Monaco.

Captain of first rank V. Rybin was the head of a foreign relations group of the main USSR Department of Navigation and Oceanography of the Ministry of Defence for the period from 1975 to 1986 and after the transfer to the reserves he worked in the Central cartographic production of the Navy until 2000, where he gathered information and analysed cartographic activity (domestic and Russian).

In 1992, the sociable Victor G. initiated the establishment of the Hydrographic Society (HS). He was the executive secretary of the HS from 1992 to 2005. He was the organisation’s correspondent for the magazine Hydro International. In 2006, Victor G. was elected Emeritus member of the Society but he continued to work actively in the Council of the HS until 2014.

The deceased was a real officer, an intellectual of St. Petersburg, a wonderful man, a good friend, and a good husband, father and grandfather.

His funeral was held on 29 August 2014 at the Smolensk Orthodox cemetery of St. Petersburg. More
than 60 people came to pay their last respects.