For many years, the US Navy’s Naval Oceanographic Office (NAVOCEANO) has developed bathymetric surfaces from multi-beam data in support of deep-water navy requirements. Since the advent of digital processing, these gridded surfaces have been stored in the Digital Bathymetric Database – Variable resolution (DBDB-V). Recent developments in the hydrographic community, including widespread use of multi-beam echosounders and the development of electronic charting systems, have led many hydrographic and charting organisations toward a new production paradigm centred on gridded surfaces instead of sounding-focused processing and products.<P>

We are pleased to welcome Rear Admiral David W. Titley as a new member of the Editorial Advisory Board of Hydrointernational. In addition, we would like to thank his predecessor Rear Admiral Timothy McGee for his commitment over the past two years.


The current US Navy requirement for seamless operations from blue water into littoral regions demands a seamless bottom model. This, coupled with emerging abilities to gather coastal soundings (imagery-derived bathymetry, field collection from Navy assets and sensors, LiDAR, etc.), is providing a unique opportunity for NAVOCEANO to implement a global bottom model. This model will serve as a core capability to integrate all bathymetric production within the office, in addition to serving as the basis for operational mission-planning and environmental tactical decision aids.

Two new technologies – ellipsoidal-referenced surveying and the navigation surface – are being employed to make this vision a reality. Ellipsoidal referencing will provide a common vertical reference for bathymetric/hydrographic data, thus allowing a shore-to-shore bottom model. Surveying to the ellipsoid reduces errors associated with water levels that vary spatially and temporally, such as tides. It also affords the ability to apply statistical methods for data processing, thus reducing time and effort.

The concept of navigation surfaces, using the bathymetric attributed grid (BAG) format developed by the University of New Hampshire’s Center for Coastal and Ocean Mapping (by S.M. Smith, 2003) provides a bottom model at the best resolution that the sonar will support. Depth estimates for charting purposes are then taken from generalised grids of the surface(s). In addition to the depth estimate layer of the navigation surface, a layer of uncertainty is created. This layer provides a quantitative assessment of quality for each node of the grid.

Source data exist to augment our new DBDB for Navigation at a Variable resolution (DBDB-NV) in many coastal regions. The challenge is to provide the technical and systematic means for pooling the hydrographic data into homogeneous bottom models, and then coupling that with the bathymetry in DBDB-V to create an implementation of the navigation surface concept in a database with global coverage. This new version of the global bottom coverage, along with quantifiable uncertainty, will greatly enhance the usage and utility of the database. It will no longer serve as just a source for deep-water navigation, but can be used for other purposes, such as a bathymetry source for acoustic propagation models, derivation of surface navigation products and potentially a direct source for electronic chart display.

The NAVOCEANO hydrographic/bathymetric production process is being adjusted to follow logical data flow. The data, after collection, will be edited at sea and then pushed to NAVOCEANO via C-band transmission. The data will be validated and BAGs created for input into the DBDB-NV. Using the database as a source for product creation, the data can be quickly provided to war fighters in readily usable formats. Furthermore, the database of surfaces will retain the best resolution data or source surfaces for future product creation.

The infrastructure of making DBDB-NV a reality is under development and scheduled for release later this year, which will in turn implement a global navigation surface database for the US Navy. 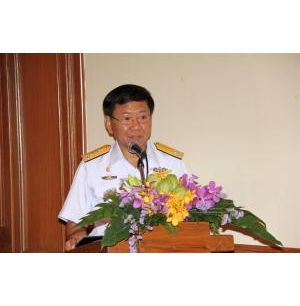