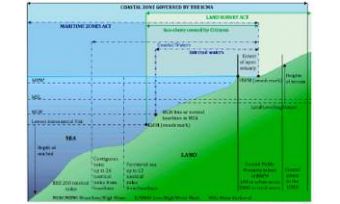 Since time immemorial the seashore has played an evolving but important role in society. In South Africa, the interface between rights in the land and the seashore has been the high water mark (HWM). The Seashore Act No 21 of 1935 (SSA) and the Maritime Zones Act No 15 of 1994 (MZA) governed the extent of these rights. Environmental concern, increasing risks in coastal areas, and the need to approach the management of coastal land and sea in a more holistic manner, has led to the Integrated Coastal Management Act No 24 of 2008 (ICMA), which largely replaces the SSA. Surveying of the HWM is not a simple matter, neither is the definition of coastal zone boundaries inland, in terms of the ICMA.

Can tidal datums be used to define the landward extent of the seashore? In Australia, as in other countries with British-derived legal systems, it is possible to model the interface between marine and land-based cadastral parcels using the Mean High Water (MHW) line. The MHW is a tidal datum surface which, when interfacing with the terrain, transcribes a contour which can be generated by using 3D modelling.
In South Africa, a tidal datum cannot be used to define the HWM boundary since its definition is based on Roman-Dutch law. The HWM is not a contour but a line of variable height due to the ’swash’ caused by wind and wave action under conditions of storms and spring tides.

Storms which are classified as of a severity not likely to occur more frequently than once in ten years are excluded from the HWM definition, but this classification is likely to be problematic as is the determination of the HWM between such events. Also, estuaries may always be open to the sea, always closed to the sea, or may be open to the sea only at times.

Following South African case law (Pharo v. Stephan, 1917, Karim and Others vs. Union Government 1933 NPD 168), and in the ICMA, physical evidence, such as debris, is most often used to locate the position of the HWM for cadastral purposes. Storms excluded from the definition do not cause the location of the legal HWM to move. It is in its natural location should such an event not have occurred causing surveying difficulties due to lack of physical evidence, particularly after a severe storm.

Figure 1 (above) illustrates the spatial relationships between key legislation, between datums, and with regard to water lines and water marks in the coastal zone in South Africa.

Seaward cadastral boundaries and their evolution are fraught with complexity under the ICMA (Section 14). Boundaries which were defined by straight lines prior to the ICMA (a), and HWM boundaries which have been replaced by straight line boundaries in terms of the ICMA (b), are not fixed in time. If land is submerged by the sea for three or more years, ownership rights are lost, even if the physical HWM recedes seaward exposing the land again. Thereafter the extent of the land parcel is reduced to the furthest inland extent of the seashore and is replaced by a curvilinear and ambulatory boundary (a)(i) and (b)(i). This process is particularly unclear and not explicitly supported by surveying legislation (LSA).

Prior to three years, the boundaries and beacons are simply submerged and may re-emerge (a)(ii) and (b)(ii).
When the HWM is surveyed in terms of the ICMA, this location becomes the legal position of the HWM until it is resurveyed, which is possible after two years ((b) and (d)). In the meantime, the physical HWM may depart from the legal HWM ((b)(ii),(d)(ii)), but the legal HWM is used to determine coastal zones inland for land use and development control.
Over time, the landward boundary of the seashore is formed by offset segments joined by regular cadastral boundaries of littoral land parcels.

The relevant case law and principles of accretion/erosion versus abrupt movement and the effects on land ownership are well-explained in Simpson and Sweeney. Natural and gradual movement of the HWM is valid in terms of boundary movement, whereas abrupt or unnatural movement is not. However, in the ICMA, accretion includes both natural processes and human intervention (ICMA, Section 14(6)) including accretion due to landowner intervention on his/her property! As for erosion, Section 14(5) includes inland movement of the HWM due to erosion, sea level rise, or other causes, which could include human intervention.

The ICMA has ushered in a new era of integrated coastal management in South Africa. This is imperative in the light of a variety of threats to sustainability in the coastal zone, the sensitivity of coastal ecosystems, the rights of the public to the seashore, and in managing the development of valuable coastal property. This article is only an initial step in unpacking the complexities of surveying under this new legislation.

This article was originally written for, and published in the September 2011 issue of GIM International, a sister publication
of Hydro International. 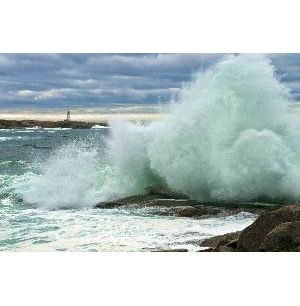