Creating a 3D Landscape Model of a Gravel Quarry in Germany 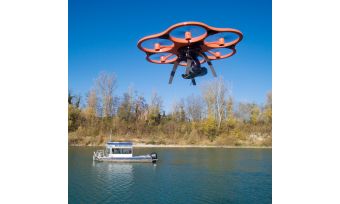 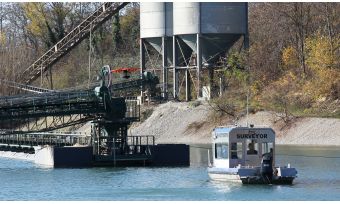 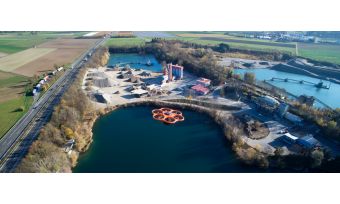 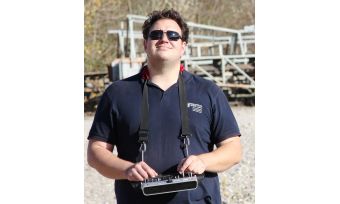 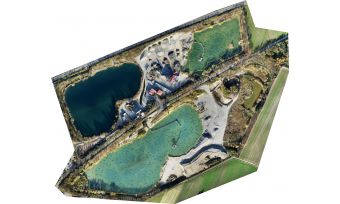 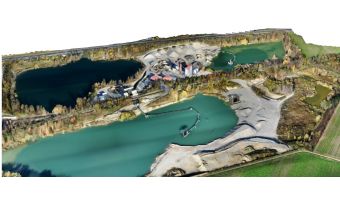 Knowing the volume of material present in a gravel quarry can make the difference between profit and loss. A gravel quarry in Hartheim am Rhein, southwest Germany, is partially covered by artificial lakes. To determine the volumes of the above-water gravel dumping grounds and to map the bottoms of the lakes, high-precision data captured by an unmanned aerial system (UAS) was combined with multibeam echosounder data obtained by boat. Read the full article for a description of acquisition of the two types of data, how they were integrated and the benefits for the mining company.

A gravel quarry is associated with diggers, rough terrain, artificial lakes and heavy vehicle traffic. Surveying should not hinder the digging work as this would waste time and thus affect revenues. Therefore, to avoid interruptions or delays, the quarry site was captured by an unmanned aircraft system (UAS) while the lakes were mapped from a survey boat equipped with a multibeam echosounder (Figure 1). Both surveys were conducted simultaneously. Not only does the use of a UAS avoid interruptions to the digging work but it also prevents surveyors having to venture onto hillsides or slippery slopes on foot to install a levelling rod, a GNSS pole or a total station prism. It is thus a very safe surveying technology and also eliminates a considerable amount of on-site work.

The Hartheim am Rhein site, run by Knobel-Bau GmbH, is the biggest quarry site in southwest Germany. Located alongside the A5 motorway and covering 55 hectares, the quarry includes two artificial lakes both resulting from the removal of gravel (Figure 2). The lakes are flanked by trees, rocks and agricultural fields on one side and by the motorway on the other. A municipal road divides the quarry into two separate areas. On both lakes, floating dredgers excavate gravel on five to six days per week. The banks are largely inaccessible and the mined gravel is stored on two dumping grounds. There is a single access road leading to the two lakes, which are not connected. A trailer is required to move the survey boat from one lake to the other. This is a time-consuming endeavour which involves a team of three engineers in its planning and execution.

The Aibot X6, a hexacopter with a diameter of 105cm and a height of 45cm, has an unladen weight of 3.4kg and can carry a maximum payload of 2kg. Equipped with the Nikon Coolpix A, a standard camera with a CMOS sensor and rolling shutter, the take-off weight of 4.75kg guarantees a maximum stay in the air of 15 minutes under optimal conditions. The maximum speed of 40km/h makes it possible to fly over the furthest corners of the quarry within the 15 minutes of available flight time. The UAS works with a standard GNSS resulting in a precision of 2cm, which is more than enough for the present application. The flights can be conducted with or without automatic take-off and landing, position hold, point-of-interest hovering or other support functions. The navigation sensors, including GNSS, gyroscope, accelerometer, barometer, magnetometers and ultrasonic sensors, allow the Aibotix AiProFlight flight planning software to execute nearly fully autonomous flights. The gimbal supports the switching of the sensor within minutes. The survey boat, built in 2011 by Lorsby in Winsen/Aller, Germany, is equipped with a multibeam echosounder and a Leica GNSS receiver (Figure 3). The echosounder measures single depth points in grid cells of 20cm x 20cm. A total station on the ground, the Leica Nova MS60 MultiStation, captures additional measurements of terrain features.

In Germany, official permission is needed to fly over motorways and most cities. Legal regulations prescribe that flights have to be executed in line of sight and the pilot must be able to control the UAS manually at all times (Figure 4). To guarantee safe operation, two pilots executed the survey: one operated the UAS and the other assisted in sighting the UAS. Commercial operation of a UAS requires permission from the local aviation safety organisation and the police must also be informed. While it was easy to obtain the relevant permission, it was a challenge to plan the survey without flying over the motorway since it passes some parts of the quarry at a distance of just 10 metres.

Using Aibotix AiProFlight, it is possible to plan the flights both in the office and on site. The pilot can define all waypoints and the camera exposure positions using a PC or a tablet and upload the survey details wirelessly. For experienced pilots, the planning procedure only takes a few minutes. The weather during the survey in November 2015 was sunny but windy. The image capture was planned to be carried during five individual flights while flying at a height of 90m above ground, but due to the wind the decision was made to increase the number of individual flights to seven. To ensure safe flights the wind speed should not exceed 6m/s and the planned flying time should allow for a margin of 30% of the total flight time as back-up. For GNSS positioning, 10 satellites could be tracked during the flights. For georeferencing purposes, 12 ground control points were distributed over the area so as to ensure visibility from the air.

To create the deliverables, the data captured from the ground, water and air had to be combined. Back in the office, a digital surface model (DSM) with a grid spacing of 4cm and an orthomosaic were created from the UAS imagery using Agisoft PhotoScanPro. The georeferenced depth values acquired by the hydrographic survey were processed using Autodesk AutoCAD to generate a DSM of the lake bottoms. Next, both DSMs were combined in AutoCAD to compute volumes of the terrain features and the lakes and to generate contour lines. The contour lines were superimposed on the orthoimages (Figure 5).The entire project took eight working days, from planning, execution of the flights and the hydrographic survey to the final volume calculation, orthoimage generation and the creation of the 3D landscape model (see Figure 6).

The orthomosaic with contour lines and the 3D landscape model provide the mining company’s management team with all the information necessary for monitoring and managing the exploitation of the quarry. A DSM automatically generated from imagery may contain artefacts. Although not 100% realistic, the virtual representation of the quarry in the form of 3D landscape models has been an eye-opener for the managers as it gives them at-a-glance insights into what is on the ground and hence enables them to improve their plans and save costs. The products have also been used to update all site plans, and bimonthly or quarterly updates are envisaged for the future.

The biggest challenges in this project were posed by the flight restrictions around the quarry, with the two lakes and the wind adding to these challenges. The combination of aerial, hydrographic and ground-based total station data made it possible to considerably reduce the costs for monitoring the quarry site.

Biography of the Author

Benjamin Busse heads the UAV Business Segment for IngenieurTeam GEO GmbH. He holds a BSc in cartography and geomatics from Karlsruhe University of Applied Sciences.