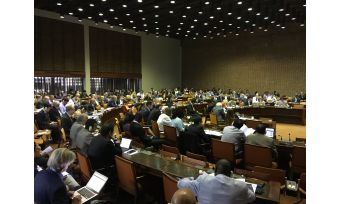 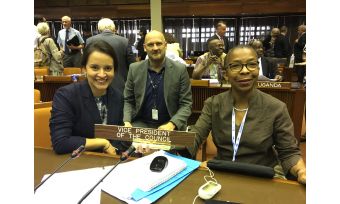 Overlooking the large and choppy natural port of Kingston, Jamaica, and surrounded by waving palm trees, the International Seabed Authority (ISA) headquarters hosted the 23rd ISA Annual Session from 8-18 August 2017. Highlights of this session were allowing for Poland to explore an area near the Mid-Atlantic Ridge for polymetallic sulphides mining and the extension of India’s contract for polymetallic nodules exploration. Furthermore, the first draft of the Exploitation Regulations was published online.

The Assembly is presided by  Eugénio João Muianga (Mozambique). He emphasized during the opening the responsibility and active role of the Assembly in addressing challenges and opportunities relevant to the sustainable use of the oceans, as well as its mandate and role in cooperating with other processes and all stakeholders for better ocean governance.

The Council is presided by Ariel Fernández (Argentina). He presented a report on the status of contracts for exploration and related matters (ISBA/23/C/7), highlighting  three new contracts signed since the 22nd session, and an additional one expected to be signed before the end of 2017; four agreements signed for a five-year extension of exploration contracts, with two more expected to be signed by the end of the present session; and the status of consultations regarding the establishment of an annual overhead charge of USD47,000 to cover the costs incurred by the Authority in administering and supervising contracts.

The ISA was established as an autonomous institution under UNCLOS Part XI and the 1994 Implementing Agreement to organise and control activities in the Area, particularly with a view to administering the resources of the Area. The Authority, based in Kingston, Jamaica, came into existence on 16 November 1994 and became fully operational in 1996. Among other things, the ISA is mandated to provide for the necessary measures to ensure the effective protection of the marine environment from harmful effects, which may arise from mining activities in the Area.

The ISA organs include the Assembly, the Council, the Finance Committee, the LTC and the Secretariat. The Assembly consists of all ISA members and has the power to establish general policies; set the two-year budgets of the Authority; approve the rules, regulations and procedures governing prospecting, exploration and exploitation in the Area, following their adoption by the Council; and examine annual reports by the Secretary-General on the work of the Authority, which provides an opportunity for members to comment and make relevant proposals.

The Council consists of 36 members elected by the Assembly and representing state parties that are consumers or net importers of the commodities produced from the categories of minerals to be derived from the Area (Group A); state parties that made the largest investments in preparation for and in the conduct of activities in the Area, either directly or through their nationals (Group B); state parties that are major net exporters of the categories of minerals to be derived from the Area, including at least two developing states whose exports of such minerals have a substantial bearing upon their economies (Group C); developing state parties, representing special interests (Group D); as well as members elected according to the principle of equitable geographical distribution in the Council as a whole (Group E). The Council is mandated to establish specific policies in conformity with UNCLOS and the general policies set by the Assembly, and supervise and coordinate implementation of the Area regime.