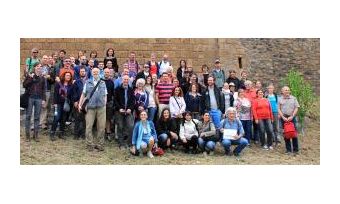 The 12th Geological and Biological Seafloor Habitat Mapping (GeoHab) conference was held in Rome, Italy, from 6 to 10 May 2013, hosted by the Geological Survey of Italy (ISPRA) together with the Institute for Coastal and Marine Environment (CNR). The conference attracted approximately 200 participants from 25 countries and included a range of posters and oral presentations related to scientific and technical aspects of marine habitat mapping.

The scientific sessions were preceded by a workshop on backscatter processing (held on 6 May), attended by over 90 delegates. Presentations from this workshop will soon be publicly available, with the main outcomes emphasising the immediate need for standards related to backscatter acquisition and processing.

A key feature of the conference was student participation and this was highlighted by a set of four papers delivered by students who received GeoHab’s Ron McDowell student support award to attend the meeting. They were Myriam Lacharité (Canada), Sophie Barton and Alix LaFerriere (New Zealand), and Mary Young (USA), all of whom gave outstanding presentations at the conference. Myriam Lacharité’s paper was titled ‘An object-based semi-automated method to assess fine-scale benthic complexity in deepwater continental shelf habitats’, and her work used digital seafloor photographs to describe biological communities and substrate characteristics in the Gulf of Maine. Sophie Barton’s paper was titled ‘Predictive substrate and benthic habitat mapping in the active volcanic environment of the Kermadec arc’ and her presentation described a nested approach using multi-beam imagery, underwater video and sampling to map benthic habitats on seamounts.

Alix LaFerriere’s talk was on the ‘Validation of supervised segmentation and classification of backscatter data of Barrett’s Reef, Wellington South Coast, using drop-camera video’. Her talk focused on the protocol used for collecting ground-truth data in very shallow-water environments. Mary Young’s presentation was titled ‘Using species distribution models to evaluate the placement of California marine protected areas’ and she evaluated the distributions of species inside and outside the MPAs, finding that the abundances of key resource species are higher inside the MPAs compared to outside. The cost of registration and the conference dinner were also partially covered for several other students at the meeting with GeoHab.

A new art book that is being supported by GeoHab was discussed during the conference. This book will contain examples of acoustic seafloor imagery that are also deemed to possess artistic value. The editors of Visual Soundings (Vanessa Lucieer, Margaret Dolan) requested appropriate acoustic images and associated information from individuals or organisations wishing to contribute to this exciting project.

The last day of the conference (10 May 2013) included a field trip to the Monte Argentario Peninsula, which is a typical location for coastal sedimentary structures known as ‘tombolos’. Spectacular views of the tombolos and coastal lagoons were seen from near the 635m summit of Monte Argentario, which were much appreciated and enjoyed by all participants.

GeoHab is an annual forum that brings together geologists, biologists, acousticians, statisticians, spatial analysts and environmental managers from around the world, who are developing new methods and procedures to link remotely sensed data with seafloor geology and marine biology within a geo-spatial environment. The next GeoHab meeting (GeoHab 2014) will be held in the coastal village of Lorne, located in southeastern Australia.