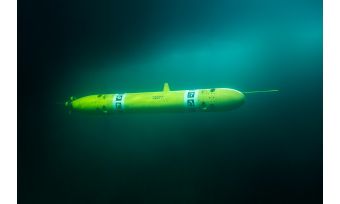 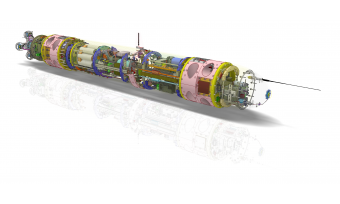 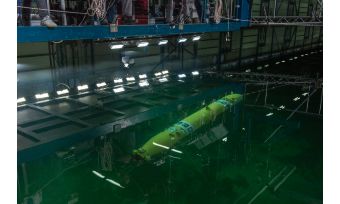 Autonomous underwater vehicles are becoming more and more common in the maritime industry, and technology is rapidly developing for different applications, such as inspection, maintenance and surveillance. Meanwhile, more advanced autonomous capabilities are required, to be able to perform complex tasks and challenging missions. The Maritime Research Institute Netherlands (MARIN) has designed and built a modular Autonomous Underwater Vehicle (mAUV) for research projects in its model basins. The objective of this research effort is to expand the knowledge of vehicle control and to gain a better understanding of autonomous underwater operations.

MARIN has a lot of previous experience with dynamic positioning (DP) systems for ships and offshore structures and with autopilots for sailing ships. It has also built free sailing models of submarines, which include autopilots and control with rudders and sail planes. Experience in these areas played an important role in the development of the mAUV. The challenge was to develop an underwater vehicle with full six degrees of freedom (DoF) control, without any limitations. Furthermore, the aim was a vehicle capable of efficient travel at high forward speed while also able to hover in a fixed position and orientation. This is a unique combination of capabilities.

The mAUV is now operational, with vehicle control and path-following available and tested. The next steps are autonomous capabilities, including advanced navigation, collision avoidance and additional actuators.

The vehicle concept development started with the definition of a number of (self-imposed) design requirements, including the ability to control in all six DoF, combining hovering with travelling at high forward speeds, and a modular construction, allowing for future modifications. The set-up of the control software is also modular, to allow easy reconfiguration.

Subsequently, the general vehicle lay-out, thruster configuration and main particulars were selected. The cylindrical hull shape was selected for its streamline, easy manufacturing, and the possibility to include additional segments for future modifications and additions. The bow section has a cylindrical shape and the stern section a parabolic shape, both of which have also been used in concept designs of submarines. This resulted in a geometry with good streamline properties. The length and diameter were based on the internal space necessary to place all actuators, sensors and electronic systems.

MARIN has a lot of experience with developing and building free running ship models for basin experiments, as well as submarines. This means that most of the necessary technology to design, develop and build the mAUV is available in-house. The vehicle design was centred around a 3D CAD model, which was continuously updated, as all sub-systems (electronics, motors, sensors, computer hardware, electrical systems, communication systems and software) were developed and finalized by the various technical specialists.

Several actuators can be used to control the position and orientation of the mAUV. These include multiple thrusters: four stern thrusters (main propulsion), four horizontal tunnel thrusters (transverse motions and heading change) and four vertical tunnel thrusters (vertical motions and pitch control). To reduce development time, readily available T200 thrusters from Blue Robotics were selected. Two internal trim tanks were also added at the bow and stern to adjust the vehicle’s weight. The capacity is limited, but sufficient to change from the floating condition to neutrally buoyant at the start of each mission.

The vehicle has several internal sensors for navigation and control. For example, it has an Inertial Navigation System (iXblue Phins C3 INS) to measure the vehicle’s attitude, acceleration and rotational speed. Aiding signals (position) are used to estimate vessel position and linear velocities. Finally, an Attitude Heading Reference System (Xsens Mti-300 AHRS) was added to measure vessel attitude and acceleration.

The mAUV can be controlled in all six DoF. This means that the vehicle can follow any track imaginable, offering maximum flexibility to perform its missions. PID control is currently used for the vehicle position and orientation, but alternative control approaches such as model-based control will be investigated in the future. During operation, the vehicle changes between different operational states, such as ‘idle’, ‘trim’ and ‘waypoint tracking’. Each operational state has its own behaviour. Switching between states is handled by the state machine, a part of the vehicle control system that defines the behaviour of the mAUV. If necessary, the state machine also performs safety procedures, using the operational states ‘brake’ and ‘surface’. This avoids possible damage to the vehicle in the case of technical problems, such as a thruster or sensor failure.

The control system of the mAUV was developed and tested in parallel with the design and construction of the vehicle itself. This was made possible using a digital twin of the mAUV. The digital twin is a time-domain simulation model of the mAUV, which describes the rigid body dynamics, hydrodynamic reaction forces, all 12 individual thrusters, ballast tanks and the internal moving mass. The model was made using MARIN’s in-house XMF modelling software. The simulated vehicle can be controlled manually by joystick, or linked to the vehicle control software. The digital twin is a complete representation of the vehicle dynamics and can therefore be used to design and test the vehicle control system. This allowed for the vehicle hardware and software to be developed in parallel. Furthermore, development and testing with a digital twin instead of a physical vehicle is much less time consuming, allowing the analysis and optimization of many different conditions.

After completion of the mAUV, the performance of the vehicle was assessed in a series of model basin tests. The advantage of testing in a basin rather than an outside location is that the environmental conditions can be controlled and access to the vehicle between tests is very easy.

After connecting the control system, all vehicle hardware components were carefully checked and all communication connections were tested. Then, a series of experiments were carried out in MARIN’s Seakeeping and Manoeuvring Basin (SMB). The first was a set of parameter identification tests, the objective of which was to determine the vehicle added mass and damping, as well as the maximum thrust values. These parameters were derived from the measured vehicle motions and the results were used to improve the accuracy of the vehicle’s digital twin. The second series of tests were operational limits tests to find the current performance limits of the vehicle. Maximum forward and transverse speeds were determined, as well as maximum rotational speeds. Furthermore, tests were carried out with the mAUV travelling at different drift angles. The last series of tests aimed to demonstrate possible applications of the mAUV. The demonstrations included manoeuvres that represented a mine inspection mission, a lawn mower pattern for a survey mission, a fast spiral, vertical positioning with the nose above water and a quay wall inspection.

A demonstration day was organized at the end of the test campaign, attended by representatives from various companies in the Dutch maritime sector. The many interesting discussions resulted in new ideas for potential applications of the vehicle and further research.

The mAUV is currently capable of following a predefined track, defined in six DoF. For real autonomous operation, however, additional capabilities need to be developed. Several topics are on MARIN’s research agenda, including relative navigation for precise navigation near fixed objects (e.g. docking stations, underwater structures) or other vehicles (e.g. moonpool for launch and recovery). These research efforts will involve hardware development, position estimation algorithms and vehicle control strategies. MARIN will also look at additional actuators for more efficient vehicle control at a higher forward speed. This will involve actuator design, vehicle control strategies and allocation algorithms. Lastly, sensor fusion and situational awareness algorithms will be used to investigate the performance of lower cost motion sensors. For certain applications, this may be an alternative to a navigation grade INS.

MARIN has designed and built a modular Autonomous Underwater Vehicle (mAUV) for research projects in its model basins. The vehicle has unique control capabilities that may be applicable for different autonomous tasks in the maritime domain. The vehicle, its control system and its capabilities for autonomous operation will be further developed through ongoing coordinated research projects. MARIN actively seeks partners to continue developing the mAUV technology. Finally, it aims to assist industry parties in their vehicle developments, using simulation studies and basin tests that focus on vehicle design and optimization.