The Mobile & Marine Robotics Research Centre (MMRRC) has grown out of the Department of Electronic & Computer Engineering at the University of Limerick (Ireland), with research, development and commercialisation funding from a variety of government and semi-state bodies.

Since 2003 the MMRRC has been developing novel underwater technologies to aid high-resolution sonar and video seabed imaging, near intervention operations and real-time mission simulators to support the advancement of marine sensing platforms and to improve the state of the art of underwater vehicle positioning and navigation control. The MMRRC has also built up survey expertise and provides offshore operations support and collaboration on projects with marine scientists and research institutions around the world. Numbering nine researchers, the MMRRC now embarks on its most ambitious project to date.

The MMRRC has conducted several high-resolution near-seabed surveys of wrecks and benthic flora and fauna. On one such mission in June 2005, engineers from the MMRRC together with a scientific team from the Department of Earth and Ocean Sciences of the National University of Ireland (NUI), Galway, carried out the first-ever Irish-led ROV habitat mapping survey. Using a leased ROV, the MMRRC were responsible for the integration and operation of the high-resolution acoustic mapping module with precision navigation. Using their expertise, they developed new communications protocols, parsers and processing software to integrate a set of instruments never previously done. These instruments included a RESON 8125 sonar multi-beam echosounder, an IXSEA PHINS fibre-optic gyroscope-based inertial navigation system (INS), an RDI Doppler velocity log and a CDL MicroBath digi-quartz precision depth gauge with altimeter, as well as various camera systems.

Before ship mobilisation, this module was tested in a virtual underwater laboratory (VUL) designed to rapidly implement and test integrated
ROV/AUV control systems in a safe, simulated environment before real-world deployment.

Despite ROV-unfriendly weather and swell, the cruise proved a great success. The ease of integration of the INS with the ship-borne DGPS was demonstrated through the ultra-short baseline (USBL) positioning system, and accuracy down to a metre was confirmed. This showed what was possible with this new integration and provided valuable feedback to the instrument manufacturers.

To make innovative vehicle navigation and control, sonar and vision technologies attractive to the marine sector and to justify further investment, extensive open-water sea trials are necessary. As it is not possible to do this on leased vehicles, the MMRRC secured funding to construct its own ROV.

A key requirement was to maximise deployment flexibility by designing the vehicle to operate in harbours, in coastal waters and in deeper waters as far as the edge of the continental shelf. On the surface, the vehicle can be either towed at speed or self-thrusted by its own four horizontal electrical thrusters to allow it to surge, sway and yaw, which is useful in confined spaces or near hazards. The vehicle has been equipped with quick-release buoyancy modules, to enable it to become neutrally buoyant and thus be operated as a survey ROV with control in six degrees of freedom to a depth of 1,000m.

The vehicle system architecture also affords a high degree of flexibility for vehicle control and payload expansion. In its initial configuration, the new technologies include fault-tolerant thruster control, novel high-frequency sonar for operations centimetres off the seabed, onboard control with real-time disturbance reaction and autopilot/autonomous operation, topside augmented-reality system support, and an optical fibre umbilical and winch with eight optical passes.

The payload systems and navigation positioning instruments have all been used on previous surveys using leased ROVs and surface-towed pontoons, so the team is already familiar with their operation and method of integration. Testing of the complete integrated system is planned for Limerick Dock on the Shannon Estuary prior to trials aboard the RV Celtic Explorer this month.

This survey will be used as a test-bed for Ireland's first indigenously designed and developed Smart ROV system, the success of which will contribute to further research work, technology spin-out, commercial marine science and exploration surveys, and search and surveillance assignments. In addition, the training of young researchers in the operation and maintenance of remotely operated hardware and associated software will have cross-transfer training and technology benefits for an expanding marine industry.

Follow the sea trials of these new technologies in the next issue! 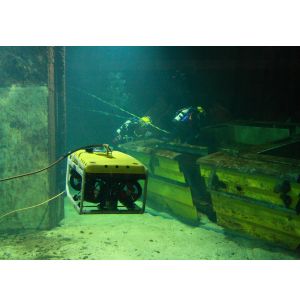