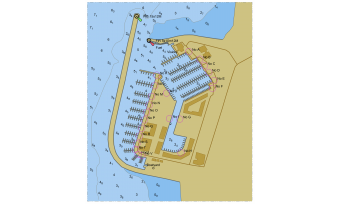 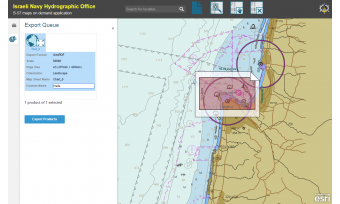 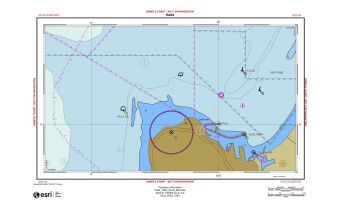 The Israeli Navy Hydrographic Branch (INHB) is transforming itself into a 21st-century organization. Moving away from traditional methods of generating hydrographic products, INHB has adopted geographic information system (GIS) technology. This forms part of the evolution towards a full modern Marine Spatial Data Infrastructure (MSDI). Speed of production, diversity of the products generated, and a closer working relationship with other departments have been among the key drivers of the transformation.

Established in 1976, the INHB’s mission is to produce all hydrographic and cartographic requirements for the Israeli Navy. That includes surveying, generating paper charts and ENC and nautical publication production. Like many other hydrographic agencies, the INHB has a small staff that satisfies an ever-growing demand for hydrographic products and information services. Given the limited resources, efficiency is important.

INHB is split between multiple sections. In the early days, only 10 staff members were working in the mapping and charting department. The workflows in the old charting system were time consuming, manual and complicated. At that time ENC production was a faraway dream. And yet, within the department, the mission was to create an automated integrated ENC production line allowing a handful of staff to maintain and update many cells spanning a significant area and various resolutions. Most of the INDB staff did not believe an organisation of this size could accomplish something as complicated as S-57 production.

Internally, it was recognised that the old chart production methods were inefficient. The process required the complete attention of high ranking personnel for every minor process, in minute detail. Developing new processes and workflows was time-consuming and difficult to maintain. Many such attempts were left unfinished and undocumented due to changes in staff and software updates, which rendered the changes obsolete. In addition, each department used different software, making it impossible to join the different databases and create an integrated product. A single chart took anywhere from a week to a month to produce.

Investigation into an alternative approach also looked at the tools used by the Israeli Defence Force (IDF) and other government departments. Particular note was made of the widespread use of the ArcGIS platform, and further investigation into this GIS technology showed it was both flexible and open. This meant the platform was highly scalable and provided ease of automation, offering the possibility of getting more done without needing to add resources. Overall, it was recognised within INHB that there was a need to move from what had been narrow inefficient methods, towards building an MSDI. That is a spatial data infrastructure which could be used to summarise activities, processes, relationships and physical entities. An infrastructure which could provide interoperability with land data and information (Figure 1).

The conclusion of the investigation was that GIS could help to modernise the processes and workflows. With the help of Esri, the global leader in the technology, the migration to GIS started in 2006. Data was a key first area of focus, i.e. generating a digital library of all assets and related data. In GIS vernacular that meant first building what is called a system of record. All data needed to be in a digital format, and stored together in one central geodatabase. That required converting the Navy Nautical Database to a Nautical Information System (NIS) and building quick and easy workflows for creating maps and charts.

During the early development stage the INHB worked closely with the Esri Maritime Team. The Esri Maritime Team helped with a number of challenges, and provided important training. INHB staff began using desktop GIS products for data collection, production, georeferencing, mapping, charting, and creating display maps and database management. Through web-based GIS it is allowed to share information with different departments and organisations. Also the FIS capabilities are extended to the field. Mobile GIS apps are used to work at sea and assimilate the data seamlessly into the database without additional processing.

Impact and Benefits of GIS Adoption

By implementing a GIS solution, the workflows are streamlined and automated. It is easier to delegate simpler tasks to less experienced personnel, freeing the more experienced team members to work on development and quality control. Training has also become simpler and faster, since the focus is on a single product suite. Staff are now able to work on different projects, using standard workflows.

Key benefits achieved through the adoption of GIS technology have included:

Many of the workflows are automated. Nowadays it is possible to produce a 50-map portfolio in a few hours instead of days (Figure 3).

The use of an enterprise GIS has helped INHB move from being a somewhat isolated department, to more closely interacting with other departments. Using a standard platform has simplified the integration of databases from the IDF and other government offices. This has greatly helped with data sharing. Working with a single software suite creates a common ground between the different departments, enabling lower training costs and higher diversity within the organisation. Standardising on a single platform means staff now no longer need to learn multiple processes.

Looking to the Future

Looking ahead INHB continues to evolve, and partnering with Esri has proven important in this process. The new S-100 standard will be operational in 2018, replacing S-57. Esri is helping to prepare for these changes, and together INHB and Esri are building a long-term partnership which will help to continue to take advantage of the many benefits offered by GIS.

The adoption of enterprise GIS technology has helped to improve how the small team works from day to day. The ’ENC first’ approach means more efficient production of navigation products. Creation, storage and visualisation of hydrographic information are all now available through a single convenient workflow. The speed of production has increased dramatically, as has the variety of products. Thanks to standardising on the same GIS platform as other government departments, INHB is more closely connected to the wider organisation. Overall, INHB is well positioned to meet the Navy's hydrographic needs for both today and tomorrow.