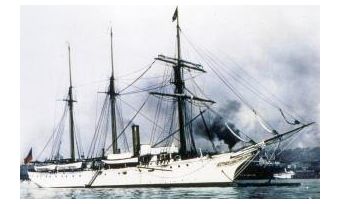 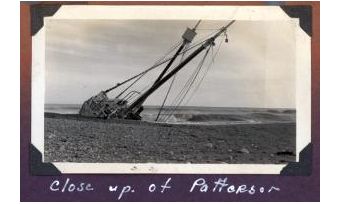 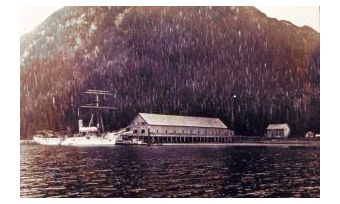 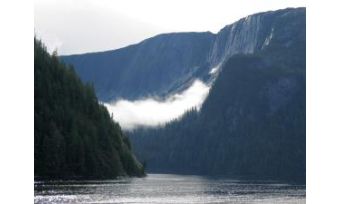 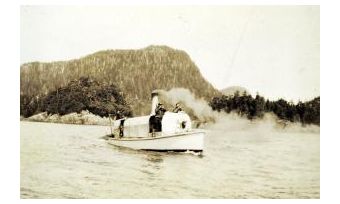 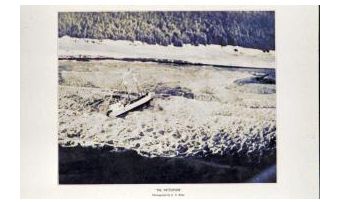 Great ships seem to develop a personality and sometimes even seem to be conscious beings with a life of their own. Such was the Coast and Geodetic Survey Steamer Carlile P. Patterson, a ship that spent over fifty years plying the waters of Alaska. Her keel was laid in 1883, two years after the death of her namesake, the fourth Superintendent of the Coast and Geodetic Survey. The ship was built in Brooklyn, New York, launched and commissioned in 1884. She was built as a barkentine with auxiliary power; she was 719 tons in displacement, 163 feet in length, and had a 27½ foot beam. Her first commanding officer, Lieutenant Richardson Clover, USN, also oversaw her construction.

After sea trials the ship began her trip to the west coast of the United States on 26 July 1884. This trip must have been quite pleasant with the exception of a few weather days as her first stop was in the Madeira Islands where the crew imbibed heartily in the local wine products and the ship probably stocked up for the long voyage to San Francisco as this was in the days before United States government vessels were required to be alcohol-free. The next stop was Rio de Janeiro where the emperor, Dom Pedro, came on board for a visit and the crew won a whaleboat race against entries from English, German, Italian, and French vessels. As the Patterson crew had transferred from other hydrographic ships, long hours of pulling oars on hydrographic duty assured their victory. Other ports of call were Montevideo, Punta Arenas (the southernmost city on earth), Valparaiso, Callao, Panama, Acapulco, San Diego, and Santa Barbara before arriving at San Francisco on 13 February 1885. The ship used San Francisco as her homeport for the next few years until moving her base of operations to Seattle.

After two months of refitting in San Francisco, the Patterson sailed for Alaskan waters on 26 April and began her career of over 50 years working in Alaskan waters. She began her life as a survey ship on 27 May at the south end of the Alexander Archipelago, a great labyrinth of over 1,100 islands and passages which includes the northern portion of what is known as the Inside Passage. The hydrography of the archipelago is characterised by deep channels of over 200 fathoms interspersed with random pinnacle rocks capable of ripping the bottom out of unknowing and unfortunate vessels. The ship was equipped with two Herreshoff steam launches named the Pirate and the Vixen. Prior to leaving San Francisco, Lieutenant Clover "had made composition hand-reels and stands for sounding with piano wire, to be used in the launches…. when mounted in one of the launches… we were able, when moving at a speed of eight knots, to stop dead, sound in two hundred fathoms, reel up, and be moving ahead again, full speed, inside six minutes…. For ordinary work I found a seven-pound hand lead sufficiently heavy." During the course of her career as a survey ship, she worked from Dixon Entrance at the south end of the Alaskan Inside Passage, as far west as Kiska and Attu in the Aleutian Islands, and as far north as Cape Prince of Wales on Bering Strait. In all, she probably conducted surveys on more than half of Alaska’s 31,000 miles of tidal shoreline.

The first 15 years of the ship’s life as a survey ship were spent plying the waters of SE Alaska. A mind-numbing number of geographic areas were surveyed making these little known waters safer for the mariners of the day. Not all of the time was spent casting the lead and doing triangulation and topographic surveys though. In one report, it is noted that more than thirty varieties of wildflowers were found within an area of three or four acres" at Pogibshi Point; among them, sweet peas, violets, columbines, flags, water lilies, and others known to warmer climates and more southern latitudes." Various officers on the ship also took great interest in the ethnography of Alaska, as the Patterson operated in the tribal areas of Tlingit, Haida, Aleut, and Eskimo native Americans. Naval officer Albert P. Niblack who served two tours on the ship wrote the book The Coast Indians of Southern Alaska and Northern British Columbia, which was published through the National Museum of the Smithsonian Institution. Niblack was probably the most accomplished of Coast Survey hydrographers to serve on the Patterson as he went on to become a vice admiral and head of Naval Intelligence during World War I. Following the war he was elected the third president of the International Hydrographic Bureau Directing Committee.

The difference in attitude concerning the nature of the topography by the various commanding officers of the Patterson is striking. Richardson Clover found the topography monotonous during the ship’s first Alaska season but others found "the shores abrupt, and the surrounding hills… high, rugged, and covered to a height of about 2,000 feet with a dense growth of timber." One commanding officer, perhaps having more in common with modern attitudes, referred to the scenery as ’grand’.

In 1899, because of the Klondike and Yukon gold rush, the Patterson was sent to survey the ’great bar’ off the mouth of the Yukon River. The ship operated between St. Michael and Cape Romanzof and also operated in the vicinity of Nome and in the southern Bering Strait. Over the next few years the ship returned to the waters of SE Alaska and occasionally engaged in telegraphic cable surveys extending up the west coast of North America. Perhaps to survey a harbour of refuge, the Patterson surveyed Kiska Harbour and the surrounding area in the far western Aleutian Islands in 1905. The following year the ship operated in Prince William Sound and thence for the next few years out to Kodiak Island, Cook Inlet, and the Alaska Peninsula with its associated islands. In 1913, perhaps because someone thought the crew of the Patterson deserved a break from their arduous duty, she was sent to the Hawaiian Islands for winter surveys.

By 1915 the ship was becoming worn out as a survey vessel. The annual report stated that the ship was "no longer serviceable for the exposed offshore work. In her weakened condition, exposure to a heavy sea might prove very serious. …" In spite of this, at the end of the Patterson’s field season of 1914, the Patterson’s new wireless radio picked up a signal from the Coast Guard cutter Tahoma that had wrecked on an uncharted reef in the western Aleutian Islands. The commanding officer, James Blaine Miller, defying the possibility of fierce autumn storms in the Bering Sea, set sail immediately from Dutch Harbour on 20 September and arrived at the wreck of the ship on what is now known as Tahoma Reef on 26 September. Although the official report said the weather was good, there was a 16-foot swell breaking over the reef at the time. After searching for two days, the Patterson found 29 crewmen on Agattu Island, over 100 miles from the scene of the disaster. The SS Cordova had found the other 58 members of the crew earlier so the Patterson returned to Dutch Harbour, a 1600 mile round trip in all. The old ship outlived her young captain though, as the following year James Blaine Miller was a passenger on the Lusitania on a trip to Europe and lost his life when she was torpedoed off the coast of Ireland.

The Patterson was nearing the end of her survey career. The 1915 season was spent in the Shumagin Islands, south of the Alaska Peninsula, where the work was "unusually difficult owing to the precipitous coast, exposure to ocean swell, and the danger in making landing." The next two years the ship returned to the relatively protected waters of SE Alaska in the Sumner Strait area and Cross Sound. In 1918, the Patterson was transferred to the Navy and renamed the USS Forward and used for patrol duty on the west coast of the United States. The ship was never used as a survey vessel again. A year later she was returned to the Coast and Geodetic Survey, but the old worn out ship was sold to The Northern Whaling Company of New York. She was then refurbished and fitted with a much more powerful engine than the original 386 horsepower steam engine. She then engaged in the business of trading for furs and sailed through Bering Strait, around Point Barrow, and as far east as the mouth of the MacKenzie river in NW Canada. The trading stores consisted of everything imaginable, including phonograph needles, groceries, outboard motors and perfumery. The Patterson was sold again in 1936 and placed in the less hazardous work of carrying freight to Alaskan ports. Perhaps the old ship was feeling the weight of 53 years as on her first voyage under her new ownership, it ran aground in Cook Inlet in early October 1938. On her return to Seattle, she ran aground in Lake Union and almost crushed a houseboat. Returning to Alaska, she ran aground in Wrangell Narrows on 15 November but was able to work herself off. A few days later she met her end off Cape Fairweather, having gone adrift and blown ashore. This cape is only a few miles north of the northern entrance to the Inside Passage, the scene of so much of the Patterson’s work. Thus the old ship completed her life cycle near the area that she had served so well. She began her career at the southern entrance of the Alaskan Inside Passage and ended it over fifty years later just past its northern end. Perhaps she had chosen her final resting place.

Although the Patterson is little known today, the ship, her launches, and officers and crew are commemorated by the naming of numerous geographic features in SE Alaska. There are two Patterson bays, a Patterson glacier, Patterson Island, Patterson Peaks and two Patterson points. There is a Pirate Peak, Vixen Bay, Vixen Harbour, and Vixen Islands, all named for the ship’s launches. There are numerous features named after the Patterson’s commanding officers as well as crew. These names begin with Clover, Thomas, Mansfield, Snow, Moore, Pratt, and others. Perhaps the most interesting named feature was for the ship’s master-at-arms H. L. Ford who had a narrow passage with swift currents and shifting ice named Ford’s Terror in his honour. The Patterson left her mark on the still untamed shores of Alaska.