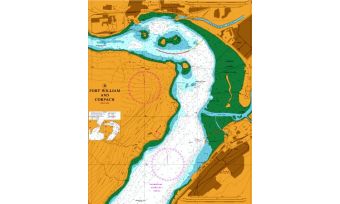 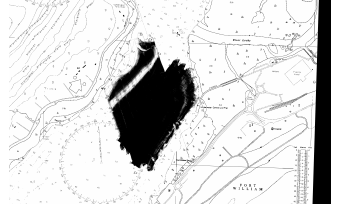 Due to their particularly shallow and turbulent thermocline, conducting seafloor mapping in lochs, fjords and other estuaries always presents a unique challenge to the hydrographic surveyor. Surface vessels often struggle to obtain accurate measurements due to the highly variable impedance of an estuary’s mixing layer, which causes frequent and significant changes in the salinity (and, by extension, density and temperature) of the brackish water. These rapid changes in the sound velocity of the mixing layer introduce a refraction error as sonar travels through the medium, and this error is extremely difficult to account for. This effect is especially prominent in lochs and fjords, where the mixing of fresh and salt water is so vigorous and close to the surface that, in many cases, traditional survey techniques utilising hull-mounted sonar simply cannot be used.

Upper Loch Linnhe is a shallow-silled loch in northern Scotland. One of the larger lochs on the country’s west coast, the loch is approximately 15 kilometres long and ranges in depth from 0 to 150 metres. The mouth of the loch leads out to Loch Linnhe at the Corran Narrows, a bottleneck less than 200 metres wide, where a sill 11 metres deep separates the upper loch from the much larger lower one (Figure 1). This narrow passage contributes to the sea-loch’s relatively strong cross-sill tidal currents, which encourage the mixing of sea and fresh water and make surface ship-based hydrographic surveying difficult.

The Fort William Underwater Centre is a training facility for commercial divers and remotely operated underwater vehicle (ROV) pilots, which is located at the landward end of Upper Loch Linnhe. In addition to a replicated offshore environment housing oil platforms and welding stations, the Centre makes use of 11 wrecked craft (seven ships and four tracked vehicles) that have been scuppered in Upper Loch Linnhe over the years for its training programmes. Divers and pilots in training use these resources to hone their skills before putting them to use in the field.

Collecting high-resolution images of these seafloor resources for use by the Centre’s students has proved particularly difficult, as data collected using surface vessels was often distorted by variability in the loch’s mixing layer. This was especially true in the areas immediately surrounding the Centre, as it is located approximately half a kilometre from the mouth of the River Lochy, the primary freshwater source of Upper Loch Linnhe. In addition to the natural challenges presented by the loch’s currents, the process of surface vessel surveying – acquiring a ship, arranging contractors and deploying – was a logistical and resource challenge for the Centre.

In June of 2014, the Centre decided to map the seabed of Upper Loch Linnhe using a low logistic autonomous underwater vehicle (AUV) provided by Kongsberg Maritime Aberdeen. Though AUVs are frequently used for surveying in open water, the vehicles have rarely been deployed to survey inland waterways. This was partly due to logistics, but also because shallow waters reduced the navigation capabilities of the vehicles. With the availability of military grade inertial measurement units, when coupled to Doppler velocity loggers and depth sensors, we have the ability to implement close coupled fully integrated inertial navigation solutions while previous subsea ventures would rely heavily on acoustic positioning only. This in turns gives the high levels of accuracy required to provide high-resolution imagery in shallow water surveying.

Recently, however, advances in positioning technology have created systems with high enough accuracy to provide reliable data for shallow-water surveying.

Using an AUV to map the loch seabed offered two important advantages over traditional hydrographic surface vessel operations. Firstly, because the AUV operates below the thermocline in the deep water protected by the sill of the loch, it is not subject to interference from the surface-level mixing of sea and fresh water. Most AUVs are capable of safely operating within several metres of the seafloor, which enables them to collect high-resolution acoustic data regardless of conditions in the water closer to the surface.

Secondly, AUVs that operate in inland waters require significantly less logistical support than surface ships. While AUVs that operate at depths below half a kilometre require significant infrastructure, such as a large support vessel with a dedicated launch and recovery system (LARS), vehicles that deploy in the relatively shallow water found in fjords are typically man-portable and can be launched from any pier or vessel of convenience. Together, these capabilities drove the decision to use a portable AUV to map the bottom of Upper Loch Linnhe.

A variety of equipment was used in the surveying effort. The AUV used was a Kongsberg Hydroid REMUS 100 equipped with a suite of sensors, including a Kongsberg Geoacoustics Geoswath Multibeam Echo sounder, Edgetech side-scan sonar and conductivity-temperature-depth (CTD) sensor. The multibeam echo sounder and side-scan sonar were used in tandem, which meant that a single AUV mission could generate both two- and three-dimensional sonar images simultaneously. Essentially we have a true side-scan mosaic representation of the seafloor but, in addition, the Geoswath allows us to give true xyz datapoints referenced to any particular datum allowing quantifiable measurements to be taken on the seafloor rather than relying on the shadow lengths as conventionally done when using solely side-scan sonar systems. The temperature and salinity information, along with all other sensor data, were available post-mission for analysis, allowing both temporal and spatial control of the collection.

Two missions were conducted in the area around the Centre’s private pier, in waters ranging from 8 to 68 metres in depth (Figure 2) referenced to lowest astronomical tide (LAT). The AUV was in operation for a total of approximately three and a half hours, with each mission lasting between one and a half and two hours.
Both missions were launched directly from a nearby tethered barge by a two-person team of AUV operators. The vehicle flew below the loch’s mixing layer and thermocline, which varies in depth due to the fast changing bottom depth but lies at approximately 8 to 16 metres. Therefore, its onboard sonar instruments were subject to significantly less noise and were able to gather data using much shorter pulse lengths than would have been possible from a surface ship. This enabled the AUV to generate extremely high-resolution sonar images of the wrecked craft on the seabed around the Centre (Figure 3). These two wrecked craft are located just off the Centre’s main pier, in water approximately 45 metres deep. They can also be seen in Figure 2, slightly to the West of the pier’s end.

The Centre can now use the data collected by the AUV to generate geo-referenced maps of Upper Loch Linnhe, which included the true locations of all wrecks of interest on the seabed. These maps, used in conjunction with an ultra-short baseline (USBL) positioning system, make it much easier for the Centre’s ROV pilots and divers in training to locate the wrecks and begin their work.

Lochs, fjords and other estuaries present a unique surveying challenge because they are subject to so many variables. Rapid changes in the refractive index in the water, caused by variations in salinity, temperature and density, have typically forced surface ship surveyors to live with data artefacts, essentially resulting in a low-resolution dataset. Lochs and fjords, in particular, are difficult for surface-based surveying, as the majority of their sea and freshwater mixing (and, by extension, their variations in impedance) occurs close to the water’s surface.

As the Centre’s experience mapping Upper Loch Linnhe shows, using an AUV can help surveyors overcome the challenges that estuaries present. Mounting instruments on an AUV allowed vehicle operators at the Centre to fly below the mixing layer and collect data of significantly higher resolution than would have been possible using surface ship instruments. Additionally, the low logistical requirements of the man-portable AUV enabled Fort William Underwater Centre staff, working in conjunction with Kongsberg Aberdeen, to map the majority of their area of interest in an afternoon, eliminating the logistical requirements of a surface ship.