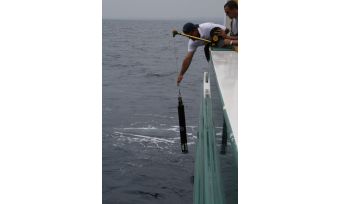 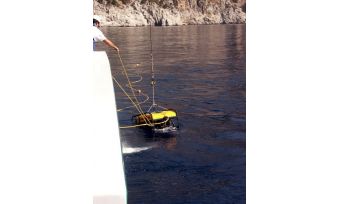 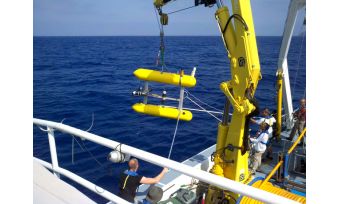 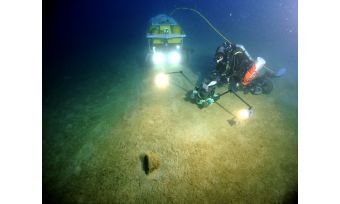 This article describes the internship programme that has been offered during six years while performing maritime archaeological projects in the Mediterranean. This collaborative effort between academia and industry provides affordable manpower, whilst interns have a chance to learn and experiment on significant discoveries as part of a closely-knit group. After their internship, motivated interns benefit from broad experiences and contract opportunities. This introduction to quasi-professional employment contrasts with typical commercial operations in terms of pressure and learning opportunities; an approach that translates into continued success for the organisation and the majority of summer interns being motivated to further their career in hydrography.

This is the best job anyone could ever have. Each prospective intern is told this during casual banter and discussion over studies and career plans. This is the best job anyone could ever have. Each prospective intern is told while casually discussing studies and careers. This is a summer job involving sun, exotic locations, and the opportunity to help rewrite history - and getting paid to do it. A great, low-pressure environment to experiment with a broad range of survey systems, this internship is structured to organically allow people to learn by doing. It is a unique opportunity to give young people the chance to explore hydrographic mapping techniques without the high pressure of commercial survey work. Yes, there are production goals, but this is a tightly-knit survey team and we help each other out. Personal memories of literally running from a helicopter into the chair of an unfamiliar acquisition system still linger. On-the-job training consisted of sitting in the inventory room and breaking out a litany of operation and technical manuals after a monotonous 12-hour shift looking at ancient cathode ray tubes. The soul-draining effort of trying to figure out a web of technical drawings and poorly written ‘training’ documents experience remain: as a strong reminder of how not to structure an HR policy.

The summer internships first came to be purely by serendipity.  A colleague of mine had been approached by a private maritime archeology foundation based in Key West Florida and passed along a recommendation. Having just been started, Highland Geo Solutions had an open slate. As it turned out, Dr. Jeff Royal of RPM Nautical Foundation (RPMNF) was attending a CARIS training course in Fredericton. It took all of five seconds to start laying out ways the two companies could help each other. An initial visit to the R/V Hercules in Malta was conducted to take a look at the operation.  The results of the changes made and the impacts have been presented at several venues such as the CARIS Conference and Femme. Part of that improvement process was the provision of a commercial marine surveyor to oversee the summer survey operations. One outstanding issue that came to light was the survey technicians being used. RPM found the selection process to be a drain on resources and the results were not always satisfactory. We worked with RPMNF to broaden the scope and to incorporate potential employment opportunities as an add-on to the summer program. The program quickly took shape with a three-pronged approach: encouraging student participation, gender advancement, and employment opportunities. Royal recalled RPM really needed somebody riding the front wave of technology and working with industry helped address that deficiency.

The first approach of the program had students participating in some very exciting archeological programs throughout the central Mediterranean. These regions introduce students to the local culture and a long maritime history dating back to the ancient Greeks. For example, survey work in 2005 and 2006 spanned the central Mediterranean and resulted in numerous shipwrecks discovered off the coast of Marmaris, Turkey and in Eastern Sicily. One of the goals of the Sicilian project was identifying and the site of one of the most significant naval battles of the classical age. In 264 B.C. the Romans and Carthaginians were caught in crises similar to a more familiar calamity repeated two millennia later. As the military escalation in Serbia hurled the world into World War One, a global conflict that saw the end of no less than four Imperial dynasties (Russia, Ottoman, Germany and Austria-Hungary), so too did an isolated conflict in eastern Sicily catapult the ancient western Mediterranean into to the largest military conflict up to that time: The First Punic War. Rome emerged the victor and annexed widespread territories as a result of this war and stood sole superpower of the entire western Mediterranean for centuries to come. Key to their success was the development of a powerful navy. After early growing pains, the Romans engaged the Carthaginian fleet off the western coast of Sicily and soundly defeated it. Since 2008, RPM Nautical Foundation has committed a great deal of resources mapping this area. To date, artifacts include eight ship’s rams (Rostrum) and four legionary helmets, with further ROV investigations of multibeam targets to be carried out this summer.

Other large mapping projects have also been ongoing on the Adriatic coast as part of the Illyrian Coastal Exploration Program (ICEP). In the course of assisting the countries of Albania, Montenegro, and Croatia in cataloguing their maritime heritage, some noteworthy discoveries have occurred in the form of both ancient and modern wrecks. To date, this work has resulted in the discovery of 20 ancient wrecks and the recovery of artifacts such as amphoras, tiles, and a sprinkling of other items. Additionally, a number of First and Second World War wrecks have been discovered and/or mapped along the Adriatic coast. The circumstances surrounding the mining of the destroyer HMS Volage have had interesting modern implications [Archaeology; Mar/Apr2011, Vol. 64 Issue 2, p26].

Discovery of the bow section of this ship reopened a case of cold war subterfuge gone wrong when in 1946 the ship mysteriously struck a mine. Insisting Albania had mined international waters and demanding reparations, the British could not explain why the bow section of the vessel was recently found well within Albanian territorial waters. Years of work still lay ahead investigating recent finds and mapping other areas of interest.

It has been a long standing practice for RPMNF to actively encourage female internship candidates in order to promote female participation in science, technology, engineering, and math (STEM) related studies and careers. Dr. Royal pointed out anecdotally in his experience females were underrepresented in the marine mapping field. This has certainly been the author’s experience in industry as well. A quick scan of Highland Geo Solutions’ current pool of contractors and professional network illustrates the gender disparity further; only 13% are female. A 500 member sample of one of the hydrographic social networking groups indicates only 9% are female. Another hydrography-themed educational group has 33% female members registered. Moss-Racusin (2012) shows women in the STEM fields are still facing barriers when competing with males in terms of perceived competence and qualifications. Figures presented in “Women in Energy: Closing the Gender Gap” confirm companies like Shell have been compelled to work towards a gender balance and have established quotas for female technical staff at 20%. One in three RPMNF internships has been filled by female candidates. A policy of encouraging females in STEM is promising, but it is clear there is further to go.

Finally, the internship program focuses on career development by actively trying to mold interns’ career trajectories by progressively introducing more responsibility. Students who participate as interns can often come back as the surveyor in charge during successive years. At this point, the work really starts to involve survey management, shift supervision, and mentoring. Additionally, interns are acquainted with the business aspects of contract work such as expenses, taxation, invoicing, and investing in one’s own professional development. This program gives the interns so much hands-on responsibility that when they do get into more demanding situations, they have the skills to succeed. At no time are interns ever intentionally thrown in over their head; they walk away from the program feeling really positive. They have had a chance to put in practice what they have studied in school. In the proper operational environment, if they put the effort in they actually enjoy the work. The statistics say it all: of the internships offered, half of the interns have elected to go into industry. The remainder have gone on to government hydrography, education, or to continued studies in science and engineering, including one person doing their Category A certification and two people currently working towards their Doctorate of Philosophy degrees. Only one of the interns elected not to continue on in a field related to hydrography or mapping; that is nearly a 95% success rate.

There are further plans to expand the program both in equipment (provided by GeoMara, Inc.) and in scope via strategic partnerships with institutes such as the University of Malta, the Maritime Studies Program at East Carolina University, the University of Washington, the University of Southampton, the College of Charleston, and government institutes in Ireland, Malta, Tunisia, and the United States. According to Dr. Aaron Micallef, marine geosciences and seafloor mapping are new fields of research at the University of Malta. This collaboration has been fundamental to acquire both skills and data that allow the university to continue carrying out cutting-edge research into the future. In terms of interdisciplinary skill development and outreach, a new project is planned for September. Work with industry and academia has allowed the introduction of a 10-day course to introduce the fundamentals of survey and data analysis. The goal is to bring together differing skillsets, show them the tools, and how they work. Students will be collecting data for use with a various number of output products addressing geology, biology, archeology, and environmental components of the data collected. This course nicely follows up on the internship and should increase the number of survey software and hardware systems.

The overriding philosophy in the approach to teaching and learning by doing with the oversight of sector aspects still stands. Derek Smith, RPMNF Internship Coordinator feels although internship programs are often viewed as a revolving-door process where participants gain limited experience and then depart the organization, striving to build long-term relationships with the next generation of professionals and assure their continued growth is the key to future success.