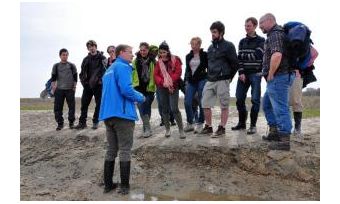 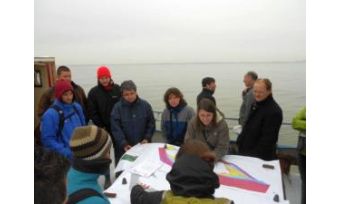 Experts on marine and river dune dynamics gathered in the medieval city of Bruges, Belgium, for the fourth conference on this topic from 15 to 17 April 2013. Initiated in 2000 by the North Sea Hydrographic Commission, the conference takes place once every four years somewhere around the North Sea. About eighty people attended the conference, mostly from universities and government institutions.

The hall of the Neo-gothic Provincial Court provided the conference with a beautiful atmosphere. There were keynotes from Prof. Maarten Kleinhans (Utrecht University, NL), Prof. Suzanne Hulscher (University of Twente, NL), Prof. Peter Thorne (National Oceanography Centre, UK), and Prof. Ugo Piomelli (Queen’s University, Canada). Topics ranged from laboratory studies to idealised morphological models to field measurements. There was considerable attention for biological influences on the observed rhythmic patterns, as well as for the grain size distribution of such patterns. In some cases, the coarse sediment is on the crests, while in others it is found in the troughs. Underwater life could either make the patterns firmer, or contribute to the suspension of sand.

In addition, there was a reception in the town hall, with plenty of the local beer, Brugse Zot, delicious but very strong. After the presentations, there was a conference dinner, and an excursion to the Western Scheldt and the ‘Zwin’ former tidal inlet — which was used by ships to reach Bruges. The siltation of the Zwin also meant the end of the prosperity of Bruges, according to the tour guide a city as large as London and Paris in the fifteenth century. At the end of the conference, the University of Bangor (Wales) announced that they will organise the next edition.