Measuring the Uncertainty of a Swath Bathymetric Sonar - 23/05/2013

A Statistical Analysis for System Performance and IHO Compliance 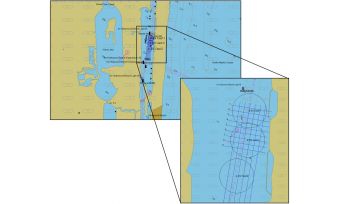 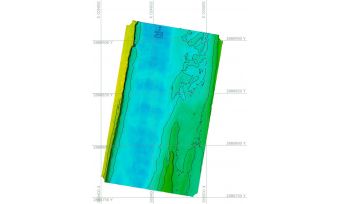 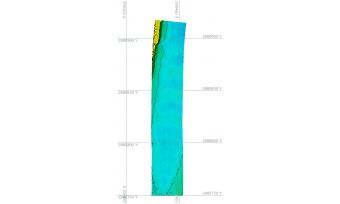 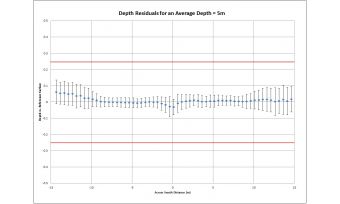 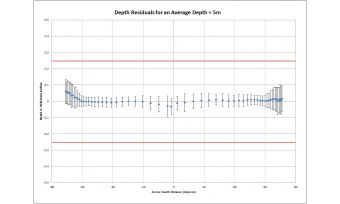 In the last few decades, substantial efforts have been made to improve and facilitate the way hydrographic data is obtained. One technology is the EdgeTech 4600, an interferometric phase difference sonar. Unlike traditional interferometers, the EdgeTech 4600 is the first of its kind to offer complete swath coverage of the seafloor, even at nadir. Combining this kind of coverage with a vertical accuracy that exceeds IHO Special Order requirements in depths less than 30 metres, results in a sonar with superior area coverage rates, especially in shallow water.

In the summer of 2012, bathymetric survey data was collected using an EdgeTech 4600 540kHz system deployed on a bow mounted pole aboard the Ocean Research II. Repeat surveys were performed over a navigational channel (~5m) within the Intracoastal Waterway just south of Port Everglades, FL, USA, with the aim of generating reference bathymetric surfaces and test lines. The reference surface along with the acquired test lines were compared and used to assess the performance of the system. This article explains the undertaken procedure and presents the results.

High frequency (100kHz to 600kHz) sonar interferometers (phase measuring bathymetric sonars or bathymetric side scans) have recently become a popular tool for shallow-water swath surveys, and now form an integral part of the surveyor’s toolkit. The interferometric sonar is a multi-stave side-scan sonar, collecting a wide swath of bathymetry and sonar amplitude data, with the angle of arrival of the seabed returns determined by phase comparisons between the multiple receive staves. The problem with these traditional interferometers is that they are susceptible to multipath interference and have very poor or non-existent bathymetry data over a swath width at nadir.

The EdgeTech 4600 is a new kind of interferometer engineered specifically to solve some of these interferometer shortcomings. It uses eight receive element transducers and one discrete transmit element in a pair of transducer heads, instead of the two to four receive channels found on other systems. The high number of channels enables enhanced rejection of multi-path effects, reverberation and acoustic noise. In addition, the 4600 uses EdgeTech’s Full Spectrum processing techniques that results in a dense dataset in the nadir region.

A-priori theoretical error models of interferometric systems are complex and have been difficult to reconcile with observed system performance.  A reliable system error model is required in order to apply sophisticated post-processing techniques, for example the CUBE algorithms developed at University of New Hampshire (UNH), to determine the uncertainty indications to use on datasets and charts. Direct empirical measurements of system uncertainty can be used to refine and verify the sonar models and ensure that the Total Propagated Uncertainty (TPU) applied in the data processing is consistent with real data as collected.

Statistical techniques for analysing and optimising the performance of swath bathymetry systems have been used for several decades, especially in the analysis of multi-beam systems. A well-used technique is to compare a single line of test data against a reference surface to determine the sonar depth repeatability and consistency across the bathymetric swath. While an independently surveyed reference surface with a higher accuracy than the system under test would be desirable, this is not often available and in practice is difficult to obtain when testing survey systems.

It has become accepted practice to test a system against itself, creating a reference surface using multiple passes in different directions, with tight data filtering, to create a very high data density which will average out errors. While this has limitations with regard to systematic offsets, the effects of

Once a reference surface has been generated a separate survey line is recorded over the test area and the two datasets can be compared. Statistical analysis of the difference will give a good indication of the precision of the sonar system in a single pass as a function of position across the swath.

In the summer of 2012, the ‘Alternative Approach’ was applied to analyse the performance of a boat-mounted EdgeTech 4600 540kHz sonar system. Repeat surveys were run over a navigational channel (~5m) in the Intracoastal Waterway just south of Port Everglades, FL, with the aim of generating reference bathymetric surfaces and reference test lines. The area chosen was the nominally flat channel south of the Port Everglades Turning Basin. This area was sheltered from swell and weather and was of sufficient size to allow orthogonal sets of 150m lines by 95m lines at 15m spacing as illustrated in Figure 1. A patch test area to the north of the survey area was identified and had a relatively flat dredged area and large boulders to enable roll, pitch, yaw, and latency calibrations.

When setting up the data collection for the reference surface it is important to pay meticulous attention to detail. Accurate equipment offsets and system calibrations were measured. Frequent sound velocity profiles were also collected to minimise ray bending errors in the final surface (Figure 1), and repeated patch tests were carried out to check the consistency of the system calibrations.

The sonar electronics and arrays for the 4600 were mounted onto a streamlined body that was deployed over the bow of the survey vessel via a pole. The standard configuration for the 4600 includes

Data acquired at the transducer was transferred from the transceiver at the sonar head to the processing unit in the survey cabin via Ethernet. In the Port Everglades tests, a complete NovAtel SPAN INS and Dual Headed GPS solution was used to measure

The height control in the final processing was achieved using manual tide inputs from the NOAA website.

The data were collected using EdgeTech’s Discover 4600 software and Hypack Hysweep Multi-beam software, which has a real-time interface for collecting 4600 inteferometric data. Post-processing was carried out in the office using Hypack Hysweep Editor (also known as MBMax). Note that the 4600 also interfaces to a number of other 3rd party bathymetric acquisition and processing software packages.

The data from each survey line was processed and filtered separately to remove outliers and water column hits (for example wakes and fish). Although the system is capable of collecting data from a swath of over 12 times water depth, the total swath width for the reference surface was trimmed to 4 times water depth in order to retain only the cleanest data. Care was taken to visually inspect the lines to check for outliers, blunders and bad data, and cross-check lines against each other to identify and eliminate calibration and offset errors. The full filtered data from all the reference lines were then combined to create a cleaned reference surface. This was binned by averaging to a cell size of 0.5 metre x 0.5 metre for export as a final digital terrain model (DTM). (Figure 2)

The same data collection and processing was carried out for the individual test lines and again these were binned to 0.5 metre x 0.5 metre (Figure 3) for comparison with the reference surface.  A grid of the differences between the reference surface depths and the test line depths was created, and multiple cross profiles were taken orthogonal to the boat heading along this line. Over 60 cross profiles were taken in order to generate the statistics for analysis.

The depth residuals shown in both Figure 4 and Figure 5 are considered to represent systematic errors or biases in the depth results. The standard deviations are caused by random error sources from the sonar combined with other dynamic error sources which change rapidly over the time taken to collect the test line (~100 seconds).

The mean depth residuals were plotted against the swath in metres (Figure 4) and then plotted again vs. swath in degrees (Figure 5). The depth residuals vs. angle can be used to compare the system’s results with that of a traditional single head multi-beam. The standard of measure for this discussion is the IHO Special Order Requirement (shown by the red lines), which states that the Total Vertical Uncertainty (TVU) equals +/- 25cm at the 95% Confidence Level. Using this, several features are apparent from these plots:

The Edgetech 4600 sonar system was tested in 5m of water and the data consistency between a reference surface and a test line was within IHO Special Order specifications to at least a swath width of 6 times water depth. The total useful angle of the EdgeTech 4600 system was shown to be 1.6 times greater than that of a traditional single head multi-beam system, leading to faster survey times and safer navigation while producing the same high quality bathymetry data.

The statistical analysis techniques applied here provided valuable information about the sonar’s performance and helped measure the data quality that can be obtained from the sonar system. The TVU values obtained will help inform sonar users and aid in the use of advanced post-processing algorithms with this data.

The authors would like to thank Mr. Thomas Hiller and Thurne Hydro for their valuable contributions during the investigation of the EdgeTech 4600’s system performance.

After completing her MSc in Ocean Engineering in 2010, Lisa N. Brisson has spent the last 3 years working at EdgeTech as a project engineer installing, testing, and providing training for hydrographic systems.  She is now involved in the design and development of interferometric and side-scan systems.

Steven Wright has been working at EdgeTech for the last 12 years as the director of Technology Development and has over 28 years of technical management experience in both small and large companies. Most recently, he has been involved in the development of compact sonar systems electronics, transducer arrays and swath bathymetry sonars.