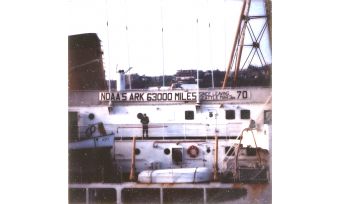 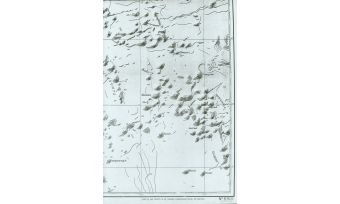 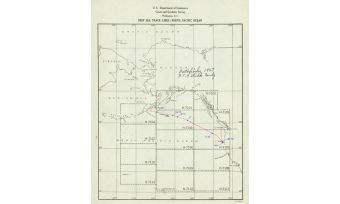 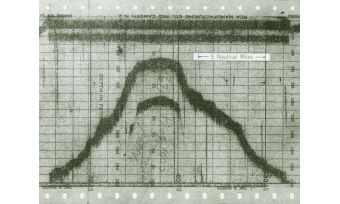 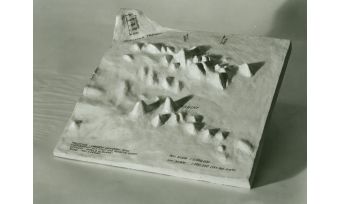 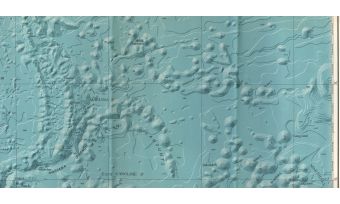 As noted in the previous issue of Hydro International, at least 200 seamounts had been discovered prior to the Second World War. The advent of acoustic sounding systems and the efforts of a few expeditions and organisations accounted for the majority of these discoveries. However, because of an increasing number of vessels equipped with sounding instruments and the far-ranging fleet operations of the United States Navy, discovery in the oceans did not stop with the coming of the Second World War. Warships equipped with echo sounders crisscrossed the world’s oceans. In particular, the Pacific ocean was fertile ground for the discovery of new features. A number of seamounts were sounded on and named by United States warships traversing the Pacific from the Aleutians to the South Pacific during this era. Detroit Seamount, Miami Guyot, Pensacola Seamount, and Cape Johnson Guyot are examples of features discovered during the course of various ship transits during the war.

The most remarkable effort associated with serendipitous bathymetric discovery during the war was that of Harry Hess, a Princeton University geology professor who was also a naval reserve officer. During the war he was initially navigation officer and then commanding officer of the USS Cape Johnson, a troop transport that made landings at both Leyte Gulf in the Philippine Islands and Iwo Jima, the latter being the scene of some of the fiercest fighting of the Pacific war. Hess operated a fathometer and maintained a record of the Cape Johnson’s track. As a result, he discovered twenty previously unknown flat-topped seamounts. In a review of sounding records acquired by other naval vessels (Hess gave credit to the USS Massachusetts as having acquired the most soundings and also noted the cruisers New Orleans and Chester, the hospital ships Solace, Bountiful, and Relief, and the survey ships Sumner, Pathfinder and Hydrographer as being quite active in acquiring soundings) and pre-war sounding tracks, Hess identified another 140 flat-topped seamounts – features that he termed guyots, named for the Princeton University geology hall which was a flat-topped building. Although Hess is often credited with the first discoveries of these flat-topped mountains, in a 1946 paper, he noted that others had discovered and mapped similar features. Ironically, Hess felt that the guyots he observed were of Pre-Cambrian age (600 million years old and earlier), implying a static seafloor. Ironically, a few years later, he became known as a founding father of the theory of plate tectonics.

In the fifteen years following World War II, the Coast and Geodetic Survey resumed its normal operations and continued running transects across the Gulf of Alaska and discovered a number of additional seamounts in this area and off the west coast of North America. Other government agencies and other nations were involved as well in somewhat sporadic mapping efforts. However, academic institutions, funded primarily by the United States Navy Office of Naval Research, traversed much of the world ocean and firmly established the ubiquitous nature of seamounts. Three academic institutions in particular were heavily involved in this effort - the Scripps Institution of Oceanography in the Pacific Ocean and the Lamont Geological Observatory (today the Lamont-Doherty Earth Observatory) and Woods Hole Oceanographic Institution in the Atlantic. These institutions, besides having their own vessels, oftentimes cooperated with other elements of the government such as the Naval Electronics Laboratory and the United States Geological Survey.

Initial explorations involved the Mid-Atlantic Ridge and the area off the east coast of the United States in the Atlantic by the Woods Hole vessel Atlantis. Its 1947 cruise netted a few seamounts and verified the existence of a seamount discovered by the USS Muir in 1945 on a cruise from Philadelphia to Dakar. In 1949, Maurice Ewing and Ivan Tolstoy surveyed Muir Seamount on the Woods Hole vessel Caryn in detail, perhaps the first peak so investigated by an academic institution. That same year they also discovered the Caryn Seamount and a number of seamounts associated with what is now known as the New England Seamount Chain. Over the next two decades, discoveries continued. Additional seamounts were discovered in the New England Seamount Chain and named for vessels of WHOI including Balanus, Asterias, Mytilus, Panulirus, and Bear Seamounts.

No academic exploration of the Pacific was made until 1950 when Scripps embarked on its Midpac Expedition to the Mid-Pacific Mountains. Scripps scientists working with Naval Electronics Laboratory personnel visited this area on the Scripps vessel Horizon and a navy vessel EPCE (R) – 857 southwest of the Hawaiian Islands and studied the great guyots found there. As opposed to Hess’s interpretation of these mountains as Pre-Cambrian, Edward Hamilton of the Naval Electronics Laboratory studied dredge samples from the guyots and discovered them to be of Cretaceous age and thus approximately 100 million years old, another clue on the road to plate tectonics. However, the Midpac Expedition and subsequent Scripps expeditions such as Capricorn, Shellback, Nova, Monsoon, Northern Holiday, and Downwind. netted seamount discoveries with Scripps Guyot, Capricorn Seamount, Horizon Guyot, Nova Bank, Baird Seamount, and even seamounts named for the wives of various Scripps scientists such as Gifford Guyot, Gifford Seamount, Valerie Seamount, Helen Seamount, and Betty Guyot dotting the charts. Not all of these names survived though as the name Helen Seamount and Gifford Seamount (southeast Pacific) do not seem to have survived although Gifford Guyot (southwest Pacific) did.

Academic seamount discovery was not always by ship though. In 1953, Robert Dietz of SIO was awarded a Fullbright scholarship to study underwater sound transmission at the University of Tokyo. While there he also became familiar with Japanese bathymetric chart 6901, which covered the northwest Pacific from the Asian mainland to 175 E longitude and from the Aleutians to 5 S Latitude. The first edition of this chart was published in 1939 and demonstrates how far ahead of western nation mapping efforts the Japanese Hydrographic Office was at that time. The Japanese had obviously mounted a systematic mapping effort over a multi-year period. The 1953 anglicised version of this map shows literally hundreds of seamounts. Study of this map led Dietz to naming the Emperor Seamount chain, Magellan Seamounts, Marcus-Wake Seamounts, and seamounts of the Marshall and Gilbert Islands. Dietz observed that, “The most striking aspect of the chart is the extensive groups of seamounts, some of which pierce the surface but others of which are deeply submerged. Many of the seamounts are truly enormous as can be realised by comparing them to the highest mountain in Japan, Mt. Fuji….” This one chart added dozens of seamounts to those known to western investigators.

Systematic mapping of the seafloor

After a number of years of exploration that tended to be targeted and somewhat random versus systematic mapping of the seafloor, the National Academy of Sciences commissioned a report concerning the future of oceanography. Chaired by Harrison Brown of the University of California, its title was Oceanography 1960-1970. One of its recommendations, championed by Chief Oceanographer Harris B. Stewart of the Coast and Geodetic Survey, was to systematically collect oceanographic data and map the ocean floor. Initially envisioned as a cooperative venture between governments and institutions, the C&GS was the only institution to embrace the concept. Subsequently, starting in 1960, the C&GS ships Pioneer and Surveyor, began systematic surveys of the west coast of the United States and north central Pacific Ocean. The programme was called Scientific Exploration and Mapping Program (SEAMAP). Prior to termination of the program in 1973, these ships logged hundreds of thousands of miles of bathymetry, gravity and magnetics. This author logged 63,000 miles of North Pacific Ocean on the Surveyor in 1970 on SEAMAP and a defence-related project. During SEAMAP cruises well over 100 additional seamounts (as well as further delineating fracture zones, ridges, sea channels, and other features) were added to the inventory of known seamounts including many of those in the Musician Seamounts north of Hawaii and those of the Coast and Geodetic Survey Seamount Province south of the Alaska Peninsula.

One of the last surveys conducted under the auspices of this project was of the Juan de Fuca Ridge area off the coast of Washington. In a graceful gesture, numerous seamounts in this area were named for academic and government investigators who had contributed to the mapping of the Pacific Ocean including Menard, Chase, Revelle, Shor, Raitt, Raff, and Vacquier Seamounts for Scripps scientists, McManus, Schaefer, and Thompson for those from other institutions, and various additional seamounts named for C&GS personnel and visiting international scientists including Srivastava, Macnab, Iwabuchi, and Kagami.

By the early 1970s, well over 2,000 seamounts were known (not counting those discovered in the course of classified United States and Russian surveys) and the impetus began shifting from geographic discovery and mapping of these features to understanding the geology, physical oceanography, and ecology of seamounts. Much of this was initially driven by the economic incentives of the fishing industry. In 1957, a tuna clipper, the Hurricane, discovered a bank far offshore from the tip of Baja California that was a locus of tuna concentration. Initially called Hurricane Bank, the tragic death of tuna researcher Bell Shimada in a plane crash in 1958 led to officially naming it Shimada Seamount. Subsequent exploration of seamounts has led to understanding that they occupy unique and fragile ecological niches in the world ocean causing perturbations in ocean currents, concentrating nutrients, providing stepping-stones for species migration, and serving as habitat for rare species of corals, sponges, and other creatures of the deep. Fortunately or unfortunately, they also are the site of seemingly economically viable, but sometimes unsustainable, fisheries resources such as orange roughy and other slow growing and slow to propagate species. In spite of the integration of disciplines to understand seamounts, the role of the bathymetrist and hydrographer remains. Although numerous discoveries of seamounts were made with old single beam sounding instruments on widely spaced tracklines, modern study requires resurveying with full bottom coverage in order to understand the bottom configuration prior to deploying high-value near-bottom instruments such as tethered robotic vehicles.

Although satellite-altimetry has helped reveal additional seamounts, there are still discoveries made by the method of the old sailing ships discovering reefs and banks. In 2005, the United States nuclear submarine San Francisco discovered an undersea mountain the old-fashioned way, by running into it. Hopefully nothing of this sort will occur again, but it underscores the fact that we still know woefully little of the 70% of our planet covered by water and are a long way from fulfilling Harris Stewart’s dream of a systematic mapping of the world’s  oceans. Perhaps it is time to revive the dream.