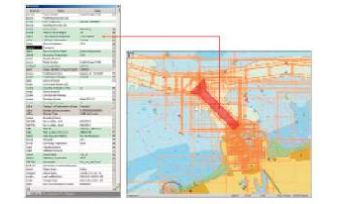 The Flemish Hydrography, part of the Flemish government in Belgium, is currently setting up and integrating a Marine Spatial Data Infrastructure (MSDI) for the Belgian coast, the canal Ghent-Terneuzen and the River Scheldt. This process will be done in three consecutive phases, of which the first is nearing its testing phase. The newly developed MSDI will harmonise the data between land and sea.

Not only within the Flemish government, but worldwide a shift can be seen in the appreciation and implementation of SDIs. Spatial Data Infrastructures tend to prove their use in all sorts of fields, ranging from spatial planning to nature conservation. Considering the implication harmonised data can have on the efficiency and accuracy in the fields of hydrography and maritime applications it is worthwhile to take a short in-depth look at the use of SDIs and the Inspire guideline.

SDIs and Inspire
In Europe the Inspire guideline is currently being implemented. Inspire stands for Infrastructure for Spatial Information in Europe. Inspire is one of the global guidelines for setting and using an SDI. Inspire was originally intended to harmonise environmental data. A positive side effect is that the introduction of Inspire enables the harmonisation of other types of geographical data.

The main principle of SDI is to collect and publish the data once, and after publication it can be used on numerous occasions. The three main components of an SDI are: technology (both hardware and software); procedures (what, how, where and when) and last but not least, treaties (for instance between the different government bodies).

Why a MSDI
As previously stated, the benefits of implementing a MSDI are widely acknowledged within the Flemish government. That is why the Flemish Hydrography will start to develop and implement such a MSDI for the Belgian territory at the beginning of 2011.

A MSDI contains both maritime geographical data as well as business information that enhance the use and access to spatial data.

A MSDI is part of an SDI (the overarching concept) and typically could contain information such as:
•Bathymetry (topography of the seabed)
•Geology and geomorphology
•Maritime infrastructure
•National, administrative and legal boundaries
•Protected areas, marine habitats
•Oceanography and climate related data
•Transport routes
•Tidal data (heights, stream and models)
A successful national hydrographic policy when implementing a MSDI should not solely meet the demand of international navigation; but should also offer a lot of extra benefits to the community.

Metadata
All data in the MSDI will have metadata associated with it to aid easy discovery. Metadata, or data on data, is an essential part of a successful SDI. In order to use data efficiently, quick and proper access to the sources and side notes of the data is needed. Inserting metadata alongside the data itself ensures a good mechanism of search and retrieval of necessary hydrographic information.

Set-up
In developing and setting-up the MSDI, the Flemish Hydrography decided to use the CARIS software. Basically, the hydrographic data, both bathymetry and nautical data, is stored respectively in two central databases:
•The Bathy DataBase (BDB)
•The Hydrographic Production Database (HPD)
These databases are located and maintained in Ostend. Through thick clients the two databases will be maintained by the cartographers at both Ostend and Antwerp.

In 2011, the bathymetric data shall be web-enabled in order to increase its availability to other departments within and/or outside the Flemish government. Preparations are being made to set up a test platform with the Spatial Fusion Enterprise on top of the new BDB 3.0 with an Oracle Database.

What do we need?
In order to be able to develop a proper MSDI in the first of the three phases at the Flemish Hydrography we need a number of things. The list below indicates the absolute essentials:
•High-resolution bathymetric data
•High-resolution terrestrial data
•Horizontal datum transformation parameters
•Vertical datum transformation parameters and separation models
•Good spatial cover – entire coastal, canal and river area
•Total consistent data

S-57 and S-100
Currently the ISO 19115 will form the basis of the MSDI. It is important to note that ISO 19115 does not go far enough with respect to metadata for bathymetric information and navigational aids. Some specific additional attributes are required. The data that resides in the MSDI core will be accessed through thick desktop clients, via industry standards formats like S-57, GSF and BAG:
•S-57 is the IHO (International Hydrographic Organization) standard format for hydrographic and nautical data
•GSF (Generic Sensor Format) is an open and increasingly recognised standard format for the archived full density bathymetric data
•BAG (Bathymetry Attributed Grid) is also an open and recognised standard for the bathymetric surfaces or DEMs (Digital Elevation Model).

The access will be given through thin web clients which utilise GML and OGC formats like WMS, WMTS, WFS and WCS.

In the future, S-57 will be replaced by S-100. The transition from S-57 to S-100 will be carefully monitored by the International Hydrographic Organization (IHO). S-100 can support a wide variety of hydrographic-related digital data sources, and is fully aligned with mainstream international geospatial standards, in particular the ISO 19100 series of geographic standards.

S-57, S-100 and Inspire
Besides keeping track of the developments in the transition from S-57 to S-100, the IHO is keeping a close watch on the development of Inspire, and its possible implications for the S-100 standard. At the moment, preparations have been made to transfer S-57 qualified data up to S-100 standards. The IHO follows the evolution so as to avoid conflicts when Inspire applies and transfers the data to the new standards. This is one of the reasons the IHO has developed a guidance note for setting up a SDI – with special attention paid to the marine dimension.

From now on
The Flemish Hydrography, who is responsible for hydrographic and hydrometeorological data in Belgium, will set up a Geospatial Software Solutions provider using CARIS software to implement a MSDI for its hydrographic data. The data that resides in the database core of a MDSI will be accessed through thick clients, via industry standard formats like S-57 and BAG, or thin web clients that use OGC formats like WMS, WMTS, WTS and WCS. All the data that enters the MSDI will have metadata associated with it to aid easy discovery.
At the beginning of 2011, the first phase of the MSDI will near its testing phase. If everything can proceed as planned there will be a fully operational system by the second half of 2011.

Acknowledgements
I would like to thank Dr. Nathalie Balcaen, director Coastal Development and Guido Dumon, director Flemish Hydrography, for their support in the production of this article.