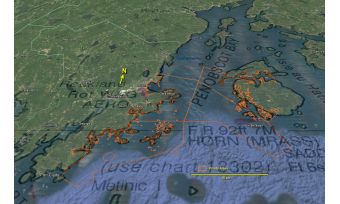 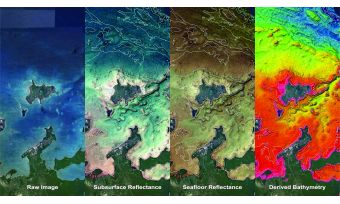 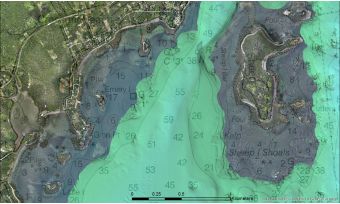 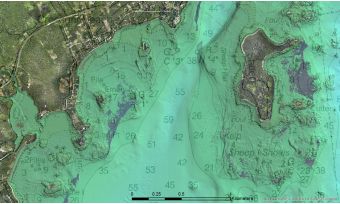 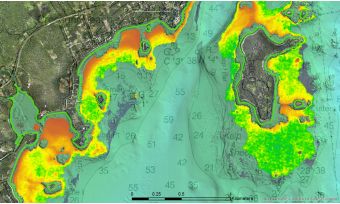 Fugro has tested a multi-sensor approach to balance growing data needs with limited agency budgets. Coastal mapping programmes are quickly becoming a priority for government agencies across the globe. The desire to better define and understand the land/sea interface is based on several interrelated factors, including sea-level rise and its impacts on coastal populations, the growth of and reliance on a blue economy, and the need to maintain critical nearshore habitats in the midst of a changing landscape.

In support of its hydrographic charting programme, the US National Oceanic and Atmospheric Agency (NOAA) Office of Coast Survey contracted Fugro to provide surveying services in Penobscot Bay, Maine, USA during the summer and autumn months of 2016. The project site encompassed approximately 370 square kilometres in an area characterised by a vibrant lobster fishing industry and high vessel traffic. According to NOAA, most of this area had not been surveyed in more than 60 years and a modern hydrographic survey was needed to update official nautical charts (Figure 1).

The original task order called for data acquisition using multibeam echo sounder systems (MBES) mounted on coastal-capable vessels. But given the bay’s jagged and rocky shoreline, Fugro considered that a vessel-based survey of the nearshore waters would prove time-consuming and potentially dangerous. While large numbers of submerged rocks were previously marked on existing charts, these vintage datasets were created before the age of full-bottom coverage ensonification. As a result, crews would need to navigate slowly to avoid uncharted hazards. Additionally, the survey was scheduled to take place at the peak of the lobster season, which would further hamper productivity due to the high density of lobster trap rigging and the constant need to avoid entanglement.

In an effort to streamline the survey schedule, reduce the number of required personnel and mitigate property damage and personnel safety, Fugro worked with NOAA to develop a survey plan that would combine vessel-based MBES with airborne Lidar bathymetry (ALB), exploiting the benefits of each sensor system for a faster, more cost-effective programme. The use of ALB was focused on shallow-water areas with a depth of less than 8 metres. This portion of the survey met NOAA charting requirements for least depth information in a safe and efficient manner. Additionally, reflectance imagery generated from the full-waveform ALB was used to extract natural and manmade coastal features near and above the water surface, allowing for the extrapolation of the mean high water line, used to represent the land boundary on nautical charts. Digital imagery acquired with ALB data collection also produced orthorectified imagery mosaics showing the features and conditions present at the time of survey.

Surveying with MBES and ALB technologies also motivated Fugro to undertake, at no additional cost to the client, the generation of satellite derived bathymetry (SDB) data in concert with partner EoMap GmbH, of Seefeld, Germany. The purpose of the SDB survey was to evaluate its deliverables against fully attributed and quality-assured active sensor data from the ALB and MBES surveys. This represented the latest in a considerable library of real-world data comparisons conducted by Fugro and EoMap to help quantify results in various regional scenarios and develop a strategy for the future employment and utility of the technology.

There are multiple ways to generate bathymetry from multispectral imagery sources. EoMap uses a physics-based method aimed at reconstituting the loss of visible and near-infrared spectral information that occurs when light from the satellite sensor travels through the atmosphere and water. By resolving these light-transfer issues, EoMap can retrieve the optical properties of the environment to normalise seabed reflectance measurements and provide water depth estimations.

A thoroughly designed workflow of specialised algorithms correct the raw satellite imagery for environmental artefacts — atmospheric aerosol content, land adjacency (high albedo - reflectivity of the earth's surface) and sun-glitter on the water surface, etc.— and then employ optical models derived for various regional water types. In this way, more accurate water depth estimations and seabed reflectance are produced. This process far exceeds what is possible by using empirical methods or photogrammetric techniques; the former being much degraded due to the reliance on uncorrected raw imagery, and the latter on sheer cost- and time-effectiveness (Figure 2).

The comparison of ALB and SDB was especially useful given the systems’ complimentary technical origins. Although ALB is an active sensing technique and SDB is a passive one, both rely on the physical properties of light transmission through the atmospheric and aquatic media. As such, both are able to achieve bathymetric results that overlap to a significant extent, mostly governed by SDB maximum depth detection. Correlation of bathymetric depths on the overlapping areas is one of the main points of interest in the evaluation of SDB methodology: at a minimum, the results achieved by SDB validate its use as a tool for survey project planning, complementing MBES and ALB surveys. Figure 3a, 3b and 3c show a sample area where all three data types overlay.

For NOAA, the primary benefit of SDB is the ability to generate data without the overheads inherent in active sensor surveys. The downside is that the absolute vertical accuracies of water depth extraction algorithms cannot yet satisfy nautical charting requirements in the stand-alone product. Users can, however, take the initial results from SDB and do at least three things:

It also enables recognition of the benefits of well-developed algorithms of satellite imagery to extract more robust seabed classification for habitat characterisation from the multispectral analysis. Notwithstanding the limitations of coverage with respect to depth and optical water clarity, habitat classification from SDB is at least on a par with similar modelling using MBES backscatter, interferometric sonar or bathymetric Lidar. There is logic to this supposition. A physics-based approach workflow, such as that developed by EoMap, aims to extract seabed reflectance as its primary result; in achieving that result, extraction of the water column (which we illustrate as water depth) is but an element of the process. Therefore, the algorithms associated with habitat mapping are not an addendum but fundamental to the entire imagery analysis effort. Coupled with other, higher-order survey data, however, SDB can also assist in creating hydrographic survey datasets that meet client specifications in a very cost-effective manner.

At the time of writing, the comparative analysis between SDB and the active sensor datasets is ongoing. The ability to mobilise multiple survey sensors from multiple platforms, acquire data from sensors that complement and reaffirm each other, and process data into a diverse range of data products and derivatives fulfils and surpasses the expectations of focused hydrographic surveying for nautical charting updates. It also offers results seminal for other applications derived from large-area baseline mapping. In the last decade, the hydrographic community has experienced the increased efficiencies of MBES surveys complemented with ALB for shallow-water and shoreline delineation. SDB furthers these gains by providing the information needed to plan safer and more cost-effective nearshore surveys.

The joint Fugro and NOAA paper on Multi-Sensor Coastal Mapping: Hydrographic Surveying and Beyond will be presented by Patrick Keown, physical scientist at NOAA during the Hydrography, Geophysics & Geotechnics session on 14 February 2017 at Oceanology International North America. He further explores the following project and processes. The event is taking place from 14-16 February 2017 in San Diego, CA, USA.