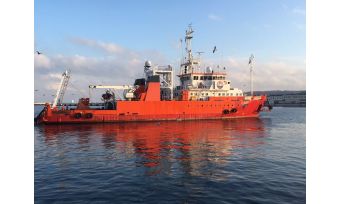 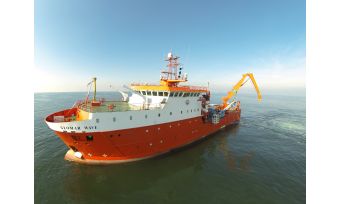 Glomar Offshore is a diversified ship management company based in Den Helder, The Netherlands, that operates in the global offshore support vessel field, with a focus on the North Sea and Baltic oil & gas and renewables markets. Deployment is focused on the survey, subsea (diving & ROV), offshore accommodation and access, and standby markets.

Glomar is a family owned, family-equity company. It was launched 10 years ago with 5 vessels and is still majority owned by its founder. During this decade, the company quadrupled in size, thanks to  proactive planning, an aggressive pricing strategy and a general boom in the offshore market. The company now has  a fleet of 19 modern units , and clearly wants to add more vessels to the fleet.

Klaas Weij, founder and CEO, says “the company’s expansion has been based on long-term partnerships, involving the design, construction and operation of vessels explicitly built for specific clients”. This illustrates the company’s management philosophy, i.e. to be pragmatic, modest and involved, and hands–on. Critical to this has been the parallel ownership of a shipyard in Gdynia, Poland, where Glomar can build, rebuild, retrofit, upgrade and maintain all its vessels.

Glomar currently employs approximately 35 people at the Den Helder head office, with half a dozen more based in Poland and Belgium. Having a full management setup, all technical, crewing, commercial, purchasing and QHSE activities are performed in-house.

QHSE superiority and competence, being one of the most important elements sought after by clients, is the cornerstone of the whole organisation and is highlighted in the company’s mission statement:

In addition to serving the O&G, Seismic and Offshore Wind industries with standby and guard vessels in the Dutch, German and UK continental shelves, Glomar is currently expanding into the Survey (both Geotechnical and Geolophysical) and Subsea inspection, maintenance and construction markets, with approximately 15% of the fleet dedicated to such activities. Either independently or together with joint venture partners that can provide specialised equipment, such as side-scan sonar, multibeams, CPTs, (WC) ROVs or more specialised tools, Glomar can bid on virtually any new survey tender or project in the market.

More specifically, the company purchased the DP1/4-point mooring Glomar Vantage (previously the Fugro Commander) last year, which has been mobilised with a drilling tower and large moon pool to allow for such activities. Adding to that, the purpose-built DP2 Glomar Wave can undertake both subsea activities, including light construction, as well as above water inspection, repair and maintenance, as she has the ability to be mobilised with a heave compensated offshore access gangway.

Glomar’s vessels are currently busy in campaigns in France, Belgium and Germany, with projects lined up in Scotland and the German & Danish Baltic during the summer of 2017.

What the Future Holds

In a market that has been hard hit by the severe drop in oil prices since 2015, it’s difficult to predict what the future holds. 2017 has shown some signs of stabilisation, both economically and politically, with government and corporate decision makers continuing, restarting or sanctioning new projects, especially in the Renewables industry. One contributor to this has been Energy companies that are now able to venture into new offshore windfarm projects without requiring any subsidies. Whilst a positive development, this has neither been sufficient to absorb idle tonnage, nor boost charter rates yet.

On the other hand, O&G companies have been more conservative. Although Seismic and Drilling campaigns are currently much more economical, majors have been sceptical of OPEC’s production decrease, of election and referendum outcomes in Europe and the US, and of tensions in the Middle East. Together with a brain drain in offshore clusters such as Aberdeen or Stavanger, a halt in R&D and a decreased appetite for new, untested technologies is evident. Smaller, ‘second tier’ operators, however, have been more aggressive in buying assets in the North Sea as this offers them a stable, mature and ‘bullet proof’ area of operations.

It is unlikely that a soar in offshore activity will happen before 2019. Yet, it is generally acknowledged that the market has seen the ‘bottom of the barrel’ and that increased activity can be expected in the Northern European survey market, with a potential regional focus in France, the UK and the Baltic states. Outside of mainland Europe, there is high anticipation of survey campaigns in the Eastern Mediterranean (especially Egypt) and Central/South America.