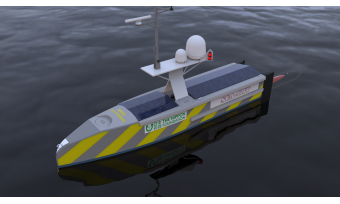 The GEBCO-NF Alumni team, which together with other teams has now advanced to the semi-finalsof the USD7 million Shell Ocean Discovery XPRIZE competition, is developing technology that can be used directly for mapping the ocean floor by the year 2030.

The aspirational objective of mapping the entire ocean floor by 2030 was announced by the chairman of The Nippon Foundation, Mr Yohei Sasakawa, in his acceptance speech at the ‘Oceans 8’ awards ceremony during the UN Ocean conference in New York, when he launched NF-GEBCO Seabed 2030, as a joint project of The Nippon Foundation and the General Bathymetric Chart of the Oceans (GEBCO).  As he said “understanding the bathymetry of the global ocean is imperative, not only for improving maritime navigation, but also for enhancing our ability to project climate change and monitor maritime biodiversity and resources”. He pointed out that less than 15% of the bathymetry of the world’s ocean floor is currently accurately mapped.

To this end, The Nippon Foundation plans to contribute USD18.5 million for the first ten years of the project. The plan is for Seabed 2030 to compile all available and newly collected bathymetric data into a high-quality, high-resolution digital model of the ocean floor and to promote international efforts to collect new data.

The work will be done through the establishment of four Regional Data Assembly and Coordination Centres (RDACCs) and a Global Data Assembly and Coordination Centre (GDACC) based at the British Oceanographic Data Centre, National Oceanography Centre. The RDACCs will be based at the Alfred Wegener Institute, Germany, covering the Southern Ocean, at the National Institute of Water and Atmospheric Research, Wellington, New Zealand, covering the South and West Pacific Ocean, at the Lamont Doherty Earth Observatory, Columbia University, USA, covering the Atlantic and Indian Oceans, and at Stockholm University, Sweden, for the North Pacific and Arctic Ocean.

Seabed 2030 will take responsibility for bringing collected depth data together, finding and highlighting the unmapped gaps, and helping to coordinate mapping by working with the established ocean mapping community within academia, offshore industry and government. A particular initiative will be to work with the fishing industry to increase the amount of data from fishing vessels that operate worldwide. Recreational and merchant vessels will also be approached. A working group with industry is planned through the World Ocean Council. An initiative of the International Hydrographic Organisation (IHO) on Crowd Source Bathymetry will also contribute.

The GEBCO-NF Alumni team in the XPRIZE competition, funded by The Nippon Foundation and the Sasakawa Peace Foundation, is made up of graduate fellows from The Nippon Foundation’s GEBCO Postgraduate Certificate in Ocean Bathymetry Training Programme, run at the Centre for Coastal and Ocean Mapping at the University of New Hampshire. The team is led by graduate fellows from Israel, Poland, Russia, the USA, South Africa, Japan, Philippines and Malaysia, as well as technical advisers from Norway, Canada, the USA, the UK, and New Zealand. All hold positions in their own country’s maritime industries, including within government, research organisations and hydrographic offices, and bring a variety of professional backgrounds to the team – ranging from engineering, software development, physics and offshore project management.

Among the goals of the team is to develop SEA-KIT, a groundbreaking unmanned multipurpose transoceanic survey vessel capable of deploying and recovering an AUV. The surface vessel will also serve as a data repeater station facilitating autonomous and remote operations in the maritime environment.

SEA-KIT, currently being built by Hush Craft Ltd, based in Essex, UK, has been designed to match competition goals but also to have the longer term Seabed 2030 goals in mind. Kongsberg Maritime, one of the world’s leading sonar and AUV manufacturers is working with Hushcraft on the SEA-KIT control systems. A Kongsberg HUGIN AUV, mounted with proprietary synthetic aperture sonar systems, will be used to collect bathymetric and imagery data. The AUV  is being provided by Ocean Floor Geophysics, based in Vancouver, Canada.

The semi-final of the competition will held in October and November off Puerto Rico and will significantly advance ocean mapping technology.