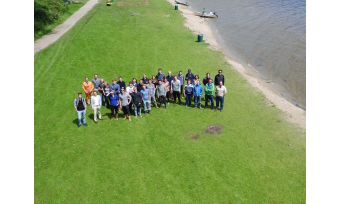 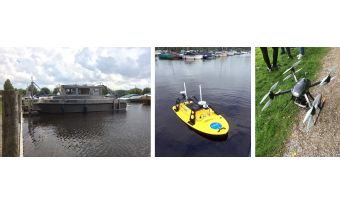 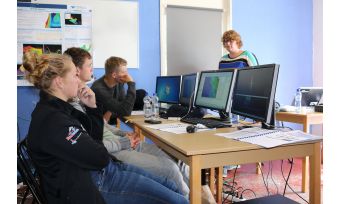 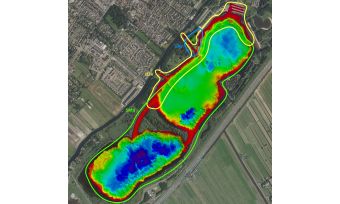 Twenty 3rd-year students of ocean technology from the Maritime Institute Willem Barentsz (MIWB, The Netherlands) participated in the 4th edition of the Lake Survey. Building on last year’s experience and together with three new partners, Teledyne CARIS and Fugro were able to enhance the programme. Three independent platforms were deployed to highlight the potential of modern-day surveying. A survey motor boat (SMB), an unmanned surface vehicle (USV) and an unmanned aerial vehicle (UAV) were used to acquire elevation data on and around the Vlietland lake in Leidschendam, The Netherlands.

Since 2013, Teledyne CARIS has organised an annual practical survey for Ocean Technology students from the Maritime Institute Willem Barentsz. The goal of the Lake Survey is to expand the experience of the young surveyors in a controlled environment. Sand excavation pits in the Netherlands have been the ideal theatre for this purpose. The lakes can be surveyed completely within the limited timeframe and the nature of the lake make for interesting bottom landscapes. Facilities and infrastructure around the lakes have made it possible to accommodate the people during the week. The number of students participating has increased gradually over the years. This is a positive development, but has provided some logistical challenges. The first edition in 2013 had only 6 students who camped in the backyard of the managing director, but this is no longer possible with 20 students. Luckily, the Vlietland has all the ingredients available and its owners welcomed us for the second year in a row. Facilities around the lake that were used include the marina, a briefing room, a processing room and the campsite. Split into 6 small groups, the students were offered a varying programme. The main priority was the practical side and the students experienced the entire survey process from mobilisation, through calibration and acquisition to data processing and product creation. Where possible, the equipment was operated by the students, under close supervision.

The Fugro Calibrator equipped with a Teledyne RESON Seabat T50-P multibeam covered the deeper areas of the lake. A Teledyne Oceanscience Z-boat with an MB2 multibeam, running CARIS Onboard processing, surveyed the shallowest areas and Skeye BV flew an Altura Zenith ATX8 drone with a 36 Megapixel camera over a part of the lake’s shore.

The Fugro Calibrator sailed from the Vlietland marina. The pole-mount makes it a suitable platform to be equipped with any available sensor. Teledyne RESON had offered to supply their latest multibeam sonar for this project. With a flange and network interfacing the T50-P was installed on the SMB. A Teledyne RESON engineer supported the installation and a boat driver and surveyor from Fugro supervised the students as they executed the survey. The students went through calibration before starting the survey lines. In addition to bathymetry, backscatter data was also logged. Water column data was collected over bottom objects and on an air hose present to improve the lake’s water quality. All data was processed in CARIS HIPS and SIPS by the students themselves.

The Z-boat was sent by Teledyne Oceanscience. It was fit with an Odom MB2 multibeam system. Operating in the shallowest and some inaccessible parts of the lake an engineer from Oceanscience and CARIS supervised the students while surveying with this unmanned platform. After an introduction to the system and its components, the students steered the boat manually with the remote control. Alternatively, the Z-boat was put into autonomous mode and sailed a defined line-plan. This USV ran CARIS Onboard near real-time processing. A processed DEM gave insight into the sonar performance and data quality over the system’s radio link. Reduced depths, TPU and coverage results were used to monitor and update the survey plan. The processed data from the Z-boat was merged with the data from the Calibrator into a full coverage dataset.

Skeye BV brought an Altura Zenith ATX8. The students learnt about drone surveys and inspections. A strip of land next to the lake was photographed in detail. A drone requires a licensed pilot to fly it, but the students were invited to come close and experience the behaviour of the vehicle in flight. Control points on the ground were set out to georeference the data during post-processing. Approximately 180 photos were stitched into one orthophoto. Due to the high amount of overlap between pictures a high resolution point cloud could be generated as well. The resulting topographic point cloud was combined with the hydrographic data in the final dataset.

The organisers had also set up workshops for the students. Various subjects were covered during presentations, demonstrations and hands-on sessions. The students learnt more about multibeam echo sounder systems, unmanned vehicles, aerial surveys, vision-based technology and (near real-time) data processing. The details and specifications of the equipment in use were highlighted, technology innovations were presented and collected data was processed by the students themselves.

The broad industry  representation gave the students an opportunity to learn about the latest evolutions in surveying. Teledyne RESON, Teledyne Oceanscience, Skeye BV, Fugro and Teledyne CARIS cooperated in this project, giving students practical experience in the field and the opportunity to use some of the newest pieces of hardware and software. Representatives from the companies organised lectures where the students learnt the theory behind them as well. In this way the students’ practical survey experience is backed-up with new knowledge on a wide range of survey and processing systems.

With a long career ahead of them, the students now have a better understanding of their future work, the systems and software being used and met potential international colleagues and like-minded people with whom they may work. The students camped together with representatives from Teledyne and Fugro during the week, which,  in addition to  a pub-quiz and BBQ evening, was a chance to get to know each other better and to network in a social setting. A great way to meet for both the students and the organisers. With one more year of study left, these bright-minded young surveyors will soon be ready for their jobs around the world.

All collected data was combined into one dataset and will be available for download with a free viewer at www.caris.com. Separate layers were created for the different sensors and data types. DEM, Mosaic and Point Cloud layers can be viewed in 2D and 3D together with background and vector product files. For more information contact info@caris.nl.