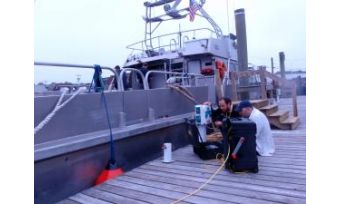 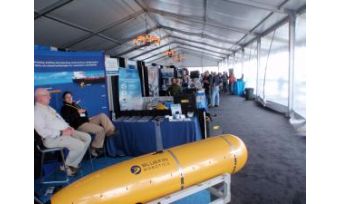 Ocean Tech Expo 2011 was held from 17 – 19 May on the waterfront at the Newport Yachting Center in Newport, Rhode Island, USA. This year’s event was the 5th in the Ocean Tech Expo series, and the second to be held in Newport.

Ocean Tech Expo is primarily an industry exhibition focused on ocean technology. Regional ocean technology companies and institutions from New England and the Canadian Maritime provinces provide the principal base of support.


A highlight of the conference was an evening event at which Admiral Gary Roughead, chief of Naval Operations, United States Navy, was presented with the Marine Technology Reporter Magazine's 'Seamaster of the Year' award. In his remarks, Admiral Roughead reinforced the importance of ocean technology in national defence and encouraged continued innovation and development in the field.
Conference panel discussions featured presentations and question and answer periods on a range of topics of interest to hydrographers and other ocean technology professionals. Panels were devoted to environmental measurement systems, ocean instrument development, defence and maritime security, hydrography and bathymetry, marine salvage and underwater vehicles and robotics. The hydrography panel included presentations on automated side-scan sonar target detection, mid-water software tools for multi-beam sonars, and use of AUVs for hydrography.


The exhibition was a primary feature of Ocean Tech Expo. The 45 exhibitors were arranged in two tents directly on the waterfront at the Newport Yachting Center. Attendance at this year's exhibition and conference seemed to have been dampened by rainy weather, but nonetheless, exhibitors with equipment like small ROVs were able to display their gear in the water directly in front of the exhibit area and others took advantage of the adjacent small-boat piers to show equipment like ROVs, sonar systems and AUVs aboard research and survey vessels. The Canadian province of Newfoundland and Labrador had a large exhibit featuring their ocean and maritime industries and institutions.