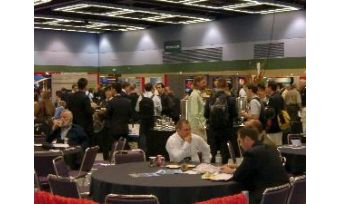 The OCEANS Conference, the yearly gathering of the community active in ocean engineering and marine technology, was held in the Washington State Convention Center in Seattle, WA from 20 to 23 September. Although held in the far west of the United States, OCEANS showed great influence from the Far East.

Keynote speakers were Nii Allotey Odunton, secretary-general of the International Seabed Authority, Liu Feng, deputy director-general of the China Ocean Mineral Resources R&D Association and Yoshio Isozaki, director-general of the Japan Agency for Marine-Earth Science and Technology. This year's event was a great success: more than 1,800 scientists and engineers showed up in the Emerald City. The conference, with more than 300 technical sessions with topics on renewable energy, coastal hazards, gulf oil spill and ecological studies on aquatic organisms, was accompanied by a large exhibition with 159 exhibitors from the United States, Canada, The Netherlands, South Africa, United Kingdom, Norway and Russia. New and existing technologies were showcased for an audience that was very international, the delegates having travelled to Seattle from more than 35 countries. The exhibition area experienced highs and lows in attendance but the set up was obviously good with all the coffee and tea breaks on the show floor. Overall, the exhibitors were said to be pleased with the quality of the visitors. On the conference side, all sessions were located very close to the show floor, with delegates having a wide array of topics to choose from thereby not always making it easy to choose. Ted Brockett, conference co-chair of the OCEANS '10 MTS/IEEE Local Organising Committee was convinced that this year's event was stronger than ever: "with a large and lively exhibition, cutting-edge technical sessions and outstanding plenary speakers", as he puts it. The location, Seattle, probably played a part in this. It will be hard to beat this next year in Hawaii, however beautiful, for a lot of people still remote and sometimes expensive to travel to. If the Local Organising Committee of OCEANS '11 succeeds in organising an exhibition and conference comparable to this year, it may well be worth going to anyway.
l