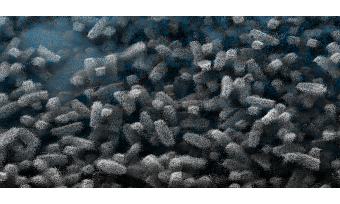 For hydro- and topographic surveying companies it is common to gather data in the field and process it into formats for presentation. Nowadays, technology  provides more and more solutions that enable analysis of the extensive amounts of measured data points directly, instead of the post-processed data and figures. Hence, using the raw data with fewer processing steps. Processing and post-processing of elevation data into maps, charts and cross sections will remain an important deliverable from a hydro- and/or topographic survey. However, the raw data itself will play an increasingly important  role with the availability of current technologies, as has been experienced by a recent survey.

CDR International BV and DEEP BV recently conducted a survey as part of a detailed investigation and remediation design study of a port basin revetment in Southeast Asia. Main goal of the survey was to visualise the current state of the completed revetment with high detail and to enable further analysis of the revetment and its component units. Within 2 years of construction of the revetment works unexpected settlements of concrete units (similar to ‘Accropode 1’ units) occurred in the armour layer, which could endanger the stability of the revetment over time. The concrete units weigh about 1.0 tonnes (with maximum dimensions of approximately 1x1x1m) and have protruding elements that should interact with neighbouring units to increase the overall stability of the armour facing. This interaction between units is called ‘interlocking’. The current state of the underwater facing needs to be visualised to be able to investigate the cause of the unexpected settlements; i.e. check interlocking placement, the slope stability and possible other defects. The actual placement of units can only be determined using high accuracy visualisation of the facing, which enables to distinguish interlocking placement or units simply laying on top of each other. Therefore the level of detail had to be very high. The usual approach in the past was to gather data during a survey and then to post-process to produce charts or other deliverables. Presenting the data using an open-source 3D point cloud software application (e.g. Cloudcompare) enabled the visualisation of the state of the revetment in more detail than the other presentation methods such as ordinary graphs, charts or maps.

The survey was performed by an aerial drone in combination with bathymetric survey. The bathymetric survey was executed with a dual-head multibeam echo sounder system (R2Sonic 2024), providing high-accuracy and high-resolution data of the armour facing below water level. The dual multibeam sonars were mounted with an angle to be able to minimise blind spots between the concrete units in the armour facing. Both sonar heads were tilted 45 degrees sideways and each pitched 10 degrees, fore and aft looking, to reduce the amount of shadow between the blocks. The bathymetric survey data was acquired using the software package QPS Qinsy 8.1. Each ping contained 256 beams for each multibeam head. With a 40 hertz operating frequency you gather 20,480 data points every second (256 beams x 40 hertz x 2 sonar heads). In addition, the data was checked and corrected for positioning errors and beam spikes using Beamworx Autoclean bathymetric processing software. Although state of the art technologies were used, processing of the point cloud involved a considerable amount of manual editing. The demanded high-resolution and level of detail resulted in over 600 million data points for a stretch of 1,200 metres of the revetment. No standard automatic cleaning filters for bathymetry could be applied as these introduce the risk of eliminating actual seabed and revetment features.

The technology used to survey the features above water level is photogrammetry. This technique was not sufficient to reach the required geometric accuracy. Therefore, more than 40 ground control points were used on the revetment to calibrate the resulting model. The photographs, the actual drone data, were taken with a multicopter flown at a height of 35m above the breakwater at nadir and oblique 45 degree angles. An overlap of 80% was pursued to enable robust means of checking the dense cloud of points from the pairs of stereo images.

For this project, an average of over 100 elevation points were extracted per square metre. Once the exact position and orientation of each image as well as the terrain elevation were determined a seamless relief image mosaic could be generated for the entire project area above water level. This was just one of the multiple ways to visualise the data.

Finally, the data from both the bathymetric survey and drone survey were combined to obtain a complete 3D model of the port basin revetment. It was not possible to create an overlap due to the lack of tidal range, hence a gap of maximal 1m in the vertical dimension remains between the multibeam and the aerial data (see Figures 1 to 3). The multipath of the sonar signals and the presence of turbulent water at the water surface resulted in low quality and noisy data in this range.

Directly after the raw data had been cleaned and delivered, further post-processing was performed to generate workable datasets and drawings to enable the required analysis. Normally the elevation measurements get averaged to reduce file sizes in such post-processing steps, leaving data redundant. However, the highest detail of visualisation was required along the entire revetment to investigate the actual placement and interaction of the concrete units locally. Therefore, the cleaned raw data had to be retained as much as possible to obtain the best results.
The survey campaign and subsequent data analysis was subject to a tight schedule of 6 weeks. For this reason the complete point cloud was converted into gridded datasets to enhance mapping and visualisation possibilities and to speed up processing time. Cross-sections were generated of the combined bathymetry and topography for every 5 metres along the stretch of the revetment based on the raw data, enabling analysis of the slope stability and identification of possible slope failures. This was set up in a comparative manner with a fixed baseline. The result was a map book which depicted a top view and a profile for each cross-section (see Figure 2). The gridded data was further used to generate longitudinal cross-sections, overview figures and depth charts.

The main purpose of the survey data analysis was to identify single concrete units along the whole facing, their position and interaction with neighbouring units and local gaps in the facing. Prior to the survey it was thought that the ordinary post-processing deliverables would enable the required identification of the units and the patterns. However, the post-processing results were not good enough to investigate the concrete units within the structure. Even when the resolution of the gridded results was kept relatively high (5cm by 5cm), compared to the size of the concrete units (1x1x1m), the interlocking effect of the units could not be determined properly.

Therefore, the project was forced to look into other methods to get the most out of the abundant survey points. The open source software for 3D cloud models was given more attention, and the raw data was converted to compatible formats for this software (like the LAZ format). In fact, all the points could be read one on one, without losing quality in the data by the effect of averaging.

The performance was not disappointing and during the course of the project this interactive means of visualisation became more and more important in the investigation and presentation towards the client. Distinguishing separate units and the interaction between neighbouring units was most visible in this 3D model. Based on observations from this 3D model further analyses and processing could be initiated, for example, by means of GIS software. The visual results obtained from the 3D model assisted us in effective allocation of cross-sections and mappings in GIS, and in building up a relevant GIS database for the entire project. In other words, the 3D model also helped to exclude certain post-processing steps, simply because some areas could be quickly determined as less relevant, based on clear 3D model observations. In the end, quantitative analysis on level differences and slopes could be performed well by the post-processed results, but a clear understanding of the formation of the revetment was provided by the 3D model itself.

The picture-like 3D model reveals details which are normally partly or fully eliminated if projected to a 2D scene. Especially the ‘PCV-shading’ feature of the 3D point cloud software visually conceals that it concerns an actual 3D model built up out of points. The greatest advantage of the 3D model is that the data is not transformed into a surface. All data points, including those from the bottom or sides of the elements which are projecting out of the surface, contribute to the image. This is ideal for the analysis of revetments built of units with protruding elements. Especially as the interlocking effect of the units is significant for proper functioning of the revetment. By means of the 3D model it could be observed that several units had not been placed correctly interlocking, sometimes simply laying on top of each other. In addition, local areas with significant sedimentation could be identified easily, both providing valuable information for the remediation design and eventual remediation works. The data will also be used during further re-construction as information source for the contractor and crane operators. Depending on the requirements of the client, a second survey may be performed after execution of the remediation works.

The fact that the engineer and client can fly through the 3D model and analyse the data easily was a major plus point in this case, and appeared to be more analytically suited than was initially expected.
A general comment on multibeam echo sounder surveys is that the majority of measurement points is discarded after processing and post-processing. In this project, the opposite is true. It can be said that the raw data was not as raw as the word implies; it constituted the most relevant information source of this project. Gridded DTM surfaces are not well-suited to the detailed and precise assessment on the critical position of concrete armour units in a built revetment. A very high level of detail is required to capture the status of the separate elements. Since these elements normally cover the entire facing of the revetment, the whole revetment needs to be surveyed with the same level of detail, resulting in enormous amounts of data. In that regard, the use of (almost raw) 3D point cloud data is a great aid to the visualisation and understanding of the condition of the single units in relation to the revetment as a whole. The applicability of this technique has now been tested on a revetment, but one can imagine that this technology could be of great value to the investigation of any marine construction built up out of single rocks, armour units or other materials. For most of these structure types the functionality and stability depend highly on the placement of the single elements.

Bas van de Sande is a GIS expert with a background in spatial planning and development, focused on the Marine and Maritime Sector. He works for CDR International BV
as an engineering consultant.

Eelco Bijl is technical director at CDR International BV and mainly involved in the design of Ports, Land Reclamations and Breakwaters, focusing on practical and expertise consultancy of Marine and Maritime works.

Jelle Tamminga gained a BSc in Ocean Technology at Terschelling last year. He now
works as a hydrographic surveyor for Deep BV in Amsterdam, and was one of the surveyors who conducted the survey described in this article.