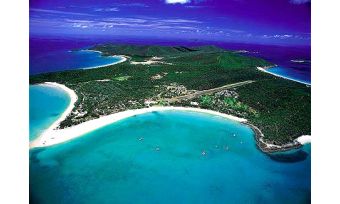 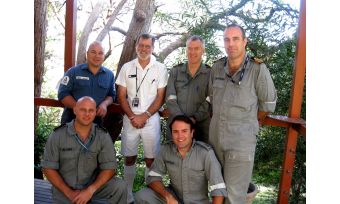 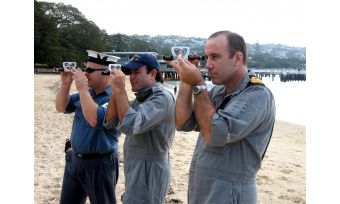 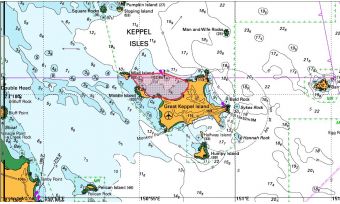 The Royal Australian Navy’s Australian Hydrographic Service has recently added to its survey capability with the innovative use of reservist hydrographic surveyors in a mobile survey team. Earlier this year, the new team undertook a proving survey on Great Keppel Island that tested the operational concept. Hydrointernationalreports on this new initiative.

"Happily, it is a profession of volunteers... to them, the interest is constantly kept up... the accuracy of the work of each assistant, when proved, is an infinite gratification to him, and he has also the continual satisfaction of feeling that, of all he does, a permanent record will remain in the chart that is to guide hundreds of his fellow seamen on their way."

The Australian Hydrographic Service (AHS) occupies a unique position in Australia, serving both a military and civilian role. It was established in 1920 and serves to provide up-to-date navigational products and ser­vices for mariners.

As part of the Royal Australian Navy (RAN) Hydrographic, Meteorological and Oceanographic Force Element Group (HMFEG), the AHS is responsible for conducting hydrographic surveys and for providing direct support to the Australian Defence Force (ADF) through the provision of hydrographic, charting, oceanographic and meteorology services.

The AHS is also the commonwealth government agency responsible for Australia’s charting and provision of hydrographic services under the terms of the UN Safety Of Life At Sea (SOLAS) convention and the Navigation Act.

Since the early 1990s, the AHS has had a mobile and operationally deployable unit to undertake difficult, unusual and often short-notice surveys in the Australian littoral, a region that includes the Australian Antarctic Territory. This unit (now named the Deployable Geospatial Support Team [DGST]) operates from the Austra­lian Hydrographic Office in Wollongong, New South Wales.

Recent deployments of the DGST include:

History and Concept of Operations of DGST-3

Australia has a long and proud history of military reserve forces. However, whilst there are thousands of military reservists in Australia, there had been no mobile – or deployable – team of geospatial reservist hydrographers. That changed late last year, with the creation of a dedicated DGST element as part of the Reserve Enhancement Capability Programme undertaken by the RAN in 2006. The programme’s aim was to provide real capability within the Navy Reserve forces to supplement and enhance the permanent forces.

Hence the creation of the DGST-3: a team comprised solely of Naval Reserves.

The basic concept of operations for the DGST-3 is to provide a surge capacity for hydrographic operations and to augment the output of the Permanent Navy Force (PNF)-oriented DGSTs. ‘Reserve survey teams’ undertake non-operational surveys in the Australian littoral, either as a standalone capability or by assisting other deployable survey teams.

The basic DGST-3 structure has seven positions with the possibility of up to three people assigned to each position. Therefore, it is conceivable in the mature organisation to have 21 Naval Reserves actively employed with the DGST-3 structure.

Once the DGST capability was approved, it was important to identify and recruit potential team members and then prove the capability in the first year.

The recruiting of members for the DGST-3 was focused on two groups: existing Reserves with a hydrographic or survey background or currently serving members of the Hydrographic Branch of the RAN who had either indicated an intention to transfer or to separate from the RAN.

Existing Reserves needed to demon­strate survey qualifications and reasonable currency in the required skill-sets and to give a commitment to serve for a defined period of ‘Reserve training days’.

This commitment varied from pos­ition to position, with an average of 33 days per Reservist.

The initial DGST-3 team demonstrates the diversity of professional skills brought together by the Reservist activity. Team members included:

All team members are ex-PNF with previous service in the AHS.

For this first deployment, the DGST-3 was assisted by a permanent member of the full-time DGST, Petty Officer Hydrographic Survey Manager Dean Forrest based in the city of Wollongong.

In April 2007, the DGST-3 team members undertook familiarisation training at the RAN Hydrographic School at HMAS Penguin in Sydney to prepare for its inaugural survey.
In June 2007, they undertook their first task to survey an inadequately charted area immediately to the north of Great Keppel Island. This first operational task for the DGST-3 tested out not only the hydrograph­ers, but also the operational concept.

Great Keppel Island is one of the most popular tourist resorts of the Great Barrier Reef Marine Park on Australia’s spectacular north-east coast. The area is used increasingly by cruise ships; no modern survey had been conducted in the inshore anchorage.

Four DGST-3 team members were employed, including the head of team LCDR Mark Matthews, LCDR Martin O’Malley, LSSR Nigel Jones and LSHSO Gary Hatton. ?The sheer enormity of distances in Australia gives an epic slant to even the most straightforward of hydrographic survey tasks. The team for the four-day project came together from the furthest corners of Australia: from Melbourne in the far south of Australia, to Cairns – 3,500km to the north.

The survey vessel and equipment was moved overland 1,200km from the AHS base in Cairns to the town of Yeppoon.

To make the most of the short time frame available, the team left the Rosslyn Bay Marina at first light for the one-hour transit to Great Keppel Island, and returned just before sunset each day. At the completion of four days’ work, the anchorage had been completed and the data was processed?

Whilst this particular project looks quite appealing to the outsider – spectacular scenery, a successful task – not all deployments are so enjoyable.

The question still remains: what is it that motivates these Reserves to dedicate up to one hundred days per year to what may sometimes be thankless tasks? Why do they leave the comforts of home, family and their day jobs to do this?

Whilst there is no single answer, general themes emerged across the DGST-3 team: currency of skills (in the Reserves), camaraderie and contribution.

“For me, the Naval Reserve provides an opportunity after twenty years in the PNF to provide my family stability and yet to maintain professional skills,” said LCDR Matthews.
“Deploying in small teams is something I enjoyed during my PNF career and provides the opportunity to undertake and complete discrete tasks in a short time frame.
“The capability provided by the DGST-3 will give the AHS additional flexibility in undertaking these small but important tasks, and will also maintain a body of skilled personnel who can augment the Service in times of need.”

LSHSO Gary Hatton agreed.
“I am in the Naval Reserves because of the implementation of the DGST-3. I like working in small teams such as the DGST because it is more hands-on. You gain more skills as you have to be conversant,” LSHSO Hatton added.
“The reason I leave the comfort of my full-time job is because it’s good to have variety in your life and doing Reserve work every year keeps my skills in tune.”

In some cases, adrenalin and a sense of adventure also played a part in the motivation to undertake Reserve tasks.

“The key challenges in this operation were achieving the task in minimal time and getting the team on location and working as a team with only half a day to mobilise once on site,” LCDR Matthews said.
“The highlights of the task were completing a task in just four days – that was an achievement in itself, but more importantly the oper­ation proved the concept of using a Reserve formation to supplement full-time units,” he added.

Whilst it is early days for the DGST, the evaluation from the task has yielded positive results.

Firstly, surveying work of real value was conducted to the benefit of the Australian community and to all visit­ors to the area around Great Keppel Island; and, secondly, there were recognised benefits across the RAN to have created this Reserve capability.

Yet, there are also issues inherent to the consideration of using Reserves.

“It is important to identify and recruit team members as they leave the permanent forces to harness their knowledge whilst it is fresh,” said LCDR Matthews. “It is also important to have annual refresher training for the whole team.”

The HMFEG has already established two PNF DGSTs and one Australian Naval Reserve DGST.
Future capability planning includes enhancement of current hydrographic ship crews with three detached teams to enhance the currently established capability.
…And it would come as no surprise to find that as the Reserves returned to their desks on the dreary Monday morning after the successful completion of their task off Great Keppel Island, they had already begun counting the days until their next deployment.