Earth Tides Observed by Gravity and GPS in South-eastern Alaska

Since the late 1990s, GPS has been widely used to study oceanic tidal loading (OTL). Various research has successfully shown the applicability of kinematic and static GPS techniques for estimating tidal displacements. Others have suggested that the accuracy of kinematic estimates is lower than that of static estimates and the height-time series is dominated by non-tidal effects.

The authors of the paper analysed gravity data obtained in Juneau and GPS data obtained from three PBO sites in south-eastern Alaska, and compared the obtained tidal amplitudes and phases with those estimated from the predicted tides including both effects of the body tide and ocean tide. Their results confirm that the precise point positioning (PPP) method, which was used to extract the tidal signals from the original GPS time series, works well to recover the tidal signals. Although the GPS analysis results still contain noise due to the atmosphere and multi-path, the authors conclude that the GPS observation surely detects the tidal signals with sub-centimetre accuracy or better for some of the tidal constituents.

Eddies in the ocean are ubiquitous. They exist with various spatial and temporal scales and many eddy current phenomena are studied widely. These features are often studied from space using presently available high-resolution sensors on a routine basis. Small-scale eddies formed in estuaries and coastal waters on 100m scales cannot be readily observed with existing satellite-based sensors on a routine basis. This paper presents such a study of a small eddy at an inlet of a wide bay using data obtained from an automated unmanned boat equipped with an acoustic Doppler current profiler (ADCP). The paper describes the development of the unmanned automated boat and presents results from site investigations.

The results show how a small eddy (diameter ~ 300m) in a tidal channel has been measured and analysed in 3D in detail. The mechanisms of formation have been described and the authors anticipate that more studies on small eddies and their impact on biological activities in coastal and estuarine environments will follow.

Dynamic positioning (DP) of mobile offshore drilling units means to automatically maintain vessel position exclusively by means of the thruster force. When failure happens, the vessel may lose the capability to maintain position. This can result in stopping drilling operations or, in the worst case, a subsea blow-out. The safety of DP on mobile offshore drilling units for drilling operations is analysed in this paper. Previous failure experiences have demonstrated that erroneous position data from DGPSs had caused DP systems to drive the vessel to an erroneous target position, resulting in a drive-off and loss-of-position incident. This paper aims to reveal why erroneous position data could be generated from DGPSs and to identify measures to prevent this from happening.

Starting in the 1970s, surface drifters and subsurface neutrally buoyant floats have been developed, improved and tracked in large numbers in the ocean. For the first time, we have now obtained worldwide maps of the surface and subsurface velocity at several depths. New profiling floats are measuring and reporting in real-time the evolving temperature and salinity structure of the upper 2km of the ocean in ways that were impossible a decade ago. These measurements are documenting variations of the world ocean's temperature and salinity structure. The new data are revealing insights about ocean circulation and its time variability that were not available without drifters and floats. The paper gives an extensive description of the types of drifters and tracking systems that have been used since the 1970s. 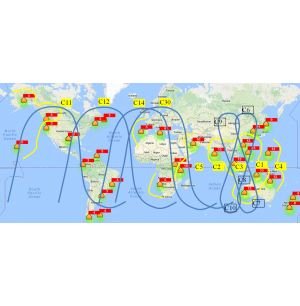