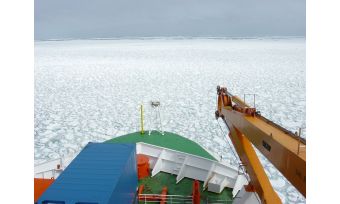 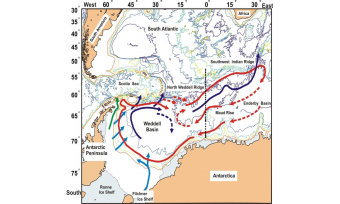 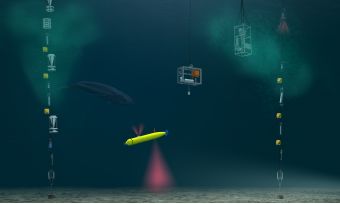 Located in the Atlantic sector of the Southern Ocean, the Weddell Sea generates extremely dense bottom water that spreads into all the world’s ocean basins, transporting oxygen, CO2 and other solutes. Everything that is added here is transferred into the abyssal oceans, including anthropogenic CO2. However, changes are taking place in the Weddell region that will have an impact on other oceans and on the global climate.

The Weddell Sea (Figure 1) is a huge embayment between the Antarctic Peninsula and the Antarctic continent, situated at the southern edge of the Atlantic Ocean. The boundary of the Weddell Sea to the south is formed by the Filchner-Ronne Ice Shelf, the greatest floating ice volume on Earth. It is a remote, relatively inaccessible part of the Southern Ocean – the huge sea expanse that surrounds the continent of Antarctica (Figure 2). The water circulation in the Weddell Sea is characterized by an elongated gyre (a kind of huge eddy), the Weddell Gyre, which extends beyond the Weddell Sea towards the north and the east. The vigorous water transport of the Weddell Gyre is driven by the strong westerly winds in the north and easterly winds in the south, both of which are due to typically stable weather patterns in this region.

Some of the strongest winds and the highest waves in the world occur here: the roaring forties and furious fifties are well known. In austral winter, almost the whole of the Weddell region is covered by sea ice, while in summer the ice cover almost entirely retreats, except for perennial ice fields in the west. Since sea ice is one of the main factors to influence processes and elemental cycles in the ocean, it is evident that the region is subjected to extremely high seasonality. Tabular icebergs of several hundred metres in thickness occur, following the circulation of the gyre.

In this frosty region in the far south, the seawater closest to the sea surface gets as cold as it can in winter, reaching freezing point at about -1.9°C. At the same time, the excess salt left over from extensive sea-ice formation is released into the cold seawater that stays behind. In some areas, dubbed coastal polynyas (open water within the ice coverage), this process occurs at a very high rate, producing extremely dense seawater, among the densest on Earth. The dense water is transformed (by mixing with other local waters) into a water mass called Antarctic Bottom Water, filling the deepest parts of the Weddell Sea that may reach depths of over 5,000 metres. The formation process involves surface waters and thus all the chemical and biological species present, and dissolved gases in this surface water are transferred into the Antarctic Bottom Water. This bottom water therefore contains abundant oxygen and CO2 (including anthropogenic CO2). These processes occur predominantly in winter, making it hard to observe them in this inaccessible region (Vernet et al., 2019).

Connectivity with other oceans

The Weddell Sea is not just a remote corner of the oceanic realm, where nothing worthwhile happens. Instead, it is one of the world’s major drivers of processes and chemical cycles in all oceans, and highly relevant to the global climate. The locally-produced Antarctic Bottom Water leaves the Weddell region towards the north, replenishing the layers of bottom and deep water in all the major oceans. This means that, in many places in the oceans, the water close to the sea floor is derived (at least in part) from this relatively small region, the Weddell Sea. By way of the Antarctic Bottom Water, the Weddell Sea (and some other maritime regions around Antarctica) therefore ventilate the abyssal oceans (i.e. supply oxygen), but also transfer (anthropogenic) CO2, nutrients and other chemicals. The Weddell Gyre itself is influenced by remote atmospheric conditions and climate modes. For example, the Southern Annular Mode, a belt of westerly winds moving north and south and a major climate driver, appears to enhance upwelling of deeper water into the surface layer. Also, the El Niño phenomenon in the equatorial Pacific seems to exert remote control on the Weddell Gyre, with a spin-up of the gyre transport, followed by a weakening of the transport.

Changes in the Weddell Region

Although its relative inaccessibility means that the Weddell Sea is undersampled compared to other oceanic regions, we do have some data that is suitable for analysing decadal trends in physical and chemical variables and parameters. We need to continue these observations of the changing sea before imminent changes accelerate in the near or further future. We know, for example, that the very dense bottom waters of the region are becoming warmer and decreasing in surface area. At the same time, ventilation of the waters formed in the Weddell Sea is decreasing, meaning that less oxygen is transferred into the other oceans. The atmospheric forcing in the southern hemisphere is also changing, partly due to the ozone hole, and this has an impact on the Weddell Gyre, with more upwelling of deep water into the surface layer, where the nutrient and CO2 concentrations increase.

Because of the uptake of man-made CO2, the local ocean is becoming more acidic, which may have a detrimental influence on the ecosystem. As to the biology of the region, the abundance of Antarctic krill is decreasing, whereas its competitor, salps, is expanding its territory to the south. Finally, changes in the ice coverage have been observed by satellite observations, though quite different from those taking place in the Arctic. The changes in ice cover will feedback on many other processes and cycles, such as albedo and heat exchanges, gas exchange between the ocean and the atmosphere, and the ecosystem, which is closely intertwined with the water and the ice.

Traditional observations from ships are still the backbone of our knowledge and should continue. They are arduous and expensive, but necessary. However, our lack of knowledge of wintertime processes will hardly be addressed in this way as ships do not often visit the region in the winter. New methods for observation are however being developed, such as biogeochemical Argo floats, which float around the gyre at a depth of about 1,000m and measure vertical profiles of temperature, salinity, oxygen, nitrate and other parameters every ten days, and transfer the data to a satellite. Software is now available that lets the floats stay under the ice and only send their data if there is water above them. Seals are also being used as platforms for instruments, and generally stay in the region all year.

Temperature and salinity data are also collected and transmitted by satellite to the lab. For whale and other mammal research in the Weddell Sea, passive hydro-acoustic instruments are used, which provide information on the abundance and routes of these animals. These instruments can be moored and therefore present all year. Finally, the use of Autonomous Underwater Vehicles (AUV) has recently become more common. AUVs enable a suite of measurements to be carried out in sea areas that are inaccessible to ships, such as under the ice shelves of the Weddell Sea.

Particularly valuable datasets can be collected using stationary moorings that collect data and samples for one or two years, overcoming the limited seasonality of ship-based measurements (Figure 3). However, these moorings still need to be collected to read out the data, collect samples and service the equipment. As some of the important climate cycles driven by the Southern Ocean are decadal, long-term commitment is essential if we want to obtain reliable observations of a changing ocean. For the Arctic Ocean, a network of state-of-the-art observatories called FRAM has been installed by the German Helmholtz foundation. This type of coordinated observations would be particularly helpful for polar systems like the Weddell Sea.

Research in the remote Antarctic is international, with strong cooperation among many countries and institutes. Reliable and robust technology is key to the observation of the changing Weddell Sea, an important region for the Earth’s climate. Deploying instruments and producing regular time series requires a considerable commitment from universities and research institutions. However, if we want to keep track of the effects of climate change in such dynamic regions with an impact far beyond their own boundaries, continuous observations must be made a priority. 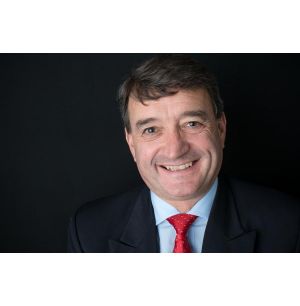