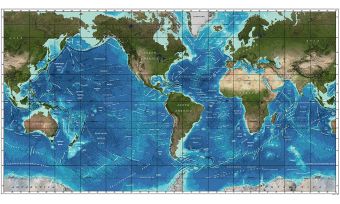 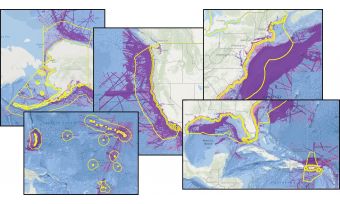 Despite countless days of surveying at sea, we have still mapped less than 20 percent of the world’s oceans. It is time to get organised, according to Rear Adm Shepard M. Smith, director of NOAA’s Office of Coast Survey and the US national representative to the International Hydrographic Organization (IHO). With his paper titled 'Seabed 2030: A plan for high-resolution maps of the ocean by 2030', he will be opening the Hydrography, Geophysics & Geotechnics track of the conference at Oceanology International 2018 on 13 March at London’s ExCel. Read on for a preview of his presentation.

Many people like me start speeches about mapping the ocean with “We know more about the surface of Mars than we do about the bottom of our ocean". And despite years of speeches and countless days at sea surveying, we still have mapped less than 20 percent of the world’s oceans. Even in the relatively wealthy United States, only 30 percent of our waters are mapped. It is time to get organised.

In June 2017, the Nippon Foundation announced the launch of a global mapping initiative that is capturing the enthusiasm of Hydrographic Offices and collaborating partners around the world. A joint project with the General Bathymetric Chart of the Oceans (GEBCO) Guiding Committee, Seabed 2030, presents us with a unifying goal -- to produce a complete, high-resolution bathymetric map of the world’s seabed from the coasts to the deepest trenches by the year 2030. The whys and hows speak to the compelling need for bathymetric data and the potential for innovative ideas and technological advances to accomplish this goal.  From my perspective as the US National Hydrographer and director of NOAA’s Office of Coast Survey, Seabed 2030 is an excellent opportunity to reinvigorate and communicate ocean mapping efforts in common cause with other maritime nations.

To facilitate the objectives above, the Nippon Foundation and GEBCO have established a Global Data Assembly Coordination Center and four Regional Data Assembly Coordination Centres (Figure 1). These centres are responsible for championing regional mapping activities as well as assembling and compiling the cleaned data into a regional bathymetric grid. They will also ensure that the data meets international standards for metadata and the use requirements for data integration and gap analysis. Most importantly, the centres will work to foster collaboration and avoid duplication so that we use our limited global mapping resources most efficiently.

While Seabed 2030 is a new effort, it builds on longstanding programmes having the same purpose.  GEBCO itself was founded over 100 years ago to compile and distribute a map of the global ocean (Figure 2). Since 1988, the International Hydrographic Organisation and NOAA have supported the Data Centre for Digital Bathymetry, to steward the world’s collection of digital bathymetry.

This organisational framework positions us well to move forward, but why is it important to survey and map our oceans at all? Why do we need a Seabed 2030 initiative? As hydrographers, we know intrinsically that more comprehensive bathymetric data has inestimable value. We know that seabed mapping is fundamental to the safety, security, heritage and economic prosperity of our nations. We know that bathymetry is a factor in almost every activity that takes place in, on, near, or under the sea. We know that ocean mapping is the blueprint for forecasting weather, tsunami and storm surge events, climate change projections and the outlines of where living marine resources exist. We know that hydrographic surveying is the means to uncover the history of our fallen lost at sea and the framework for seabed mineral discovery. We know that accurate ocean depths are instrumental in connecting the world through safe navigation and transoceanic communication cables, and we know they are critical to emergency response on the high seas.

But because people understand the role that bathymetric data plays in their lives to differing degrees around the world – if at all – it is incumbent upon us to communicate better the importance of ocean mapping.  Seabed 2030 gives us the opportunity to explain to the public and our policy-makers that unmapped and poorly mapped oceans mean that submarines crash into seamounts, like the USS San Francisco did in 2005. It means that discrepancies between estimated and observed tsunami waves exist potentially creating loss of life and property or unnecessary costly evacuations that can total in the tens of millions of dollars. It means that the remains of those lost at sea and the vessels – or aircraft – containing them may never be found. It means that billions of dollars of offshore wind capacity, fossil fuels and deep-sea mining cannot be exploited, and the ecosystems that may be affected by these activities cannot be protected because they are currently unknown.

At NOAA, we are committed to supporting Seabed 2030 goals with the resources and partnerships available to us. Seafloor mapping is integral to many NOAA products, from nautical charts and accurate assessments of fish and their habitats so vital to our nation’s commerce. We use it to model inputs that enable better weather forecasts and climate predictions for agriculture, transportation and insurance industry decisions, for earlier warnings of costly natural disasters, and for a greater understanding of how our oceans drive life as we know it on Earth. Knowing the depth of the seafloor is not only vital to navigation and coastal management, but is also a fundamental parameter for understanding ocean circulation and tides, wave action, sediment transport, subsea dynamic processes, environmental change, underwater hazards, pipeline routing, and for ground-truthing research and commercial satellite observations.

There are countless other reasons to map the seafloor. The oceans cover seventy percent of the Earth’s surface, yet more than eighty percent of our oceans are unmapped, unobserved, and unexplored. Only about 10% have been mapped using modern technology.  Another approximately 5% were mapped using lead lines and explosives, which provides only a general sense of the area. The global maps of the seafloor that look comprehensive on Google Earth and other projections are actually only capable of resolving features larger than five kilometers, and are frequently hundreds or even thousands of metres in error. That means entire seamounts, channels, and other geologic structures, their corresponding ecosystems, and potential resources go undiscovered for most of the Earth. Our understanding of ocean and seafloor depths and processes is quite limited due to cost, distance and time; we have given little priority to what we cannot see beneath the water’s surface. While we have indeed mapped the entire moon to 7-metre resolution and Mars to 20 metres, much of our own planet’s seafloor is mapped at best to 5000-metre resolution using satellites that infer depth based on gravity anomalies.

With thanks to the Nippon Foundation and GEBCO for their leadership, Seabed 2030 is a timely call to surveyors and mappers to take action. I am pleased that US federal mapping agencies are on board, as are the Hydrographic Offices of other nations, the International Hydrographic Organisation, the Intergovernmental Oceanographic Commission, numerous academic institutions, and industry partners.  NOAA’s preliminary data gap assessment shows that there is significant work to be done in the US EEZ (Figure 3).

Seabed 2030 enables us to bring together hydrographic experts with practical at-sea surveying experience, skilled data processors, database managers, software and hardware developers on the leading edge of technology, geologists, geophysicists, other ocean scientists, mariners and marine planners. Everyone on the ocean can play a role in building and benefit from access to a global seabed map, which has the potential to unlock information to revolutionise business practices, scientific inquiry, and general exploration.  If we communicate it well, Seabed 2030 will catalyse ocean mapping coordination and collaboration, empowering the world to make informed policy decisions, use the ocean sustainably, and undertake scientific research systematically with detailed bathymetric information of the Earth’s seafloor in hand.

Rear Adm. Shepard M. Smith is director of NOAA’s Office of Coast Survey and the US national representative to the International Hydrographic Organization (IHO). In 2017, he was elected as the chair of the IHO Council. He is opening the Hydrography, Geophysics & Geotechnics Conference at Oceanology International 2018 on 13 March at London’s ExCel, with his paper titled Seabed 2030: A Plan for high-resolution maps of the ocean by 2030. Attendance to both the conference and exhibition is free. Register at http://www.oceanologyinternational.com/register