Its connection with the 3rd Barcelona World Race 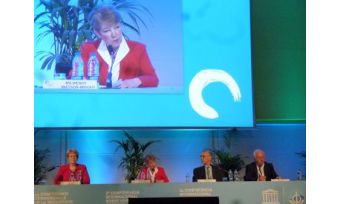 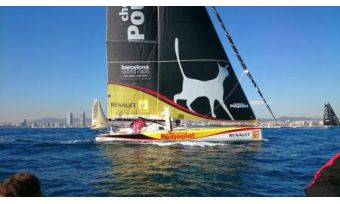 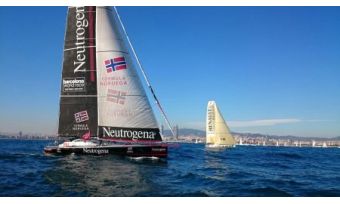 Nine years after the first Conference, the Intergovernmental Oceanographic Commission (IOC) of the UNESCO and The Oceanographic Society (TOS) organised a second conference from 17-21 November 2014 in Barcelona, Spain, to review progress made in ocean science in the last twenty years and to plan ahead.

The choice for Barcelona was supported by the Oceanic Navigation Foundation (FNOB), an institution based at the headquarters of the El Far Consortium of Barcelona. This support was essential for the success of the Conference.

An ice-breaker reception was offered by the Mayor of Barcelona in the historical City Hall, welcoming scientists from 75 countries. Another social event was the reception in the renovated Maritime Museum.

The opening session was chaired by Dr. Wendy Watson Wright, executive secretary of IOC, with the participation of Jane Lubchenko, former NOAA administrator now professor of the Oregon State University. Dr. Lubchenko mentioned Goal 14, which has been inserted into the proposed 17 goals to be submitted to the UN General assembly as follow-on of RIO+20.

The text of Goal 14 is: Conserve and sustainably use the oceans, seas and marine resources for sustainable development.

Many other scientists participated in panels and discussions. The majority of the discussions dealt with physical and biological oceanography. The use of the gliders to fill the gap due to the lack of ships available for the oceanographic research was explained. The conference organisers were able to ensure the presence of Spanish research vessels in the port of Barcelona. Ramón Margalef and Francisco De P Navarro, both operated by the 100-year-old Instituto Español de Oceanografía (Spanish Institute of Oceanography) and the Oceanographic Catamaran of SOCIB, operated by the Balearic Institute of Oceanography. Next to the three oceanographic ships was moored a prototype of the IMOCA 60 class yacht. These boats participated in the 3rd Barcelona World Race (BWR), which departed on 31 December 2014. The race is organised and controlled by the Oceanic Navigation Foundation of Barcelona (FNOB).

Almost all the attendees were able to visit the ships and were warmly welcomed on board by the captains and the crews.

During the panel sessions, ample attention was given to the gliders’ operation. Of particular interest was the news that the two crews of the IMOCA 60 sailing boats would make oceanographic measurements while underway and each boat has deployed oceanographic buoys of the Argo Project in selected ocean areas, ensuring a strong link between the sailing sport and oceanographic research, which is an example to be followed.

The link with oceanographic vessels and sailing helped make the second International Ocean Research Conference particularly interesting. The executive secretary of the IOC (Ms Wendy Watson Wright), the director of the Oceanic Navigation Foundation (Mr. Andor Serra Merkens) and the chairs of the panels were key to making the conference a success. The Barcelona Municipality again proved its continuing support to maritime and scientific initiatives.

The use of vessels of opportunity reflected the policy of compensating the lack of specialised vessels by using other crafts that have sufficiently trained people able to participate in the sea research. This is reminiscent of the concept of crowdsourcing data as proposed and debated during the V Extraordinary Hydrographic Conference (October 2014). The data gathered by the eight IMOCA 60 boats participating in the BWR include salinity, surface temperature, micro-plastic and oxygen, which will be fed into the GLOSS system.

The winner of the race is expected to arrive in Barcelona at the end of March 2015. Readers can follow the race on the website of the Barcelona World Race (website 1).