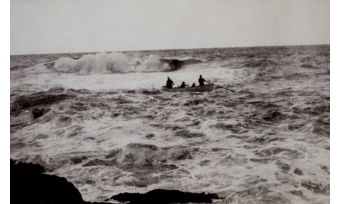 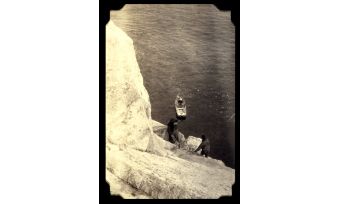 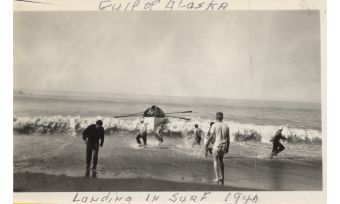 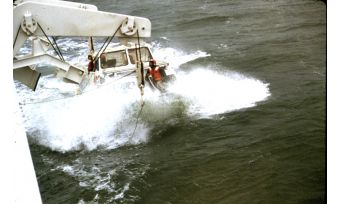 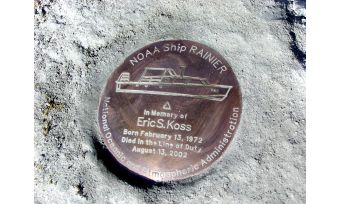 The ability to conduct inshore hydrographic surveys has always been dependent on small boats and the seamanship of those conducting the surveys. Besides the obvious use of small boats for the acquisition of soundings and their accompanying positions, it was not so long ago that many surveys of remote and open coastlines also had to transport topographic and geodetic survey crews to shore camps or daily work areas. Although the nature of both shore work and hydrographic work has changed somewhat over the years, small boat work with its attendant dangers has remained a constant.

Before the days of radio communications, mechanical propulsion systems, radar and electronic navigation systems, the surveyors were dependent only on their seamanship to make their way safely to and from their ships. For propulsion, they had only their skill with oars and sometimes sails. And sometimes, even when in sight of the ship or shore, disaster could strike. When out of sight of the ship, the surveyors were on their own. Although hydrographers experienced many halcyon days of gentle seas and glorious weather, as little as twenty to thirty years ago hydrographers had little knowledge of what the afternoon weather or seas would be when putting the boats over from a mother ship in the early morning. Unpredictable weather and seas, unknown and hidden dangers to navigation, and sometimes hostile natives all combined to make the work of the hydrographer dangerous and sometimes deadly.

The hydrographers of all nations engaged in charting have experienced the danger of the work. Although Spanish, Portuguese and Dutch hydrographers pioneered the early sea routes, few accounts can be found of their early work, particularly as related to small boat work. Curiously, two of the earlier accounts of the dangers of small boat work occurred within a few hundred miles of each other on the coast of Alaska.

Vitus Bering, who sailed through Bering Strait but missed seeing the Alaskan coast in 1728, embarked on a northern Pacific voyage in search of the American continent in 1741 with two ships, the St. Peter and the St. Paul. The ships separated in poor weather and Bering’s second in command, Alexei Chirikov on the St. Paul, actually made landfall one day earlier than Bering on 15 July 1741. Chirikov’s landfall was on what was probably Prince of Wales Island in today’s southeast Alaska, while Bering made landfall on 16 July in the vicinity of Mt. St Elias, over 400 miles to the northwest. For three days Chirikov proceeded to the north looking for a harbour. Apparently he was far offshore as there are numerous openings that he could have entered. Instead, on July 18, he finally spied what he thought would be a safe harbour and sent a boat crew with eleven men to sound it out and attempt to make contact with the natives. The boat did not return and poor weather set in for a number of days before Chirikov could send in a second boat with four men to investigate. This boat did not return either – seemingly both disappeared into thin air. Chirikov had no choice but to abandon his men to their fate as he had no other boats. This first European attempt to sound out a harbour on the coast of northwest America netted fifteen men lost. Whether they were victimised by weather, seas, or native Americans remains a mystery.

Forty-five years later, the French explorer Jean François de Galaup, comte de Lapérouse, embarked on a scientific circumnavigation of the earth, only to vanish with his ships somewhere north of Australia. Before meeting this end, he had investigated the Alaskan coastline earlier and discovered a bay that he called Port des Francais (today called Lituya Bay) in July 1786. He brought his ship through the narrow entrance on July 3 and commenced surveying the bay. He erected a small observatory on the central island of the bay for observing latitude and longitude as well. By the 13th the survey was nearly finished except a few remaining soundings to finish the work at the entrance of the bay. Three boats were sent out. Initially one boat was swamped and overturned in the breaker line. A second boat that went to the rescue was also overturned. The third boat, fearing a similar fate, watched helplessly and then returned to the ship with the sad news. In total, twenty-one men had lost their lives on the bar of Lituya Bay. The next two weeks were spent in fruitlessly searching for bodies. The remaining crew also erected a cenotaph on the central island and named the island Cenotaph Island, a name that has survived up to the present. Like the boat crews that had been swept away earlier, the memorial was swept away by the Lituya Bay mega-tsunami of 9 July 1958, a wave that swept trees off the surrounding mountains over 500 metres above the surface of the bay.

By the early 1800s, the British Admiralty’s Hydrographic Office had embarked on an ambitious programme of surveying the coastlines of the world. In this they largely succeeded, however, sometimes at the cost of surveyor’s lives. Half a world away from the early Alaskan disasters, Matthew Flinders embarked on his great Australian surveys on the first HMS  Investigator. Leaving England in July 1801, the Investigator proceeded to Australia via the Cape of Good Hope. On 6 December, Flinders made landfall at Cape Leeuwin and then conducted a running survey along Australia’s south coast. Two months later he had arrived off the western entrance to Spencer Gulf. Here he sent a cutter ashore in search of water with his good friend and shipmate since 1794, Mr. Thistle, and seven other crewmen. Their boat was spied leaving the beach at dusk but never returned to the ship. A second boat was sent out to investigate and reported dangerous tide rips and overfalls in the vicinity of where Thistle’s boat had last been seen. The following day, remains of the boat were found but traces of its crew were never found. Flinders commemorated these men by naming Cape Catastrophe, Memory Cove, and eight small islands for each of the men who lost their lives - Thistle, Taylor, Smith, Lewis, Grindal, Little, Hopkins and Williams.

Nearly 180 degrees of longitude from Cape Catastrophe lies Cape Horn and the Straits of Magellan. The British Hydrographic Office began surveying these straits in 1826 under Captain Philip Gidley King on HMS Adventure with the tender HMS Beagle under Captain Pringle Stokes. These ships and their crews encountered extreme weather during these surveys with the attendant dangers to both ships and boat crews. The dangerous nature of their survey work was noted in The Admiralty Chart by Admiral George Ritchie: “The extreme foulness of the weather was brought home to the Adventure when, only a month after operations began, Lieutenant Ainsworth was lost with two of his crew when high winds overtook him in the gig whilst crossing the Strait to Port Famine.” The rigors of this survey were such that they caused Captain Stokes to commit suicide by shooting himself. He died in a delirium after twelve days , imagining that the Beagle was driving on a lee shore for the last and fatal time. Lieutenant Skyring temporarily took command of the Beagle before being relieved by Captain Robert Fitzwilliam Fitzroy – commanding officer of the Beagle during the famous cruise of Charles Darwin. Fitzroy also committed suicide, but nearly 40 years later by slitting his throat with a straight razor.

Although weather and waves killed many hydrographers, by far the largest number of fatalities occurred during the survey of 30,000 miles of African coast by Captain W. F. Owen on the Leven and the follow-on surveys. This survey is of near legendary status in the annals of British hydrography. These fatalities were almost always the result of disease as compared to boat accidents. It was nearly a death sentence for detached survey crews to be left ashore or sent up tropical rivers. A hydrographic party left in an accompanying tender called the Cockburn lost 13 of 20 men in 1823 when left at a shore camp at Delagoa Bay. Captain John Washington, a future head of the Hydrographic Office, wrote in 1838: “This gigantic survey, embracing the east and west coast of Africa, from the Isthmus of Suez round by the Cape of Good Hope to the Pillars of Hercules, may be said to have been drawn and coloured with drops of blood. Twice did Captain Owen change his whole crew and officers; those accomplished surveyors, Captain Boteler and Skyring, fell a sacrifice during its progress, and now, in the hour of conclusion, the crews of the Etna and Raven have all but shared their fate.”

Returning to North America, the United States Coast Survey was not immune to the dangers of small boat work. Coast surveyors drowned in small boat accidents in the Kennebec River, Maine; Apalachicola Bay, Florida; Mobile Bay, Alabama; San Luis Pass, Texas; Tillamook River Bar, Oregon; Columbia River, Oregon; Jo Creek, Washington; numerous points on the Alaska coast; and numerous points in the Philippine Islands. Perhaps the most poignant of these was the occurrence at Apalachicola when two officers and four seamen were returning to the Coast Survey schooner Silliman from Sunday church services. They were under sail when a sudden gust of wind overturned the small boat. All six men drowned. Although Alexander Dallas Bache, the second superintendent of the Coast Survey, was eulogising three young men who died in the line of duty in 1852, the following is true of many of the surveyors noted in this article: "These officers have left little to their families but the inheritance of a good name."

The addition of engines and outboard motors, although mitigating the loss of life in small boat accidents, did not entirely end fatal accidents. On 26 September 1936, Lt. Marshall Reese and Quartermaster Max McLees left a shore camp on Unimak Island in a dory with an outboard motor to obtain supplies and communicate with the ship. The men remaining in camp, helpless to assist, saw the dory capsize and drift out to sea with the two men clinging to it. Two of the remaining men hiked to Dutch Harbour and notified the Coast Guard which immediately put to sea. However, a terrific gale had been sweeping the area and the remains of Reese and McLees were never found. The most recent fatal boat accident in the United States Coast Survey occurred on 13 August 2002, when Eric Koss, coxswain of a survey launch off the NOAA Ship Rainier, lost his life off Elrington Island. He, like many of those hydrographers worldwide who lost their lives in the line of duty, is commemorated by naming a coastal feature in his honour. Koss Cove joins the names imparted by Flinders on the Australian coast, those given by Owen on the African coast, and those given by other hydrographers on the coasts of the world in commemorating their fallen comrades.