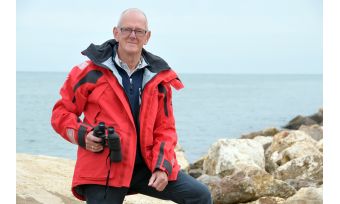 Some weeks ago, I was in southern Portugal where I visited Cabo São Vicente, a headland in the Algarve and also the south-westernmost point of Portugal and of mainland Europe. There is a lighthouse, a restaurant and a shop where you can buy a souvenir to remind you of your visit to this remarkable point on the rocks, high above the waves of the Atlantic Ocean.

While I was standing there, I looked at the horizon and thought about the seafarers in the old days who set sail, without knowing if they would ever return to their homes and families. Some of the crew members were even afraid they would fall off the Earth because they didn’t believe it was round.

In Sagres, a few miles to the east, you can visit the remains of the castle of Henry the Navigator. This Portuguese prince, who lived from 1394 until 1460, was a central figure in the early days of the Portuguese Empire. In 15th-century Europe, he was the driving force behind maritime discoveries and expansion. Through his administrative direction, he is regarded as the main initiator of what came to be known as the Age of Discovery.

Henry is regarded as the patron of Portuguese exploration and he was responsible for its early development and that of maritime trade with other continents through the systematic discovery of Western Africa, the islands of the Atlantic Ocean, and the search for new shipping routes. Although Henry was the initiator of many expeditions, he didn’t take part in any himself.

In those bygone days, seafarers explored many, until then unknown, coasts, and they saw people, animals, trees, and landscapes they had never seen before. Now, more than five centuries later, a lot has changed for the modern explorer in the fields of safety and maneuverability of ships, the aids to navigation, the equipment used and the communication facilities.

In our present-day world, things are developing rapidly. Due to climate change and the melting ice, we are having to chart safe routes through Arctic waters, rising sea levels are changing coastlines and 70% of the world’s oceans still need to be mapped.

I mused about all this while standing on the rocks, watching the sun disappearing behind the horizon, and listening to the roaring waves. More than five hundred years later, there is still so much we don’t know.