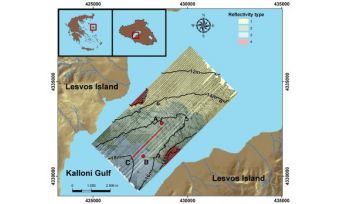 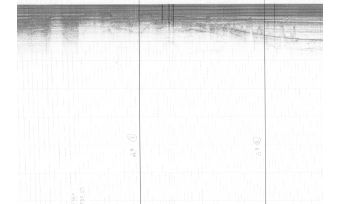 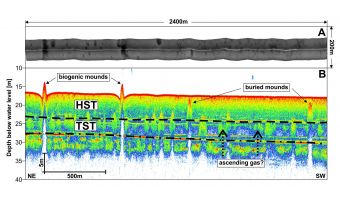 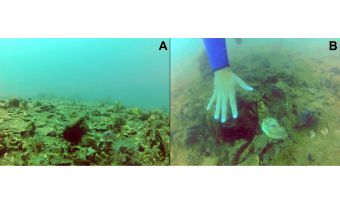 Here we present the winning project of an industry-supported student research campaign, initiated in 2013 by Innomar Technologie GmbH, Germany. More than 25 European scientific institutions participated with research proposals from Master and PhD students in order to perform a hydrographic and geophysical survey with a combined parametric sub-bottom profiler and side-scan sonar system. Complete survey equipment and on-site training was granted to the University of Wien, Austria, the University of Oxford, UK and the University of the Aegean, Greece.

The Kalloni Gulf is a large (20km long) and shallow (<20m deep) semi-enclosed embayment, on the western side of Lesvos island in the NE Aegean Sea that communicates with the open sea through a narrow strait (Figure 1). Previous sparse single-beam bathymetric studies have shown the presence of randomly distributed mounds, up to 4.0m in height relative to the surrounding seabed. An old analogue seismic section from a 3.5kHz Pinger (Figure 2) indicated gas-charged sediments along the gulf. Seabed sampling has revealed that the mounds consist mainly of molluscs of various sizes and they correlate well with some of the most productive scallop fishing locations in the gulf. The purpose of this study is to detect the surficial distribution of the mounds at the central part of Kalloni Gulf, to investigate their morphology and shallow sub-bottom structure and to determine parameters that may have affected their formation. Another scientific question is the occurrence of any preferential orientation or distribution of the mounds in relation to tectonic lines, which would indicate a tectonic influence on their formation.

The study detected the mounded morphology of benthic ­assemblages.

A combined 2D seismic reflection-bathymetric survey and side-scan sonar mapping with Innomar’s parametric sub-bottom profiler system SES-2000 light plus was performed in May 2013. The sonar system was mounted over the side onto the R/V Amfitriti together with a dual antenna DGPS system for positioning and true heading and a motion sensor for heave/roll/pitch data. The simultaneous acquisition of bathymetry, sub-bottom and side-scan data with a single pole mounted device eliminates the need for any offset or layback corrections of the individual sensor positions and has operational advantages compared to any tow fish deployment, particularly in shallow waters with the presence of elevated surface features, several metres high. The narrow beam (<4 degrees) parametric system provides a high-frequency (100kHz) channel for bathymetric data and a low frequency channel with a similar beam width for sub-bottom data. A low frequency of 6kHz was used throughout the survey. The parametric system does not show any signal ringing during transmission and can therefore be operated in very shallow waters and provided a high layer to layer resolution of ca 15cm for the frequency used. The system integrated side-scan sonar was operated at 400kHz and 250kHz simultaneously. Survey lines were acquired along the gulf axis with 80m line spacing at a survey speed of about 4 knots. Some cross lines were also recorded. Ground-truthing of the geophysical data was performed with (i) scuba diving over mounded structures at two sites and (ii) few still video camera and grab drops for benthic analysis at selected locations (Figure 1). The survey covered about 33 square kilometres and a geo-referenced mosaic was produced from the side-scan sonar data during post-processing. The ArcGIS software package was used to merge the digitised bathymetry, the side-scan sonar mosaic and individual seabed and sub-seabed features for interpretation.

From the bathymetric and side-scan data four different types of acoustic backscatter (reflectivity) were identified (Figure 1). Type 1 occupies the northeastern and shallowest part (<14m depth) and corresponds to an area populated by low relief hummocks (average height of 1m). The hummocks consist of biogenic assemblages and appear to be individual or locally coalescing. They become progressively smaller and almost vanish shallower than the 10m isobath. Type 2 is found at the central zone of the study site, at depths between 14m and 17m and contains mainly short and long curved streaks of high backscatter. These features correspond to small mounded structures, up to 6m high (average height of 3 – 4m), sloping 4-17 degrees, occurring individual or coalescing with a length of up to 1.3km. Small depressions are often seen around the mounds. The orientation of these structures is almost perpendicular to the gulf axis. Type 3 occupies the southwestern part of the study zone at water depths deeper than 17m. The seabed here is typically flat with a low backscatter acoustic signature due to the presence of fine grained (muddy) sediments. Few randomly distributed mounds are also observed. Type 4 corresponds to two high backscatter bands at each side of the study area, probably consisting of coarser material from neighbouring fan deltas, built by small torrents discharging into the gulf. From the sub-bottom data two main seismic sequences are distinguished (Figure 3). The upper sequence is acoustically semi-transparent and it is divided into two sub-units from both sides of few internal faint reflectors. The lower sequence consists of few semi-prolonged reflectors. The boundary reflector between the two sequences is of high amplitude and most likely represents the basal unconformity due to a drop in the sea level during the Wurm glaciation. The thickness of the surficial seismic sequence changes from ca 7m in the shallow part to ca 12m in the deeper part of the study area. The two sub-units in the upper sequence probably correspond to the Holocene high-stand (HST) and transgressive system tract (TST), respectively. Acoustic anomalies in the upper seismic sequence and enhanced reflectors along the basal unconformity indicate the presence of gas in the sediment pores. The gas probably originates from bacterial degradation of organic matter, but a hydrothermal source is also possible due to the volcanic nature of Lesvos Island. The most interesting features observed in the upper seismic sequence are buried mounds, similar in size, shape, distribution and orientation with the modern mounds occupying the gulf seafloor.

Visual data obtained by divers and camera drops verified the existence of abundant bivalves and other benthic life, covering the mound structures (Figure 4). The flat areas are mainly covered by muddy sediments with few and small biogenic fragments. A remarkable feature that was detected by the divers was the presence of one hole at the crest of each of the two highest mounds, with a diameter of ca 30cm (Figure 4). However, no depth could be obtained.

This study detected the mounded morphology of benthic assemblages, their spatial distribution over the seabed and their peculiar morphology at the central part of the Kalloni Gulf. The side-scan sonar mosaic indicates that biogenic mounds may also be present towards the SW and closer to both gulf sides. The parametric sub-bottom profiler data demonstrates special morphological aspects (height, local composite morphology, neighbouring depressions) but most importantly distinguishes similar buried structures that were initially interpreted to be gas-charged sediments in older poor quality Pinger records. Consequently, the use of modern equipment with high resolution has provided a deeper insight into the morphological and stratigraphic history of the gulf and caused a refinement of the existing interpretation. Most of the buried mounds are located along the TST-HST boundary, suggesting a start of growth during the Late Holocene (~5500 BP) when a small and steady rate of sea level rise occurred. An explanation for the mound structures could be fluctuations of the physical environmental conditions, the initial formation of shallow craters due to fluid escape, the preferentially successive colonisation of benthic life within these craters and finally the build-up of the mounds possibly with a central vent where fluid seepage occasionally occurs. Future work with detailed multibeam morphology, morphometric measurements, core sampling, sediment dating, benthic surveys and fluid measurements is required in order to determine the mode of the mound formation and their possible correlation with tectonic lines with more details.

We would like to thank Innomar Technologie GmbH for granting equipment and technical support, the captain of R/V Amfitriti N. Hatzilias and the diving team M. Sini, L. Herold and A. Pori.

From Vision to Action: The Nippon Foundation-GEBCO Seabed 2030 Project Appeals for Crowdsourced Data