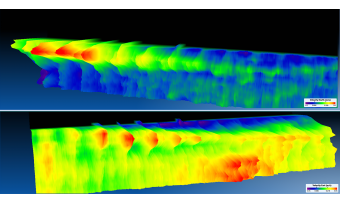 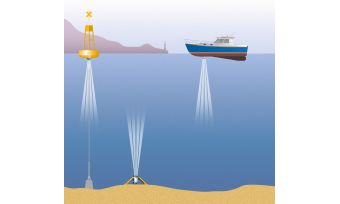 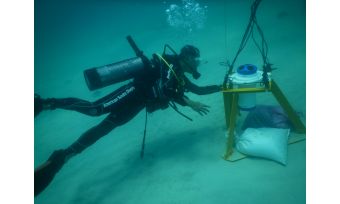 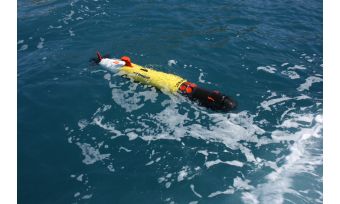 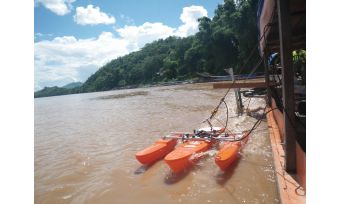 Rather than a spinning propeller, the Acoustic Doppler Current Profiler (ADCP) – just like dolphins and bats – uses sound to explore its environment. Operating underwater, the method works like hand-held radars used by police to catch speeding motorists. This article explains the technique of this frequently used type of instrument and some of its applications.

A sound burst is emitted by the ADCP along beams angled downward. Echoes are returned due to scattering off particles carried by water currents. A second burst can be used to track movement over the seabed. By analysing these sound echoes, the ADCP makes four different measurements at once.

This collective of data types used individually and together permits a single ADCP to make a diverse range of measurements.

First conceived in the mid 1970s, the technology of ADCPs took about a decade to gain traction. Within another decade, it had become widely accepted. It is now used for measuring water currents in oceans, rivers and even pipes.

The ADCP combines two prior views of water in motion. Since the 1960s, exploring time variability of ocean currents required self-recording current meters. Their time series described the history of concurrent motions at a few depths. A complementary fine-scale view came from velocity profilers like Pegasus and Electromagnetic Velocity Profiler. Their datasets provided snapshots of how water currents change through depth at a few times – typically hours apart.

Simply put, ADCPs were a confluence of these two instrumentation streams - current metering and velocity profiling. Each of these techniques provided an inherently 1D view of motion in the ocean - high resolution in time or depth. In contrast, the ADCP offered a 2D view - time and depth. ADCP datasets reveal the time history of water in motion throughout the water column - or at least a good fraction of it. Profiles can be taken just seconds apart and lower frequency devices (75 kHz - 38 kHz) can observe hundreds of metres.  In fact, increased measurement range was the most requested development after the technology had been widely accepted.

Moving waters often carry small particles such as zooplankton or sediments. Sound waves sent through these waters undergo scattering. The resulting echoes carry a change in pitch. This well-known effect is called the Doppler shift. You will recognise it from the change in a wailing siren when it passed.

This change in pitch provides a measure of how fast water currents are moving and in what direction. Sound waves propagate through a water column. Thus echoes are continuously created en route due to encounters with moving particles.

ADCPs send out sound waves along several beams that angle downward. The time series of returning acoustic echoes are analysed within the device. This provides water current velocities at many different depths. Calculating the relevant measurement depth for a segment of the echo record uses the elapsed time since the sound waves' emission. Such a breakdown of the data is a water current profile.

Besides measuring water currents accurately and with high resolution in time and depth, ADCPs have some other compelling advantages. ADCPs can measure currents remotely. Thus they can record all the action while looking down from a ship or a surface buoy or looking up from a subsurface mounting or mooring. In the latter case, the ADCP is safer from loss due to high drag forces in strong currents. Plus there is reduced risk from vandals or collisions by ships.

ADCPs were among the first oceanographic instruments to include significant onboard signal processing.  Combining this with a real-time link resulted in valued time savings for users and timely data for decision making.  Furthermore, ADCPs can provide a more complete view of an underwater situation. They can aid safety, efficiency, reduced risk and better decision making in operational situations, such as on offshore platforms.  To boot, ADCPs do not have any moving parts. This is a bonus for maintenance and for operating in icy waters.

ADCPs introduced the groundbreaking capability of measuring moving water while operating from moving platforms.  These ADCP datasets are 2D spatial transects—along the boat path and through depth. As well as saving survey time for users, this capability enabled unseen views of water in motion. Survey companies could efficiently map horizontal circulation patterns of current systems.  Others captured detailed spatial views of tidal current variation within busy ports and shipping channels.  By now, an impressive range of moving platforms have been used for ADCP survey work including ships, boats, floats, underwater vehicles and towed bodies.

Since 2000, unmanned underwater and surface vehicles have rapidly advanced from experimental prototypes to reliable tools. On many of these vehicles, acoustic Doppler technology has been part of much improved navigation by providing the Doppler Velocity Log.

As well as aiding navigation, these devices can also operate as ADCPs aboard the unmanned vehicles. In other cases, the ADCP itself is carried. Combining the ADCP’s diverse measurements with the flexible operation of the unmanned vehicles can lead to safer and more productive environmental surveys. One example was the use of a REMUS-100 to examine spatial changes in coastal waters during floods. These vehicles are equipped with up and down looking ADCPs to see as much of the water column as possible.

Another innovative vehicle that carries ADCPs is the Wave Glider.  A recent study used the ADCP’s current and echo profiles to examine sediment transport and dredge plumes around shallow sandbanks. Likewise, work has been completed to add ADCPs to Slocum gliders in support of ocean observatories.

Self-contained ADCPs contain internal memory, processing and power supplies. They are used worldwide for observing coastal and deepwater currents. One recent example is a large Chinese research programme titled WPOS - Western Pacific Ocean System. This multi-national effort is studying oceanic changes that link to major meteorological events. Examples include the East Asia summer monsoon and El Niño. WPOS aims to reveal a more complete view of ocean currents in this region, notably the Kuroshio Current and the Indo-Pacific Warm Pool. The findings will be particularly valuable to climate modellers.

More than two dozen moorings, distributed among six arrays, are off the Philippines and Indonesia. The arrays will record ocean currents in water depths to 6,000m. Each mooring includes lower frequency 75kHz ADCPs, as well as higher frequency ADCPs ranging from 150 to 600kHz.

For measuring currents from a moving platform, two different types of measurements need to be combined. The first is the apparent velocity of the water when seen from the moving boat. The second type is the velocity describing the boat’s motion. When the seabed or riverbed is within its acoustic range, the ADCP can make both types of measurements in quick succession. In deeper waters, a GPS system supplies the motion of the surface platform. The ADCP combines these data types internally to compute the actual water velocities, sometimes called speed-over-ground.

An impressive example of using ADCPs on ships is a long-standing programme in the Southern Ocean. Since the late 1990s, research scientists have been using ADCPs on Antarctic supply ships for ocean and climate studies. Transects across Drake Passage are collected several times per month. While the ship is underway, hull-mounted ADCPs measure upper-ocean currents at 30-40 depths. One ADCP measures the upper 300m of the water column whereas a second lower-frequency ADCP profiles to 1000m depth.

ADCP technology enabled accurate river discharge (volume transport) measurements from moving boats - see the video with this article. Later followed stream flow measurements from floats. Early adopters of this new method were the United States Geological Survey. Advantages of the ADCP technology are that it is accurate, safer, samples rapidly and displays discharge results as soon as the river transect is completed. The ADCP profiles reveal how water currents vary with depth and across the river or estuary. By repeating the same sections at later times, operators can see how current distributions are changing across the river and through time.

A great example of the power of ADCP technology for studying rivers is work in the Amazon. Introduced there in the mid-1990s, the new method permitted crossing the river in much less time. Thus wide estuarine sections carrying the largest river discharges in the world were measured accurately (tidal changes during the time-consuming measurement transects had biased earlier methods).  As well, the ADCP’s echo data aided efficient sampling of suspended sediments. Plus the ADCP-based method is safer from collisions with flotsam and produces more complete data sections.

Plans for the road ahead seem paved with ideas that build on the ADCP’s fundamental capabilities.  For three decades, researchers have tried using ADCP echoes for looking at suspended sediments and zooplankton.  And still the push continues.

Some common trends in the industry point to increasing demand for smaller size, improved performance, reduced power consumption and more integrated technologies. More applications of ADCP technology will likely follow when these opportunities are grasped. 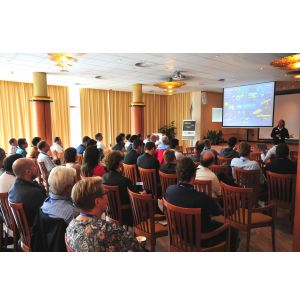 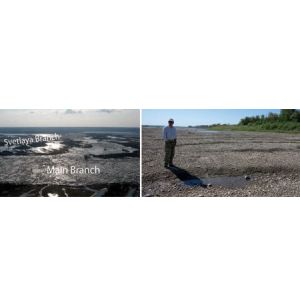 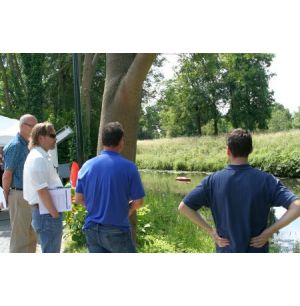 ADCPs in Action in the Netherlands
Latest article