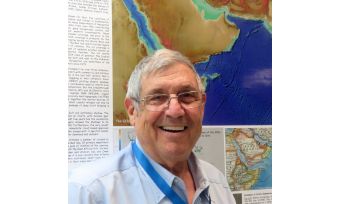 In June 2016, the IHO/IOC GEBCO Guiding Committee and the Nippon Foundation hosted F-FOFM, the Forum for Future Ocean Floor Mapping in Monaco. Over three days, some 170 ocean mapping stakeholders were encouraged to collaborate and complete the mapping of the world’s oceans below the traditional limits of hydrographic surveys (~150m).

FOFM, featured in Newsweek and Economist articles, energised the community by setting a 2030 date for completion of a 100m grid of the oceans. In the year since, a number of advances indicate the possibility of success.

My previous Insider's View (January 2016) proposed using a mother ship with 50 HUGIN AUVs to complete the unmapped 88% of the oceans. While eliciting little response, it coincided with Sea Trepid International's purchase of 6 HUGIN 6000s. Now, together with Ocean Infinity, and under the aegis of Swire Seabed, they will vastly increase the economics of seafloor mapping by using their new mission dedicated vessel Seabed Constructor as the host surface vessel (HSV), controlling six unmanned surface vessels (USVs), each in contact with its own HUGIN 6000. This combination is under contract for the next six years, almost 50% of the time remaining until 2030.

In space, a few of the world's 1,810 billionaires have already set impressive goals for galactic exploration. In light of the far more tangible returns from mapping our oceans, it might be rewarding for another billionaire to fund the work of such a HSV-USV combination. Recently, Ocean Infinity has even acquired two more HUGINs. I frankly consider a grid for the oceans, similar to those existing for our fellow planets, to be nearly on a par with the initial decoding of the human genome.

March's THSOA HYDRO-2017 meeting in Galveston, USA, showcased the standardisation and simplification of multibeam acquisition and analysis and the widespread movement towards autonomous data acquisition by unmanned surface vehicles and UAVs. A strong take-home message was delivered by CCOM's John Hughes-Clark who showed that troublesome outliers on MB swaths result from near surface oceanography and not the equipment. The solution is either a more narrow swath, instantaneous measurements of these effects in the upper layers, or as we are seeing, AUVs operating well below these phenomena.

Another outcome of FOFM has been wholesale release of existing datasets. Examples are the EMODNet, BOEM's Gulf of Mexico grid, the MH370 search area, localised grids like that for the Baltic Sea, and likely future contributions of offshore oil and seabed mineral surveys. However, inshore areas still face the political hurtle of grids as fine as 100m. I for one, have expanded the compilation of our 100m grid for the Red Sea (<i>Hydro International<i> Nov-Dec 2014) to the Persian Gulf and Indian Ocean down to the Equator. This will use all available sources for the shallow offshore of 19 countries comprising ~2% of the Earth and its shallower seas.

The MH370 search showed that the oceans are poorly mapped. An article by GEBCO's Karen Marks and Walter Smith in AGU's monthly Eos, caught the attention of multiple media outlets. emphasising to air travellers that a ditching at sea would probably be in a poorly mapped area.