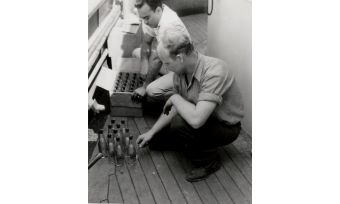 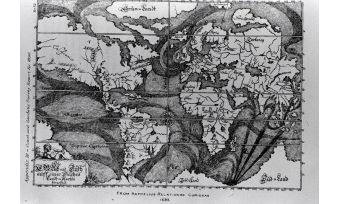 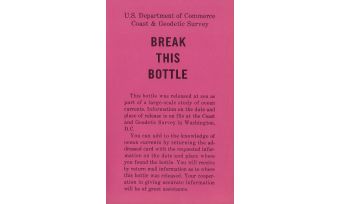 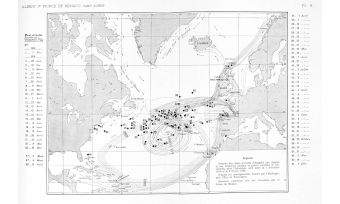 “Although the Currents of the Ocean form a most important part of hydrography, yet it is only since the introduction of chronometers, and of celestial observations for the longitude at sea, (that is, not much more than forty years ago,) that a competent idea of their [currents] direction and force, in any kind of detail, could be obtained.” Thus wrote Major James Rennell in 1820 in the opening lines of his posthumously published (1832) An Investigation of the Currents of the Atlantic Ocean. Although the existence of oceanic currents had been known since the time of Columbus, the inability of navigators to accurately determine their set and drift made it impossible to fully understand or map these great rivers in the sea. A few years after publication of Rennell’s work, the 1843 volume of Nautical Magazine reported that it was suggested that ’message bottles’ be used to study currents as early as 1801 and that at least 119 bottles had been recovered since that time. The message requested that the finder report the location and date of the finding to the British Admiralty. Although ‘messages in a bottle’ had been used for centuries as a means of communication, the systematic use of drifting bottles as a scientific tool capable of multiplying observations appears to have originated with this project.

In 1845, the United States entered the arena of oceanic current studies when the United States Coast Survey embarked on a programme of systematic study of the Gulf Stream. The following year the Coast Survey added the use of drift bottles, possibly inspired by the British work, to its array of observational techniques. The main objective of the Coast Survey was to refine mapping of the Gulf Stream. The success of the experiment after launching the bottles depended upon four main factors: 1)­ knowing location of launch point; 2) someone finding the bottle; 3) a record of its location; and 4) the date that it was discovered. The latter two could provide not only the direction of the ocean current, but also an estimate of its velocity assuming that the bottle was found within a day or two of washing up on a beach somewhere.

The first Coast Survey bottles were tossed into the Gulf Stream from the Coast Survey Brig Washington on 27 July 1846. Eleven months later, one bottle was discovered on the beach near Kerry, Ireland on 27 June 1847. Two British bottles set adrift off the mid-Atlantic coast of the United States in June 1819, had almost identical transit times with one landing on the coast of Ireland and the other in the Azores. Two other bottles from a different group were launched that same year inside the Gulf Stream, but closer to shore. Their journeys were less spectacular, arriving at Nag's Head, North Carolina, in just a few days.

On 8 April 1854, drift bottles were launched from the Coast Survey Steamer Walker at Latitude 28º57' North, Longitude 88º15' West, in the Gulf of Mexico approximately 78 miles southeast from the tip of Louisiana. Two months later on 6 June 1854, a beachcomber found one of these bottles on the eastern shore of Florida. Aside from the location of the discovery, the finder of this bottle added valuable information that indicated he had been through the same area just four days earlier and had not previously seen the bottle. This bottle traveled at least 750 miles in the span of 59 days. While this information seems crude by today's standards, this observation was the first proof of the Loop Current and that waters of the Gulf Stream debouched from the Gulf of Mexico. As a side note, this bottle was thrown overboard only a few miles from the site of the 2010 Deepwater Horizon oil spill disaster. If that oil had discharged on the surface, this drift bottle indicated that it would have probably covered the beaches of the Atlantic coast of Florida.

A bottle thrown from the Coast Survey Schooner Gallatin on 30 October  1854, at Latitude 40º26'30", Longitude 73º50' West, off the coast of New York was discovered on the beach at Santa Cruz, Graciosa Island, Azores, on 13 June  1855. Another bottle that had been released by the Gallatin that same day at Latitude 40º23' North, Longitude 73º53' West, was discovered on the shore of North Caicos Island in the Caribbean on 20 November  1856. This bottle almost completed the circuit of the North Atlantic Gyre.

The use of a ship’s set and drift, drift bottles, and other forms of drifting objects have been used for ocean-wide studies, regional studies and local studies for over two centuries. Initially these studies were used to improve maritime navigation but over the years have evolved to fisheries studies and various physical oceanographic studies. Heavy use of drift bottles for ocean-wide or regional studies was made in the 1950s through about 1970 on projects with acronyms such as the international North Pacific NORPAC project, the regional CalCofi cruises conducted off the California coast by the Scripps Institution of Oceanography and Bureau of Commercial Fisheries, and Bureau of Commercial Fisheries projects in the Gulf of Maine and Georges Bank. Beginning in 2000, Fisheries and Oceans Canada released thousands of drift bottles in the Arctic Ocean and surrounding areas to study currents in the Arctic. Because of the low percentage of drift bottles that are actually recovered, they were usually released in large quantities, sometimes numbering into the thousands.

Supplementing drift bottle programmes, accidental cargo releases from ships, however, have generated valuable information in the past couple of decades. In late May of 1990, the container ship Hansa Carrier encountered a severe storm in the area of Latitude 48º North, Longitude 161º West while traveling between Korea and the United States. Twenty-one containers were swept off the ship by large waves with five of them containing Nike running shoes. Four of the shoe containers were known to have broken open and dispersed more than 60,000 shoes into the Pacific. The following winter more than 1,300 of these shoes were reported to have washed up on the shores of Vancouver Island, Washington, and Oregon.

Less than two years later on 10 January  1992, another container vessel crossing the stormy North Pacific between Hong Kong and Tacoma, Washington, lost a dozen containers at Latitude 44.7º North, Longitude 178º East. At least one container containing an estimated 29,000 small plastic bathtub toys was ripped open as it hit the water. Ten months later an array of blue turtles, yellow ducks, green frogs and red beavers began washing ashore near Sitka, Alaska, providing yet another source of valuable data through accidental circumstances. To this day these bathtub toys are continuing to wash up on the shores all around the earth, including the eastern shore of the United States.

The recovery rate for far offshore releases of drift bottles and accidental cargo losses has proven to be just less than 3 percent. Further inshore, this percentage improves to sometimes over 10 %. The remaining items have either been picked up individually and not reported, or are still out there continuing their wayward drift. Through drifter studies, researchers have learned that ocean surface currents can be chaotically changeable. Two identical items released at the same location and at the same time can end up in vastly different areas. Severe storms that alter normal weather patterns also play an important role in the movement of drift items.

Today, satellite-tracked arrays such as the ARGO profiling drifter floats and the Global Surface Drifter buoys and floats monitor the deep ocean basins for currents, temperature and other parameters. However, many conservation agencies continue to use drift items to track the movements of the ocean for things such as fish egg and larva tracking or to simulate the trajectories of potential catastrophic oil or chemical spills. For certain purposes, the preferred item now used for tracking movements are drift cards. These cards are usually constructed from bio-degradable material, coloured red or orange, and placed in waterproof envelopes. Although early drift cards were made of plastic, the biodegradable material currently used dissolves after a period of time mitigating the possibility of harming marine life or adding more waste material to the oceans. These cards can be dropped in large quantities from aircraft, and it is assumed that the cards have less friction upon the surface of the water than the traditional bottles whose trajectories could be affected by wind. In a way though, the replacement of the drift bottle is sad as many have dreamed of finding a ‘message in a bottle’.