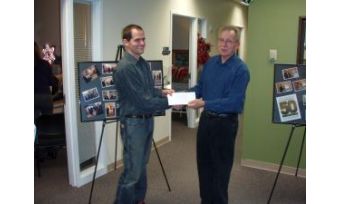 The Hydrographic Society of America (THSOA) has established a scholarship programme for students enrolled in or beginning a degree programme in fields related to hydrography.  Six scholarships totaling USD10,000 for the 2011 - 2012 academic year were recently awarded to students in United States universities, at both undergraduate and graduate levels. In addition to these national scholarships, the Houston, Texas Chapter of THSOA awarded USD5000 in scholarships to Texas students. The THSOA scholarship committee is reviewing applications for the 2012 – 2013 academic year and expects to continue this worthwhile programme with even more scholarship support in the future. THSOA also recently elected a new slate of national officers and trustees. The officers are: Pat Sanders, president; Doug Lockhart, secretary; Harold Orlinsky, treasurer; and Art Kleiner, board of trustees. Chic Ransone, Richard Byrd and John Oswald continued their terms as members of the board of trustees.