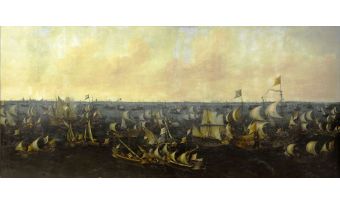 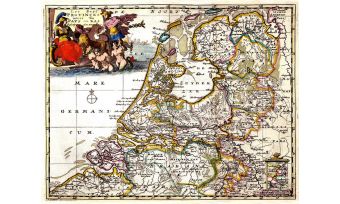 The Netherlands is a maritime nation, evidence of which can still be found in waters throughout the country. Even so, only a small part of these waters has been surveyed, and it is very likely that there are many more shipwrecks, submerged villages and other archaeological finds waiting to be discovered. The former Zuiderzee in particular is considered to be a treasure chest full of maritime heritage.

Underwater archaeological sites are highly vulnerable and can deteriorate quickly under the influence of currents and other factors. The Cultural Heritage Agency of the Netherlands (RCE) has therefore decided to survey a number of water bodies to discover whether archaeological remains can be found. Based on historical sources, the chance of discovery is thought to be very high in the areas selected. Once remains have been found, the identified sites can be examined more closely and possibly protected. One of the selected areas is Hoornse Hop, the site of one of the largest sea battles in Dutch maritime history, which took place on 7-12 October 1573.

The Revolt (1568-1648), better known as the Eighty Years War, started as a protest by a group of Protestant noblemen against the way in which the Catholic Kingdom of Spain controlled its empire, and against the increasing restrictions placed on religious practice. Protestant insurrectionists took control of areas and cities were attacked. King Philip II of Spain could not ignore this and reconquered as many occupied areas and rebellious cities as possible; however, in 1573 he had to call off the siege of Alkmaar and a Sea Beggar squadron blocked the Spanish military supply routes on the Zuiderzee to Groningen and Friesland.

To help the Sea Beggar squadron and to prevent their own cities from being attacked, the cities of Hoorn, Enkhuizen, Edam and Monnickendam formed a fleet to defect the expected attack from Catholic Amsterdam. Despite being outnumbered, they succeeded in defeating the Spanish fleet. The battle took place on the ‘doorstep’ of Hoorn, at the Hoornse Hop. The outcome of the Battle on the Zuiderzee formed a turning point in the war, and led to unprecedented prosperity in West Friesland.

(text continues below the image)

Periplus Archeomare will work together with survey company Deep from Amsterdam to scan the water bottom in the Hoornse Hop in the coming weeks for the RCE. For this, the inspection vessel Loeve, a survey catamaran, will be used. An area of almost 80 square kilometres will be mapped using side-scan sonar, for which the vessel will travel more than 900 kilometres.

High-resolution detailed recordings will then be made of any shipwreck remains that are found, using a multibeam echosounder. The expectation is that at least ten shipwrecks from different periods will be found and mapped. Other items are also expected to come to light, such as submerged dike remains.

The original version of this article was published by the Cultural Heritage Agency. (Nederlandse Rijksdienst voor het Cultureel Erfgoed)