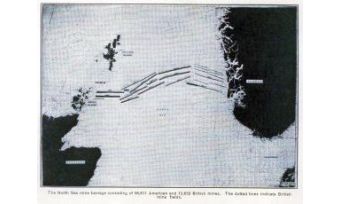 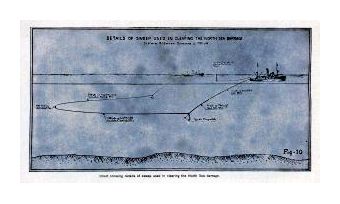 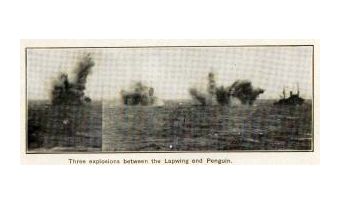 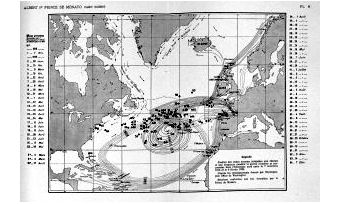 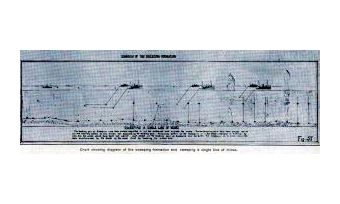 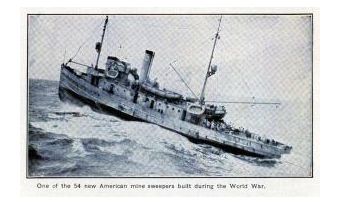 Historically, perhaps the naval discipline most related to the work and skills of the hydrographer is naval mine warfare. Successful implementation requires knowledge of the configuration of the bottom in the area to be mined, local tides and currents, and relatively precise navigation to position mines, identify mine fields, and ultimately remove mines. The laying and subsequent sweeping of the great mine field known as the ‘Northern Barrage’ during World War I is a nearly forgotten story that encompassed cutting edge technology, evolution of hydrographic techniques, and significant courage.

When the United States entered World War I in April 1917, the German U-boat campaign was at its height. In December 1916, Germany began sinking merchant vessels without warning and two months later announced unrestricted submarine warfare. By April, Germany was sinking ships bound for English and French ports at the rate of 800,000 tons per month. If allowed to continue indefinitely, such a rate would potentially starve Great Britain into submission. In May 1917, the United States entered the war. To counter the submarine threat, Great Britain and the United States developed a convoy system that was partially effective in stemming the losses, but they still amounted to 450,000 tons per month. This was an unsustainable loss rate and would ultimately doom the Allied war effort if allowed to continue.

Other anti-submarine measures were also instituted including arming merchant vessels, formation of squadrons of submarine hunters equipped with ‘listening devices’, aerial patrol by seaplanes and blimps armed with depth charges, arming of destroyers and other craft with virtually unlimited supplies of depth charges, and mining of waters habitually traversed by enemy submarines. This last measure is of great interest to hydrographers as the greatest combat mining operation up to that time in history was completed over the next year. With the cessation of hostilities in November 1918, the problem of removing a vast number of mines and opening sea lanes to the ships of the world became of paramount importance.

Early on, the concept of confining German submarines to the North Sea was suggested between the British Admiralty and the United States Navy. This would require either mines, nets, or a combination of mines and nets, extending from Scotland to Norway on the north, the minimal distance being 230 miles, and a mine field extending across the English Channel on the south. The British had already had unsatisfactory experience with nets so it was decided to use only mines for blockading the exits to the Atlantic Ocean from the North Sea.

At the time the decision was made, the United States was developing a firing device for mines that would activate when a submarine was within 100 feet of a mine. This compared to British mines that required contact for activation. The difference was significant as the number of mines required with the American system would be approximately 1/3 that required with the British system to establish a truly effective barrier. It was this difference that made the concept feasible. The decision was made to produce 100,000 American mines with the new firing mechanism although it had never been combat tested. The plan was to have these mines ready for planting by the spring of 1918. To implement this plan separate mine components were assembled by over 500 manufacturing facilities such that no one plant or individual would understand the end product. Additionally, 80,000,000 feet of wire rope and 30,000 tons of anchor material would have to be produced. Besides this industrial effort, a fleet of twenty-four small cargo vessels was dedicated to transporting the mine components from the US to Scotland for final assembly, ten ships were modified for laying the mines, and, looking ahead to peace, a fleet of 34 specially designed minesweepers would have to be built as rapidly as possible starting in July 1917. During the whole operation, only one of the twenty-four cargo vessels transporting mines across the North Atlantic was lost to submarine attack with 41 men lost.

The US mine squadron consisting of two old cruisers and eight converted merchantmen began arriving in Scotland in May 1918. Mines had still to be assembled at the Scottish bases, but by 7 June, 3400 had been assembled and the mine layers proceeded out to lay the first row of mines – 47 miles long with mines at three different levels. Locating the mine fields both prior to laying of mines and during recovery operations was done by laying out buoy arrays that were positioned using taut-wire apparatus for measuring distance from known shore points and sextant observations of celestial bodies for latitude. Taut-wire use for horizontal positioning of mine fields is an example of technology modified and used by hydrographic surveyors following the war. By October 1918, the Northern Barrage, as it came to be called, was finished. Captain Reginald Belknap, the mine squadron commander, recalled: "A barrier of high explosives across the North Sea – 10,000 tons of TNT -, 150 shiploads of it, spread across an area 230 miles long by 25 miles wide and reaching from near the surface to 240 feet below – 70,000 anchored mines each containing 300 pounds of explosive, sensitive to a touch, barring the passage of German submarines between the Orkneys and Norway – this was the final five months’ contribution of the American and British mining forces towards bringing the war to a close."

The sensitive firing device and novel construction of the American mines, the attributes that dictated their use in the barrage, now made sweeping a dangerous proposition at best. Technical problems associated with steel vessels sweeping the field were solved in the winter of 1918-1919 which made it feasible to use the new American minesweepers. In addition, as related by the US Navy history of this operation, "The water was deep, beyond all the customary estimates for mine operations; the winds were strong; the seas were rough; the atmospheric conditions were such as to make vision, for the greater part of the time, difficult if not impossible." The method used to sweep the minefields was wire-drag - a method first used as a hydrographic tool. Initially developed as a drifting rope-sweep by the French hydrographer Joseph Renaud in 1882, modified by engineers of the US Lake Survey for sweeping with a line attached between boats in 1903, and then adopted and further modified by the US Coast and Geodetic Survey in a system that became known as wire-drag, the method consisted of towing a line between two vessels by means of an arrangement of buoys, kites, and weights to maintain a pre-set depth. As practiced in hydrographic surveying, the depth of sweep was set at a level that would allow safe passage of deepest draft shipping assumed to occur in the swept area. Buoys attached to the sweep wire were observed by the sweeping boats and when an obstruction was encountered, the buoys would align in a V-shaped pattern as the sweeping boats proceeded ahead. The apex of the V would indicate the location of the obstruction which would be carefully sounded out for least depth.

To safely sweep the mines of the Northern Barrage, a system was developed where three pairs of sweeping vessels would run down a single line of mines. The first pair would have its sweep set to cut the antennas of the near-surface mines and explode them; the second and third pairs would have their sweeps set such that they would cut mine mooring cables and set adrift any mines not exploded by the first pair. The mines set adrift were detonated by rifle fire from a small vessel (a sub chaser) that followed behind the sweeping vessels. The work was exceedingly dangerous as random mines exploded on a regular basis, often for no apparent reason. Occasionally, the explosion of one mine would activate a second, termed ’countermining’ in the official history. Sometimes these explosions would occur in the vicinity of a sweeping vessel. Mines were also fouled in the sweeping wire and the associated kites causing explosions close aboard while retrieving wire. Damage to minesweepers occurred on a regular basis. A Flower class British minesweeper was sunk by mines with the loss of 40 men while they were sweeping their segment of the barrage. American losses were less severe – less than ten men and only one small vessel sunk during five months of sweeping. However, one sweeper was permanently disabled and another had six months of shipyard repairs following a close explosion.

Results of the Sweeping Effort

After five months of sweeping, between May and September 1919, the American commander on-site declared the sweeping job completed. This operation involved relatively new technologies – a form of wire-drag used by the sweepers from hydrographic technology and taut-wire horizontal distance measurement which passed from the minesweeping community to the hydrographic community following the war. A disturbing statistic is that of the 56,611 mines laid in areas swept by US minesweepers, 4,392 exploded prematurely, and only 21,295 were accounted for during sweeping operations leaving over half unaccounted for. Over the next three years, 64 mines were found in the North Atlantic and plotted on the accompanying map by Prince Albert of Monaco. How many vessels encountered mines in the years following World War I is unknown. A 2009 publication by the United States Navy Program Executive Office Littoral and Mine Warfare and the Expeditionary Warfare Directorate stated that "mine countermeasures vessels participating in … the Kattegat and North Sea find and destroy World War I and II-era mines." Twenty-five years after World War II an estimated 2,000 sensitive influence mines still remained in the Pacific. Given the nature of mine warfare and the state of world politics, it would not be surprising if many of the hydrographers reading this today spend part of their career engaged in some form of mine neutralisation activities be it for an on-going war or clearing shipping lanes after the cessation of warfare. As a final note, by various counts between four and thirteen U-boats were sunk by the barrage, a factor contributing to the end of the World War I. 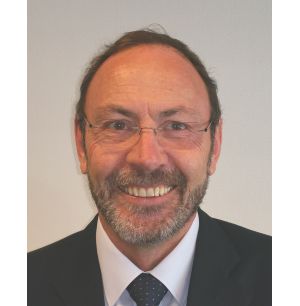