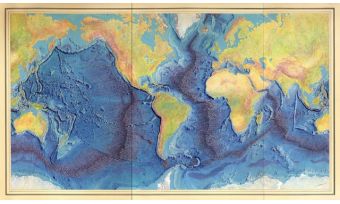 More than 70% of the Earth is made up of oceans, yet the underwater domain is the least known area of our planet. Even now, in the technologically advanced 21st century, only an estimated 10% of the ocean floor has been mapped in detail. There is still much to be discovered.

The average depth of the world’s oceans is more than 3,600m. The deepest areas are found in oceanic trenches such as the Mariana Trench, which is located in the western Pacific Ocean, about 200km east of the Mariana Islands. At nearly 11,000m below the surface, it is believed to be the deepest point on Earth.

At the other extreme is Mount Everest. Technically speaking, it is the highest point on Earth, reaching 8,848m above sea level, but if you start measuring from the seafloor there are some much higher mountains. Mauna Loa in Hawaii, stretching 9,170m above the seafloor, is probably the highest, even though only 4,170m of it can be seen above the surface.

Mount Everest and the Mariana Trench

You could submerge Mount Everest in the Mariana Trench and still also have space for Mount Washington, which at 1,917m is the highest peak in the northeastern USA, or Tongariro, a compound volcano in the Taupo Volcanic Zone of the North Island of New Zealand. Alternatively, stacked end to end, you could fit 13 times the Burj al Khalifa – the world’s tallest building – in the trench.

Bear in mind that it’s only a century ago that Marie Tharp made major strides in discovering more about the world’s oceans and started mapping the entire ocean floor. Despite the barriers of being a female scientist in the early 20th-century’s male-dominated scientific community, Tharp’s work led to revolutionary discoveries and the relevance of her maps of the ocean can still be felt today.

Deepest Points of Our Planet

Step by step, scientists and researchers are revealing more secrets of the deepest points on our planet. But nearly 100 years after Tharp drew her maps of the seabed, more than 90% of the world’s oceans still remain unmapped. We probably know more about the universe and the dark side of the moon than we know about the deepest points of our oceans.

There is still much to discover nowadays but, unlike in the time of Marie Tharp, we have high-tech and sophisticated equipment at our disposal. Moreover, both men and women are now involved in today’s worlds of hydrography and oceanography, so there is twice the ‘manpower’ to conduct the necessary activities. This will undoubtedly accelerate the rate of discovery from now on. Exciting times lie ahead!