Insights from the first commercial use of Fugro RAMMS 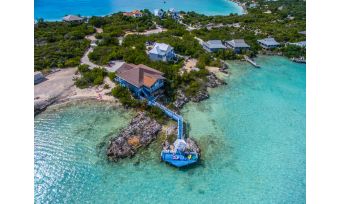 Insight into the use of the Rapid Airborne Multibeam Mapping System (RAMMS) for coastal and nearshore mapping at the paradisal Turks and Caicos Islands.

The Rapid Airborne Multibeam Mapping System, RAMMS, was developed over a period of three years before it was officially launched in the summer of 2018. Senior hydrographer Richard Goosen describes how Fugro used the system for coastal and nearshore mapping at the paradisal Turks and Caicos Islands.

A New Answer to an Old Problem

When it comes to shallow water, airborne Lidar bathymetry (ALB) has long been proven to be a fast, safe and cost-effective method for accurately defining nearshore water depths. Traditionally, ALB systems have been specialized to deliver either high point densities or good depth penetration, but not usually both, due to sensor design limitations. As such, ‘high-resolution’ systems are typically used in areas shallower than 15m, and ‘deepwater’ systems are used in areas down to 50m (water clarity permitting). While it is possible to merge data sets acquired by high-resolution and deepwater systems, doing so is time-, cost- and resource-intensive.

In recent years, international hydrographic agencies have challenged contractors to improve the efficiency and quality of ALB data acquisition and deliverables. Specifically, they have pressed for a solution that would support inshore nautical charting standards.

Fugro accepted this challenge, identifying and leveraging decades of shallow-water mine detection technology developed by Areté Associates, then refining it to meet hydrographic surveying needs. The system, known as RAMMS, was developed over a period of three years before it was officially launched in the summer of 2018.

RAMMS is based on third-generation Lidar technology and differs from conventional ALB sensors in the way energy is transmitted and received from the sensor. Traditional scanning systems use a pulsing laser that transmits discrete beams of laser light, which are then directed to the seafloor in a ‘pseudo swath’ using scanning or rotating mirrors. In contrast, RAMMS is a solid-state pushbroom system with no moving parts. Instead, it transmits a single diffuse pulse of laser light that generates a ‘true swath’ of energy approximately equal in width to the flying height of the aircraft. The returning signal is then focused into a streak tube receiver where it is beam-formed into a maximum of 900 individual slices (beams) comprising the full waveform.

After testing RAMMS on land, off the California coast and at an established Lidar testing facility in Fort Lauderdale, Florida, Fugro performed a proof-of-concept project in Belize. The RAMMS data acquisition tied in with a multibeam echosounder survey that was already underway for the UKHO and provided favourable results. With that, RAMMS was ready for commercialization.

In July 2018, the UKHO awarded Fugro a contract to survey 7400km2 of the Turks and Caicos Islands in support of the Foreign and Commonwealth Office’s Overseas Territory Programme. The project called for full bathymetric, topographic and orthoimagery data, collected to IHO Order 1b specification. With sparse existing survey coverage and shallow water depths (0m at shoreline to 40m at the reef edge), ALB was deemed the most cost-effective option for acquiring the project’s bathymetry data. Fugro proposed using RAMMS and was subsequently awarded the contract by the UKHO. To capitalize on the system’s availability in the region, the UKHO awarded Fugro a second shallow-water survey comprising 2500km2 off the northern coast of Belize. This add-on work was performed immediately after completion of the primary Turks and Caicos mission in support of the UK’s Commonwealth Marine Economies Programme.

As is expected for any new technology, challenges arose during this first large-scale deployment of RAMMS, with data management chief among them. Since RAMMS records the full waveform for each pulse, raw data capture is very large. Additionally, the high-resolution orthoimagery coverage meant that each 4- to 5-hour collection flight resulted in approximately 1TB of preprocessed data. Raw data deliverables for Turks and Caicos alone totalled more than 82TB! Due to limited local infrastructure, the data could not be uploaded to Fugro’s Houston data centre via a data link but had to be shipped by hard drive instead.

The project’s large size and diverse survey area also tested the system. The Turks and Caicos project required long flight lines, introducing several processing challenges that impacted the ability to create LAS files in the field. Staff also needed to update the field processing module several times during the project to account for the dynamic environment that spanned the shallow, extremely reflective bank, its topography, and a very steep drop-off along the edge of the barrier reef that surrounds almost the entire island chain. The nature of the software meant that each time a significant update was applied, all the data had to be reprocessed to ensure data cohesion. Similarly, new data artefacts were discovered that had not been encountered during development, requiring some lines to be reflown to fill unexpected data gaps.

These issues aside, by the time the Turks and Caicos part of the deployment had been completed, the system workflow, software, and processing routines had been refined back to the original design intention, which was to achieve initial LAS upload to the data centre in a 1:1 (flight time to processing) timeframe.

In addition to achieving over 10,000km2 of bathymetric data coverage, Fugro was able to contribute to the navigational safety of both regions by identifying 84 new shipwrecks, defining the coral reef and delineating the land-water interface. Delivered data will significantly improve navigation in the region, enabling the update of existing navigation products and the production of new, larger-scale navigation products. The interface between bathymetric and topographic data will also enable modelling of the potential impact of rising sea levels.

One of the benefits of the RAMMS pushbroom sensor is the across-track density that is achieved. At 325m above ground level, a 33cm sounding interval is achieved on each pulse, which easily exceeds the two soundings per 2km2 bin requirement for the survey. It was also hoped that the deployment would achieve 9 pings per 2km2 bin over most of the area, and this was achieved for more than 95% of the survey site; only sections of deeper water, breaking waves and poor water clarity were the exception.

Object detection probabilities for RAMMS are still being analysed over a variety of environments. However, for this project, the system repeatedly demonstrated the ability to not only detect but also delineate 2m objects. Where the seabed is highly reflective, it is possible that small objects may be lost in the overly strong return. Additional processing may be required in these circumstances to ensure effective object detection.

Given the region’s excellent water clarity, water penetration met expectations, achieving depths in excess of 40m. The extremely steep slope at the edge of the bank was delineated around the entire island chain.

The huge quantity of geodata gathered by RAMMS during both phases of the project was also used for a highly detailed seabed classification product produced by Fugro’s GeoConsulting group, using innovative automated geoprocessing techniques. The approach used a variety of GIS products derived from the RAMMS digital terrain model and a normalized intensity mosaic to identify areas of specific morphology and texture, requiring much less manual mapping than traditionally used.

The UKHO project provided the perfect opportunity for Fugro to commercially launch the RAMMS system. The good water clarity and relatively favourable conditions enabled Fugro to focus on producing great data in the absence of complications presented by more challenging areas. As a result, and aided by constructive feedback from the UKHO, Fugro now has a more refined processing software and a more streamlined workflow that is already showing benefits on more rapid project turnaround.

In the year since this first commercial project, Fugro has acquired more than 20,000km2 of data across the Americas. Most of this work has been completed with much smaller aircraft than would be possible using traditional ALB systems, which has reduced fuel usage and improved sustainability. Looking ahead, Fugro aims to further enhance the system by finalizing Unmanned Aerial Vehicle (UAV) deployment capabilities and enabling remote monitoring of the system, using Fugro’s Office Assisted Remote Services (OARS®). 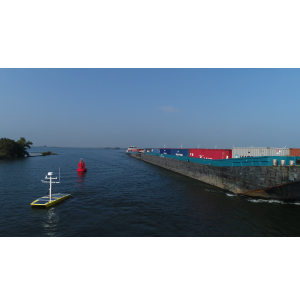