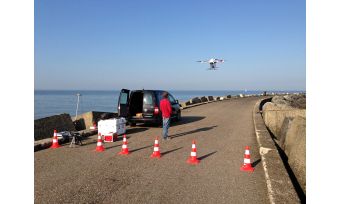 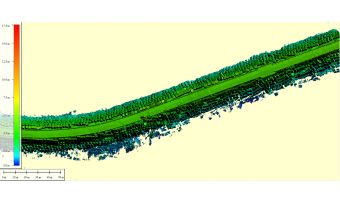 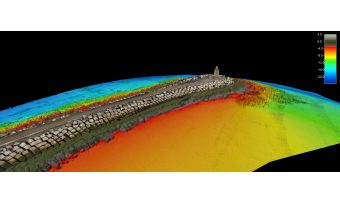 The North Sea Canal connects the Port of Amsterdam with the sea. The two breakwaters at the mouth of the harbour in IJmuiden, The Netherlands, are usually monitored on displacement of basalt block by airborne Lidar and on subsidence by annual levelling of permanent points. Could a camera-equipped UAS survey conducted simultaneously with a bathymetric survey provide information of equivalent accuracy? Here, the author shows that it could. Time series of 3D models of the breakwaters are useful for erosion and subsidence monitoring.

Monitoring of the breakwaters in IJmuiden, The Netherlands, is currently carried out using airborne Lidar together with spirit level / total station measurements. Airborne Lidar is excellent but very expensive when projects are small such as a breakwater survey. A UAS survey is a proper, and much more affordable, alternative.

Prior to the actual UAS survey, conducted in August 2013, 20 circular disks with a diameter of 35cm were placed as ground control points (GCPs) regularly distributed over a distance of 1,000 metres along the breakwater and measured with RTK GPS. GCPs are indispensable since onboard GPS only picks up the L1 signal and the IMU provides orientation at an accuracy of just one degree. Although sufficient for conducting a flight autonomously when a flight plan is uploaded, the use of the GPS / IMU alone is not accurate enough to create high-quality digital elevation models (DEMs). The GCPs were measured with a 72-channel Novatel Frog GPS that uses commercial correction signals from the ‘06-GPS’ network with an accuracy of 2cm in X and Y and 3cm in height. To assess the quality of the final DEM the 35 permanent points, which are measured yearly with total stations and levels to monitor subsidence of the breakwater, were also measured with RTK GPS.

After laying out the GCPs, the UAS survey was conducted with 80% along and across track overlap at low tide to ensure sufficient overlap with a multibeam echosounder dataset simultaneously collected at high tide. The overlap enabled mutual checks of both datasets. The UAS used, a Microdrone MD4-1000 equipped with a 24MP Sony NEX7, can stay airborne for 45 minutes (Figure 1). Three parallel flight lines at a height of 50 metres resulted in 433 images. After flight the camera was calibrated using specialised software and the values were used in the bundle block adjustment. Image matching resulted in the identification of around 4,000 tie points per image and a DEM with nearly 100 points per m2 on average (Figure 2). A seamless orthomosaic with a ground sample distance (GSD) of 2cm was created from the DEM. The vessel used for the bathymetric survey was equipped with RTK GPS, a motion sensor, a probe to measure the speed of sound in water and an ultra high-resolution R2Sonic 2024 multibeam echosounder (Figure 3). The survey was carried out by the Amsterdam-based company Deep BV at high tide to ensure the maximal overlap between UAS heights and bathymetric depths. The latter were resampled to a grid cell size of 10cm.

After integration of the UAS DEM and the bathymetric depths, the two datasets showed high resemblance so that a seamless DEM could be created (Figure 4).The 35 check points revealed a planar accuracy of 14mm and a height accuracy of 13mm. A further check using levelling and total station data supplied by the Ministry of Infrastructure and the Environment showed a height accuracy of 11mm (Table 1).

In The Netherlands, commercial UAS operation requires a permit from the Ministry of Infrastructure and the Environment. Permits are given to individual projects or to companies and Skeye is the first and, at present, the only UAS operator with a permanent company permit. To obtain this status all aircraft were checked on airworthiness, had to be insured for third-party liability and had to be registered in the National Aircraft Registry. Added to this, the pilots have to be BNUC-S licensed and operate according to the rules of the UK and NL Civil Aviation Authorities. However, a permit does not warrant operation everywhere at any time, since other airspace users have to be notified and provincial authorities require permission for take-off and landing outside an airfield.

UAS can achieve accuracies up to the centimetre level, which is higher than expected as the GCPs were measured with an accuracy of 2 to 3cm. Measuring the GCPs with higher accuracy may reveal even better results.

Pieter Franken has trained as a Naval radio officer and obtained postgraduate degrees in GIS, business administration and IT. He is co-founder and managing director of Skeye BV which is specialised in UAS surveys. Prior to this, he was sales director for Vision in Dubai and general manager for Aeroprecisa in Nigeria.