Hydrography for SAR Mission of Air Asia QZ8501 in Indonesia 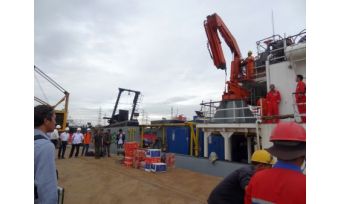 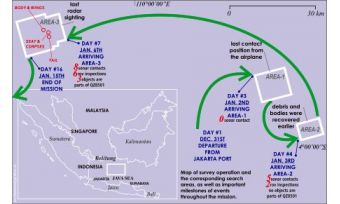 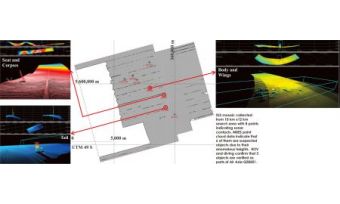 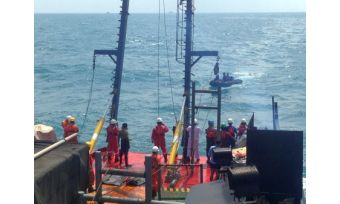 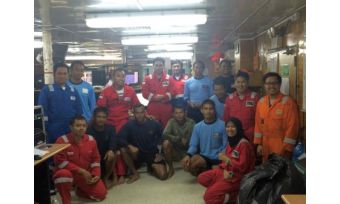 The Indonesian Association of Marine Survey Contractors launched a survey operation in early January 2015 to support the Indonesian National Agency for Search and Rescue. The operation was aimed at searching for a commercial plane, Air Asia QZ8501, reported missing on 28 December 2014 over the NW of the Java Sea, Indonesia. Using MBES, SSS and ROV, major parts of the crashed airplane comprising of the tail, seats, body and wings were discovered and located for recovery.

On 28 December 2014, a commercial airplane, Air Asia QZ8501, flying from Surabaya (Indonesia) to Singapore, was reported missing and believed to have crashed into the sea in the very north west of the Java Sea, Indonesia. The Indonesian National Agency for Search and Rescue (BASARNAS) activated a Search and Rescue (SAR) mission on the same day. To support this, a search survey operation was launched by the Indonesian Association of Marine Survey Contractors (AKSLI). The BASARNAS mission was also supported by other teams and vessels from other organisations, including an Indonesian Navy supply vessel, Ministry of Research and Technology research vessel and international parties. None of the parties involved were equipped with underwater imaging technology or specialised hydrographic survey personnel, except for the AKSLI team.

Following the activation of SAR, AKSLI established contact with BASARNAS to propose support (surveyors and equipment) to the mission. Asking for assistance from AKSLI corporate members was straightforward. With the endorsement of the Indonesian Surveyor Association, this humanitarian mission gained enthusiasm among its members. The Indonesian authority has limited exposure of the hydrographic survey industry that has long exclusively been engaged with offshore energy exploration and exploitation. In the end, AKSLI decided to launch its member vessel and was finally provided authorisation by BASARNAS to be involved in the search operation after a series of focus meetings.

The survey was conducted as seafloor scouting. It is an attempt to distinguish manmade or anomalous objects from the natural seabed including inherent features covering it. Such objects could possibly help interpret parts of the missing airplane. The primary difficulty faced by the AKSLI search survey team was that they were requested to find a defined object in an indefinite survey location, while they usually work to find anything in a definite survey position. The coordination of the search survey operation was under the full consent of BASARNAS. Determination of the survey area (central coordinates of the survey locations) was based on analyses developed by aviation experts facilitated by the Indonesian National Committee for Transportation Safety. The AKSLI team determined the search strategy by planning the survey extent (boundaries), survey line and line interval.

On 31 December 2014, AKSLI’s search mission team was mobilised from Tanjung Priok Port, Jakarta. The entire operation was completed by 15 January 2015. Figure 1 shows pre-mobilisation activity of the AKSLI mission. The primary strategy of the survey operation was to maximise the coverage of the seabed search, by tracking line-by-line from the central coordinates as advised by BASARNAS. Throughout the entire cycle of the search survey procedure, the processing of data, the subsequent interpretation, including immediate production of seabed charting and reporting, were carried out simultaneously with the onboard data acquisition.

On one of the first days of the mission, an AKSLI representative quoted to the press that by employing state-of-the-art hydrographic technology, the probability of finding an underwater object is 100%, however, unless the best estimated location of the crash is known, the survey duration could be without end.

As commanded by BASARNAS, the first survey location was the position of last contact with the airplane. Not a single sonar contact was detected here. In addition, the AKSLI mission was requested to search the second location. This site was about 15km southeast of the previous one. Debris and bodies from the crashed airplane had been recovered here earlier. No evidence of the crashed airplane was found here. Figure 2 provides an illustration of the survey milestones in three survey areas. Having completed two locations with negative results, on the seventh day the operation was continued at the location where it was believed that the airplane lost radar contact. Here, the survey area was 10km by 12km and divided into 18 main lines with 400m of spacing. The survey corridors were extended 4km southwest and 6km south-southeast, and widened 2km and 3km northwest with 350m of spacing.

Eight sonar contacts were recorded by side-scan sonar and their apparent heights were confirmed by MBES. ROV deployment and diving operations were conducted to verify 6 of them. These provided confirmation that the suspected objects identified as SO-01, SO-05, and SO-06 are parts of the missing airplane. In particular, SO-05 was identified as the tail. SO-01 was confirmed to be seats and corpses. It was validated that SO-06 was the body and wing. These three objects were situated on the seabed elongated approximately northwest-southeast across a roughly 3100m distance. Figure 3 shows side-scan sonar mosaic collected from the search area, with 8 points indicating sonar contacts, MBES point cloud data indicate that 6 of them are suspected objects due to their anomalous heights, while ROV and diving confirm that 3 objects are verified as parts of Air Asia QZ8501.

The AKSLI team was requested by BASARNAS command centre to recover objects found in SO-01 (seats and corpses). With the help of the Indonesian Navy Special Force divers deployed from Indonesian Navy vessel KRI-593 Banda Aceh, the recovery was accomplished as the technical crews on board lacked underwater recovery training. Figure 4 is a view of the MV Geosurvey working deck taken on the 9 January 2015 during the recovery task: recovered objects were towed by the rubber boat approaching the AKSLI vessel.

From the time of arrival in the survey area, the mission was able to detect eight suspected objects in roughly 12km by 15km survey area within 24 hours. Three sites of the crashed airplane were located within the next seven days. Several remarks could be made. Among others, the limited knowledge on the actual sea state and currents during the operation hindered the team from efficiently verifying the sonar contact using ROV and diving operations, although the water depths ranged between only 25m and 38m. Presence of horizontal and underwater positioning devices (attached to divers’ gear) enabled the accurate marking of the found underwater objects. This made the subsequent recovery mission effective.

It must also be underlined here that the best practice of the hydrographic survey could be attributed to the specific mission, i.e. underwater SAR. Readiness of crews and equipment, including availability of a dedicated survey vessel ensured effective coordination and execution of the search survey mission. In addition, the trust given to the Indonesian hydrographic services companies as well as availability of international reference and competence standards enabled the maintenance of a high level survey procedure and specialised skills of survey team members along with the persistent adherence to strict safety standards. Figure 5 is a picture of technical crews on board with Indonesian Navy divers.