Utilizing New Methods to Research Impacts on a Precious Waterway 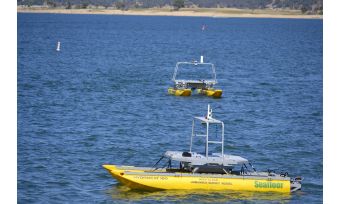 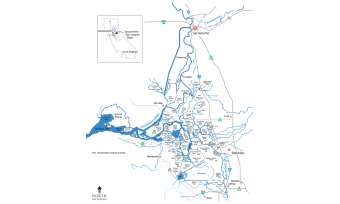 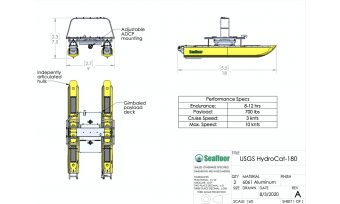 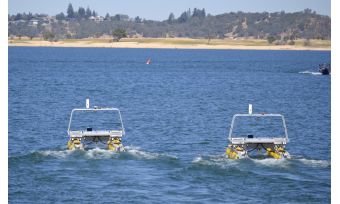 Seafloor Systems was recently contracted by the U.S. Geological Survey (USGS) to develop two custom HydroCat-180 unmanned surface vessels (USVs) that will be used to monitor the impacts of saltwater intrusion from the Pacific Ocean into the Sacramento-San Joaquin Delta in California. The subsequent research using the new autonomous vessels will provide new insights into maintaining balance within the complex ecosystem.

The Sacramento-San Joaquin Delta, commonly referred to as the California Delta, is the hub of the state’s water supply system and a teeming wetland bionetwork (Figure 1). About 500 plant and animal species call the area home, making it one of the largest estuaries in western North America. Two-thirds of California’s salmon pass through the delta on their way upstream to spawn, as well as half of the state’s migrating waterfowl.

As settlers began to inhabit the area in the mid-nineteenth century, they saw enormous agricultural potential in the natural peat soils, which are rich in nitrates from partly decomposed organic matter. Reclaiming the land for farming meant building dirt levees to prevent periodic flooding of brackish semi-salty waters that could ruin crops. In the process, it disrupted natural habitats.

(Article continues under the figure)

Many species, including the delta smelt, have experienced habitat loss and detrimental change since farmers began to convert their territory into agricultural lands. In addition to agricultural activity, the man-made California Aqueduct system that transports freshwater to southern California redirects the flow of water from north to south as opposed to the natural west to east direction. Coupled with increasingly common droughts, the flow of fresh water from the Sierra Nevada Mountains to the delta has been reduced, causing significant salinity intrusion.

The growing delta water quality issue provides the impetus for agencies like the USGS to observe and mitigate the effects of saltwater intrusion. On the one hand, California relies on the water arteries for farm irrigation and drinking water. On the other, the fragile habitats of native species are being altered at an alarming rate.

The delta is an extremely diverse environment, meaning that traditional hydrographic survey methods struggle to account for the constant change that takes place from one minute to the next. The delta is heavily influence by the Pacific Ocean, taking its cues from the motion of high and low tides. Consequently, the flow rate and water levels can change rapidly in a given day. Pile on the potential for rainfall upstream in the neighbouring Sierra Nevada Mountains and Central Valley, and survey readings can become skewed. From a safety standpoint, sediment and debris can wash down-river, creating potentially hazardous conditions for the use of manned vessels in the delta during the winter and spring months.

Previous survey efforts by the USGS relied on a manned vessel to hold a strict transect across the water, which can often take more than 30 minutes to complete. During this time, the water level can change by more than 10 feet (3 metres), resulting in inconsistent data acquisition. With their new HydroCat-180 USVs (Figure 2), the USGS hopes to cut the data collection time in half, improve the track line by 95%, and significantly increase the accuracy of the resulting water flow and depth model. Personnel will reduce their exposure to risks caused by rainfall and flooding events.

Flow rate and depth data will be collected using an RD Instruments Acoustic Doppler Current Profiler (ADCP), mounted under the payload deck of the USVs. The two USVs will simultaneously conduct surveys along pre-programmed routes, transferring the task of maintaining a precise track line to Seafloor’s AutoNav system (Figure 3). Known in the hydrographic survey industry as ‘mowing the lawn’, the action of the two vessels traversing the water while emitting high-frequency pulses of sound ensures an adequate amount of data collection. The USGS cannot disclose many of their practices with the new vessels, but the corresponding data will shed light on the intrusion of saltwater into freshwater zones of the delta.

Preserving the Delta for the Future

The landmark contract with the USGS was awarded to Seafloor Systems with a six-month deadline and, despite some supply chain issues caused by the COVID-19 pandemic, the vessels were completed and delivered ahead of schedule. Seafloor, which up until now focused their efforts on smaller, calm water vessels, hopes that this application of the two 18ft (6m) HydroCat-180 will expand their reach into the nearshore maritime sector. Located a mere hour’s drive from the delta region, Seafloor has a vested interest in protecting the precious natural resources in the region. There is no easy answer to how the state will handle this growing issue, but frequent scientific observation is a key component in taking the next steps. The HydroCat-180 USVs will strengthen efforts to form a symbiotic relationship between a modern society and the natural environment.