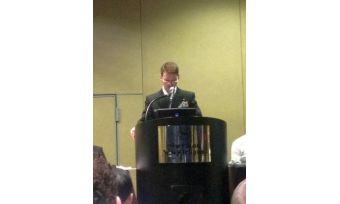 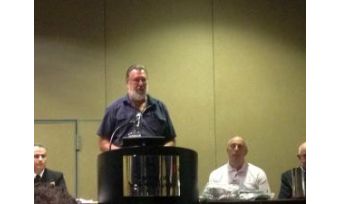 From 26 to 28 March 2013, US Hydro 2013 took place in New Orleans, at the mouth of the Mississippi river, USA. Just a block away from the famous French Quarter, the venue provided the participants with lots of opportunities to meet up and enjoy themselves. The programme consisted of technical presentations, an extensive series of workshops, an exhibition with over 60 booths and a well-attended partner programme. At the end of each day, there was a happy hour with music, snacks and drinks.

The keynote address was delivered by two American Rear Admirals: NAVOCEANO Commander Brian Brown and NOAA’s new director Gerd Glang. They provided overviews of their recent activities, and also spoke about the negative effects of the current financial situation of their government. One effect was obvious: only very few American government officials were allowed to attend. Although a couple of government presentations had to be cancelled, most government presenters were able to find a stand-in.

A new aspect was the organisation of lightning round presentations of only five minutes, without questions. This gave the audience an opportunity to get a first impression of a project, and contact the authors later. In addition, 23 students presented their work with posters. Their enthusiasm was sparked further by the selection of a poster for an award.

Three distinguished hydrographic professionals had the honour of being inducted into the new Hall Of Fame of The Hydrographic Society of America. Dr. Lloyd Huff, Doug Moore and Jack Wallace received this honour with short acceptance speeches, each of them looking back on their impressive careers.

As ever, the technical programme had several strong contributions from the NOAA/University of New Hampshire’s Joint Hydrographic Center. Dr. Brian Calder was involved in a presentation about the CHRT algorithm, which improves the ideas of CUBE using grids with variable resolution. He also spoke about ways to estimate the deepest depth of the Challenger Deep in the Marianas Trench – the deepest point on Earth. This exercise is somewhat unusual, as hydrographers are used to always looking for the shallowest depth. Dr Jonathan Beaudoin spoke about optimal frequencies for water column variability measurements, and about forecasting water column variability using global oceanographic models. Dr. Shachak Pe’eri was involved in several presentations about remote sensing. Besides airborne Lidar, there is considerable progress in bathymetry using satellite remote sensing. This technique has the potential to give an impression of rather shallow areas that are seldom or never surveyed with other techniques.

There also was a strong Canadian presence, with contributions from CHS, CARIS and the port authorities. Access to the ports along the Saint Lawrence River remains a challenge, where technology could make a big difference. A shallow and narrow estuary with large tides and high-intensity shipping provides a need for complicated planning and accurate hydrographic information.