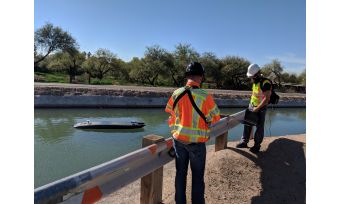 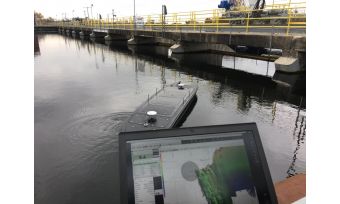 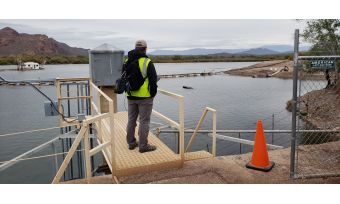 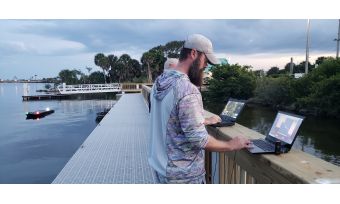 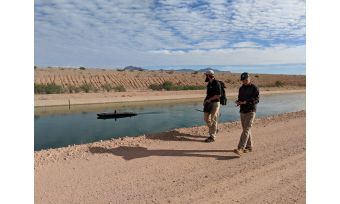 Inspection of dams is a high-risk task for divers because of strong currents and eddies. The use of emerging technologies such as unmanned surface vehicles equipped with echosounders and sonars can lower those risks. Such systems can perform subsurface dam inspections quickly and effectively without putting humans at risk, as this US case study shows.

Overused roads, outdated railway systems, brittle power grids, crumbling bridges and suchlike all take a toll on the economy and, tragically, sometimes even lead to loss of life. Failing infrastructure is an issue for most countries, and likely more so in developed nations that still depend on infrastructure that is centuries old. In Europe, for example, some of the infrastructure dates back to Roman times. Most nations therefore have systems in place to evaluate bridges, roads, dams, railways and other important components that are part of daily life. In the USA, the nation’s civil engineers provide an assessment of the nation’s 16 infrastructure categories using an A-to-F report format. While the USA is a relatively ‘new’ nation compared to most countries in Europe, it nevertheless has some old infrastructure that is showing its age – and that includes dams. Among the 16 infrastructure categories, the country’s 90,000 dams fared even worse than the overall national average (D+), attaining a grade of D.

Dams are critically important to many people’s daily lives and local communities, providing essential benefits such as hydropower, flood control and irrigation. It is no exaggeration to say that, without a dam, many communities, cities or towns would simply not exist. The condition of dams receives a great deal of attention – and rightly so. While a road buckling or a bridge collapsing might injure or even kill a few people, a dam failing could suddenly flood entire communities, potentially causing scores or even hundreds of deaths and untold financial loss.

In January 2019, for example, the failure of a Brazilian iron-ore mining company dam – the second dam failure there in just over three years – flooded the town of Brumadinho. Several hundred people died in the event, and the disaster dominated international headlines for months. But what was lost in most of the reporting of the tragedy was how better dam inspections could avert such failure – because that dam failure was not a unique event. In 2018 alone, there were major dam failures in Kenya, Afghanistan, Laos and Myanmar with a total of almost 100 fatalities between them. Europe has also had its share of dam failures. In fact, a recent academic study ranked Europe second in worldwide dam failures. The list of causes included sub-standard construction, long-term use, geological instability, war and human factors.

In the USA, part of the challenge of managing and sustaining this important part of the nation’s infrastructure is the fact that, by 2025, seven out of ten dams in the country will be over 50 years old. Half a century ago, dams were built in line with the best engineering and construction standards of the time, but that cannot compare with the stringent design criteria used today. It is perhaps no surprise, then, that civil engineers have identified over 15,000 US dams as a high hazard, and over 11,000 more as a significant hazard.

But while there is the desire and need to inspect dams, the process of doing so can be daunting. One major challenge in determining the condition of a dam – let alone deciding what shoring up or repair work is needed – is the difficulty of surveying the underwater portion of the dam. Such dam inspection work currently involves divers, which is slow, expensive and hazardous. In fact, the danger of using humans to survey the underwater portion of dams is often underestimated. Many dams have violent, high-speed, high-volume currents that even the strongest divers cannot cope with. The human risk factor can therefore be seen as a likely obstacle to thorough dam inspections worldwide, but until recently there was no reliable method of surveying the underwater portion of a dam without putting humans at undue risk. Now, however, there is a viable alternative, in the shape of emerging technologies such as unmanned vehicles equipped with echosounders and sonars. These systems can perform subsurface dam inspections quickly and effectively without risk to human life.

Application of Dam Inspection Technology in the USA

In one example of how that new technology has been used to survey dams in the USA, an unmanned surface vehicle was combined with a high-resolution multibeam imaging echosounder/sonar to conduct a surface and underwater survey of the Keokuk Dam on the Mississippi River. The Keokuk energy plant was graded as a ‘nine out of ten’ on the scale of inspection difficulty due to the strong high currents and dangerous eddies caused by water flowing through the dam. The facility’s owner and operator therefore contacted a Florida-based unmanned surface vehicle manufacturer, Maritime Tactical Systems (MARTAC) Inc., in order to conduct a thorough survey of the underwater portions of this dam using an appropriately equipped USV. MARTAC produces a family of MANTAS unmanned vessels built on a catamaran hull. The owner of the Keokuk Dam selected a 12-foot MANTAS for this underwater bathymetric imaging task, and it was equipped with a Teledyne Reson T20 multibeam echosounder/sonar.

The objective of the Keokuk Dam hydrographic survey was to use the USV to map underwater structures and perform the survey of the upstream and downstream sections of the dam. This comprehensive hydrographic survey would provide the input for a complete high-resolution bathymetric map and inspection report that was necessary to meet the imaging and scanning requirements of the safety group responsible for certifying the dam.

Earlier maps of the Keokuk Dam had been developed using divers and manned surface vehicles. Not only did this technique put divers and other operators in harm’s way, but the data also lacked the resolution to detect and identify areas of scouring, defects or hidden structural problems. Use of the autonomous USV equipped with the multibeam echosounder/sonar was expected to correct these issues. The USV solution performed as expected with excellent resolution. The final survey took less than two days to complete and was performed jointly by a MANTAS remote operator seated alongside a hydrographer. Operating as a team, they coupled the USV track and the real-time display of the echosounder imaging to achieve the best possible images of the dam, including the underwater section.

Based on the results of the Keokuk Dam hydrographic survey, additional proof-of-concepts were requested and demonstrated, and the technique is now being studied for use in many American cities and towns where there is concern about local dams. With over 26,000 dams deemed structurally unsound in the USA alone, there is a virtually limitless market for this safe surveying method. This approach can readily be extrapolated to other countries and especially European nations, many of which have dams older than those in the USA.

The continued introduction of unmanned surface vehicle technology into the commercial arena will further spread the need for USVs in a number of other areas beyond dam inspections. In view of the average D+ grade for the USA’s infrastructure in general, USVs will likely be in increasing demand for survey operations for ports, inland waterways, bridges, dams, levees, canals and other infrastructure that cannot be effectively or safely inspected by humans.

It is clear that the stakes of dam failure are high. The ability to use commercial off-the-shelf technology such as MANTAS for rapid and comprehensive bathymetric imaging is a potentially life-saving solution for all nations in terms of safely conducting successful dam inspections and undertaking the necessary infrastructure upgrades to prevent future disasters. 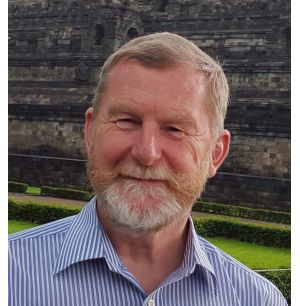