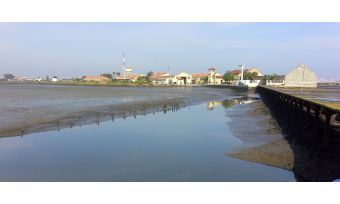 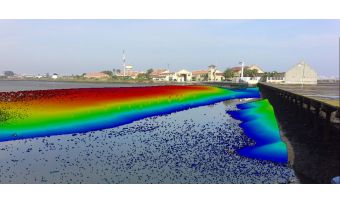 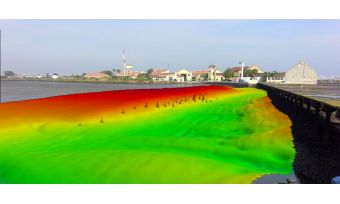 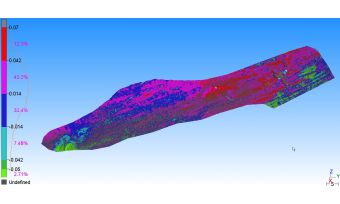 Hydrographic surveys in very shallow waters can have several applications such as nautical chart updating, performing environmental monitoring and characterisation, determination of dredged volumes, establishing navigational channels or defining general coastlines. When full bottom search is required, surveys in such areas will involve many hours of work, require several specialised technicians and, in most cases, the use of expensive equipment. Therefore, in order to gather coastline altimetry data, many hours can be spent conducting survey lines with GNSS equipment, sometimes in unfriendly and rough terrain. In order to find a way to optimise these tasks, Leica Geosystems Portugal (LG) and the Portuguese Hydrographic Institute (IHTP) carried out a joint survey to gather bathymetric data at an intertidal zone using a Leica ScanStation P20. Data from the Kongsberg EM 2040C was used to evaluate the Laser Scanner survey.

Leica’s ScanStation P20 is an ultra high-speed pulsed laser scanner with the capacity to scan up to 1 million points/second with an accuracy of 3mm at 50m distance. This system is mainly used to capture 3D images of objects, buildings and landscapes.

The echo sounder used for this comparison was the Kongsberg EM 2040C. It is a shallow-water multibeam echo sounder for high-resolution mapping and inspection applications. It has a wide frequency range from 200 to 400kHz, short pulse lengths and large bandwidth. It uses Frequency Modulated (FM) chirp to extend the range and provides a beam width of 1° x 1° at 400kHz.

A muddy shallow-water area (Figure 1) was selected to gather the data. Two surveys were carried out: one with Leica ScanStation P20 during a low tide period and another one with the multibeam echo sounder during a high tide period.

To guarantee an accurate and reliable comparison of the surveys, vertical and horizontal references should be shared. Therefore, a common reference frame based on local benchmarks was established, previously surveyed using GNSS, that was used for Laser Scanner orientation and GNSS reference station set-up for the hydrographic survey.

During a low tide period, 6 full dome scans were conducted from 6 different benchmarks, where point clouds were acquired with a 6mm resolution at 10m distance (Figure 2). Each scan took about 2 minutes, and it was decided that no photos should be taken if radiometry information was not relevant. It was possible to apply topographic methodologies for laser scanner orientation (Resection and Known Backsight) due to ScanStation P20 dual-axis compensator. As mentioned earlier, the hydrographic survey using the Kongsberg EM 2040C took place during a high tide period with average depths of 3m. For positioning and attitude integration, a Seapath 330RTK system with Differential Global Navigation Satellite System (DGNSS) was used based on Real Time Kinematic (RTK) corrections.

The Multibeam data was processed by IHPT on CARIS HIPS and SIPS v.8.1.9. To obtain tide reduction RTK information was used together with geoid undulation. All other corrections were applied during data acquisition. The final product was a CUBE Surface with 25cm resolution (Figure 3) and an ASCII file (.xyz).
Leica Cyclone software was used to process ScanStation data. A very simple task of point cloud cleaning and mesh creation was enough to calculate the laser scanner final surface that was exported as an ASCII file (.xyz).

Afterwards, both ASCII files were exchanged between institutions. LG created a mesh from the multibeam ASCII file and compared it with the mesh created from the ScanStation data. The comparison between both meshes was done using 3D Reshaper (www.technodigit.com), where both surfaces were imported (Figure 4).

Simultaneously on CARIS HIPS and SIPS, the depth layer from the 25cm resolution CUBE surface created with EM 2040C data, was compared with a 25cm resolution average depth surface generated by the laser scanner ASCII file. Because of the different technical features of the systems (sound propagation vs electromagnetic emission), the different methods of positioning and data processing, and the nature of the bottom, which was highly inadequate for laser detection (muddy, dark in colour with water plants and clams, as well as other factors), it was not really expected to get very good results.

The results obtained from the data comparison were quite good. The average difference between the depths given by both systems was less than 0.015m with a standard deviation of approximately 0.03m.

In addition to the depth difference analysis, we were also able to compare the capacity of object detection and characterisation. Because of its exceedingly high resolution, it was not surprising that the small wooden pillars visible in Figure 1 were detected and very well defined by the ScanStation P20. In addition, the multibeam system revealed great object detection. Considering the inherent limitations of sound propagation in the water and the physical resolution of echo sounders, EM2040C showed good performance and despite the fact that these structures were represented as cones, all minimum depths of the wooden pillars seem to have been detected (Figure 5).

This experiment makes it possible to consider the use of Laser Scanning technology in hydrographic surveying. It has been shown to be a proven solution in very shallow waters, particularly when full bottom search is needed on intertidal, small and confined areas where other Lidar systems or drones are too expensive. Its efficiency and high-quality results proved to be an added value in those arduous survey conditions.

However, these types of sensors cannot achieve water penetration, so in deeper zones, an echo sounder must be used. Multibeam or interferometric echo sounders should prove to be effective.

In the near future, IHPT will strive to use laser scanner technology for two different tasks: surveying in dry areas at low tide and the acquisition of coastline altimetry data for later inclusion on nautical charts. Looking ahead, this technology can also provide numerous solutions when, for example, we consider its integration with unmanned aerial vehicles, giving us the remarkable advantage of easily reaching remote areas and quickly sweeping an entire zone.

In short, the most positive outcome of the study is that another solution for hydrographic surveying was found. From now on, tasks like gathering coastline altimetry data or achieving full bottom search on intertidal areas can be considered to be less challenging and risky activities.