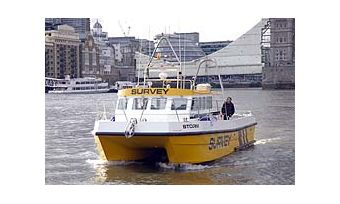 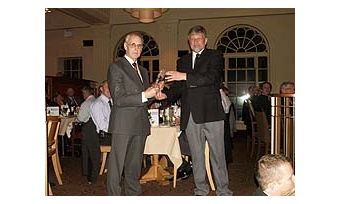 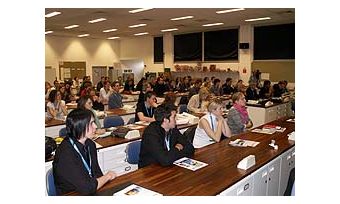 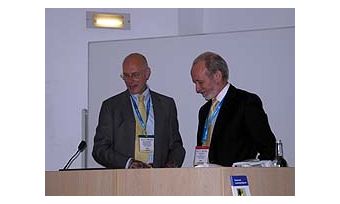 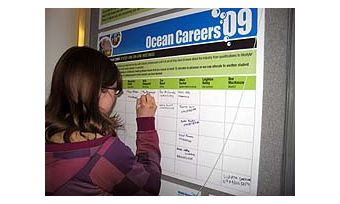 From 31 March to 2 April, Ocean Business and Ocean Careers took centre stage at the National Oceanography Centre in Southampton (UK), followed by Offshore Survey from 1 April.

However, on 30 March there was already much ongoing activity; stands were set up, delegates arrived. Hydro international was invited to join RESON, before the opening of the show, to see the RESON sonars in action. Surveying the harbour of Southampton on board of Southampton's Port Management Protector, a few remarkable features were discovered that even the regular harbour surveyors had not discovered before! In a short time, the mechanisms of the various sonars, for bathymetry and forward-looking, were discerned. To demonstrate the high-tech roll compensation of the software, a low-tech rolling mechanism was put in place: a few heavy men walking from starboard to port and vice-versa.

At Ocean Business, Deep commissioned her new survey vessel S/V Storm. The vessel is a purpose-built 12m Blyth catamaran. To facilitate various survey sensors, the vessel is equipped with a hydraulic-operated bracket through a moonpool between the hulls and an A-frame. The vessel will be used on survey contracts that Deep has with the Dutch government and various windfarm-related clients. Key survey equipment on the vessel are a SEA Swathplus echosounder, IXSEA Octans, L-3 Klein 3000 side-scan sonar and an inshore sled-operated Innovatum Smartrak cable tracker.

The exhibition was, of course, accompanied by several social events: a welcome reception with drinks, a wine trail and the traditional gala dinner. During the Ocean Business dinner, the Association of Maritime Scientific Industries (AMSI) presented the Business Person of the Year award to John Partridge of Sonardyne International. According to the adjudicating panel, Partridge has made a significant contribution to the business of marine science and technology. During the 1960s, John Partridge was one of the three pioneers of the oceanic industry. Subsequently, he started Sonardyne in 1971, which grew to the position of market leader through a focused approach on product quality, and at the same time continuing technical development and maintaining a keen eye for sound business principles. John appeared to be speechless when accepting the award, but he did tell Hydro international that it is the employees of Sonardyne who truly deserve the recognition for all achievements of the company.

Ocean Business also hosted the first Ocean Careers (‘09) - a three-day event, initiated for students to hear about job opportunities and career advice in marine science and ocean technology. The first morning was started off with a keynote speech by Alastair MacDonald (see the interview in the March issue of Hydro International), managing director of TMS International and also the conference chair of Offshore Survey. He summed up perfectly the main reasons to go job hunting in the ocean industry: "It's a very good industry to make money, to travel a lot or to do something for the environment".

MacDonald gave the audience of 100 to 150 students some tips. He advised the students to always bring their CV, and always carry a notebook and pen. Furthermore, he suggested asking for business cards and asking questions, as people in the industry are very approachable. To conclude, he mentioned that it is important to have interpersonal talent and teamwork skills. After every day's keynote, several professionals from the industry gave 10-minute presentations, explaining more about the industry, giving tips, showing the worldwide working opportunities and examples of jobs in the ocean industry in general and their companies in particular. Many of these companies find themselves in the worldwide crisis of recruiting young people.

Ocean Business also featured the announcement of the yearly Fugro Global Environmental and Ocean Sciences (GEOS) award, given to a student of meteorology and oceanography who has written an excellent paper. Amanda Maycock received this year's award. The panel of three from Fugro GEOS, the Society for Underwater Technology (SUT) and the industry had a selection of papers to choose from and Amanda's was chosen unanimously. Andy Moore, technical manager of Fugro GEOS, explained to Hydro international that a selection of universities that were within the subject area and were of interest to Fugro GEOS was invited to send their best student paper to the committee. Maycock's paper is expected to be submitted to the Journal of Climate Dynamics within a few days and is entitled "The Role of Stratosphere in Seasonal Forcasting". Maycock, kindly answering our questions, said that she has now started her PhD. Moore hoped she would consider the industry after she finishes her PhD. She replied that she would.

Chairman Alastair MacDonald welcomed everybody to the second specialist conference focussing on the offshore survey industry, especially in this economic difficult time. While the keynote speaker John Westwood, of Douglas-Westwood, outlined the prospects for the global ocean industry business, it was so quiet you could hear a pin drop.

The technical conference Offshore Survey 09 started at the National Oceanography Centre in Southamptom (UK), with about 70 attendees. MacDonald mentioned he had experienced quite a few recessions in his 40-year career in the business, and Westwood illustrated this by showing a diagram proving that, on average, there is a recession every five years, mostly lasting about 18 months (e.g. 20 in past century). The relative unbroken prosperity of the last 25 years is unprecedented. Westwood raised his finger, saying that he had never seen a five-year business plan that had included a recession period. The current recession is a very serious one, but after recessions oil demand increases again. While the developed world has reduced its oil consumption, the developing world will increase theirs.

Besides oil, Westwood provided an analysis on natural gas; offshore wind, wave and tidal developing sectors; and the offshore renewables industry. In the longer term (4 to 10 years), Westwood predicts the recession to end, an increase in economic activity and global trade, an increase in oil demand and an increase in prices. With that he expects an increase in demands for surveys, outperforming of well-positioned equipment and services companies and, again, there will be a scramble of hardware and people. He ended by saying that 2009 could be a great time to invest.

Tips from the Business

Speedy one-on-one meetings for students to meet face-to-face with industry professionals were scheduled during the afternoon sessions of Ocean Careers ‘09. The meetings were a huge success. What did the industry reveal? Students were able to pre-book their personal 10-minute mentoring sessions themselves, giving them the opportunity to find out all they needed to know about the industry. After sitting down with students asking me questions, my fellow professionals were kind enough to let me listen in. Most professionals started off by asking the students about their educational background, and this was followed by the students firing off questions; such as whether we thought they were on the right track, whether we knew of any good internships or summer schools. I was asked whether we would hire freelancers, others were asked about job opportunities.

What positively surprised me was that the students were not all youngsters per se, leading to at least one meeting of a young professional and an elderly gentleman. Some of the questions were quite technical, while others focussed on the company's internal educational programme and potential career paths within such a company. One of the professionals appeared to be a recruiter, asking one student if he maybe knew more fellow students with the same educational background.

Some students had already digested the earlier tips and brought their CVs to the speed dates. One student was even smart enough to ask whether her CV was appealing enough to the particular professional she was talking to, or whether it needed any changes. In fact, some of the sessions unfolded as pre-job interviews. One thing was clear to me: it is definitely a great way to get yourself in the picture of a company or organisation in the ocean industry!