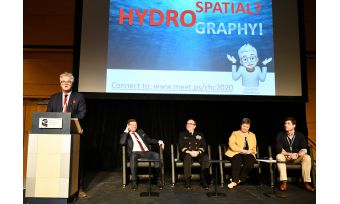 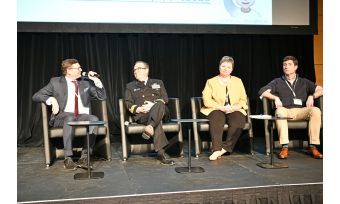 In the last decades, we have progressed from ‘graphic’ to ‘digital’ and now to ‘spatial’. During the opening plenary session of the Canadian Hydrographic Conference (CHC) 2020, the author gave a presentation on ‘What is Hydrospatial?’, before inviting a panel of four senior figures and the audience to discuss the topic. This article is a summary of a detailed published Note in the International Hydrographic Review (IHR).

What we do and its impact is obviously more important than a word can convey. However, words are how we express ourselves and, in particular, how we transmit our ideas and concepts to others. The marine geospatial revolution is so dramatic that it is recommended to adopt a new word to describe it; a word that conveys the image of the modern, hi-tech, multi-role, digital data environment in which we now operate. This word is ‘hydrospatial’.

The type of data and the way in which hydrographers collect it is expanding, and the scope now goes well beyond nautical charting for safe and efficient navigation. This variety of data is now used and fused with data from land, coastlines, inland waters and offshore. This is the ‘why’ and the ‘when’ of hydrospatial!

Both defence and commercial shipping users of traditional hydrographic products, data and information now seek additional information and capabilities from hydrographic data. An ever-increasing community of additional users that seeks a green future through a sustainable blue economy is joining them. These are the users ‘who’ need hydrospatial data.

The managers of coastal zones must consider sea-level rise, coastal erosion, crustal subsidence and much more. Nearshore, offshore and remote areas everywhere (including polar regions) are becoming more accessible and attractive both for natural resources and for adventurers. All of this drives the need for ‘where’ hydrospatial is needed.

Faster adoption of all remote sensing technologies and various autonomous crafts for marine data acquisition (satellite, airborne, surface, underwater, etc.) is needed. These are ‘how’ high-tech capabilities evolve and they deserve to be recognized with a name like ‘hydrospatial’, which inspires inclusion beyond the traditional.

It is suggested that the definition of ‘what’ hydrospatial is be based on a modified version of the existing February 2020 International Hydrographic Organization (IHO) definition of hydrography, as follows:

25/02/2020: Hydrospatial is the branch of applied sciences which deals with the analysis, understanding and access to static and dynamic marine geospatial digital and analogue data and information, digital signals, measurement and description of the physical, biological and chemical features of oceans, seas, coastal areas, lakes and rivers from all possible available data sources in near-real time and real time, including their history and the prediction of their change over time. This for the purpose of: timely access to a standard, high-quality and the most up-to-date marine spatial data infrastructure; safety and efficiency of navigation; and in support of aquatic and marine activities, including sustainable blue environment and economic development, security and defence, and scientific research.

Quotes from the Panellists

Based on the opening presentation, the four panellists aired their views, including the following quotes:

The IHO Secretary General commented: ... “to adopt a new word and official definition in the IHO Hydrographic Dictionary S-32 would require a formal proposal put forward to the affected experts of IHO’s Hydrographic Dictionary Working Group. Hydrography is clearly going through major important changes that will require an expanded role serving an increasing group interested in the blue economy proponent... If this requires a new word to express the expanded scope and to address the third and fourth dimension of our undertakings, ‘hydrospatial’ will find its way into our spoken and written language.”

The Hydrographer General of Canada remarked: …“showing how a new word can fill a gap by using it in sentences is more important than having it officially adopted. Just use it!”

The Director, US Office of Coastal Surveys, provided the comment: …“The field of hydrography is changing rapidly – we have access to both a wider variety and a bigger volume of relevant data than ever, and the demand for our data and expertise is growing beyond charting. This conversation about the language of identity is just the beginning. We need to also take a hard look at our education and qualifications in light of these changes.”

The Chair of the Canadian Ocean Mapping Research & Education Network (COMREN), representing Academia, said: … “accredited academic programmes have already added material, courses and learning objectives that go beyond international requirements to adapt and keep up with the rapid technological changes in hydrography that could be qualified as hydrospatial... ”

During this session, a live voting application to engage the audience was used. Detailed questions and results can be found in the Note published in the IHR. The vast majority considered that hydrography is going through a very important period of change, that education and training is adapting well, that hydrography is impacted by Artificial Intelligence (AI), that more time will be invested in data quality from multi-sources than from field work, and that more data will be acquired through crowd-sourced bathymetry, satellite-derived bathymetry and autonomous platforms. The majority agreed to adopt the word ‘hydrospatial’.

Traditional hydrography as we know it, both in the past, now and for the future, is essential. As we enter the United Nations Decade of Ocean Science (2021-2030) and start the Nippon Foundation Seabed 2030 Project, moving toward the greater use of the word ‘hydrospatial’ highlights the traditional benefits and role of hydrography, while also emphasizing the new roles for our hydrographic geospatial data and the expertise in an exciting, modern and inspirational way.

Denis Hains is president and CEO of H2i. This article reflects only the opinion of the author and H2i.