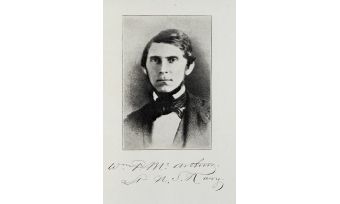 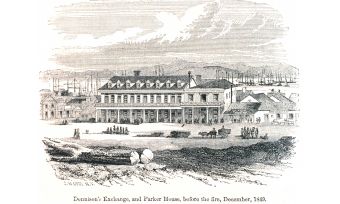 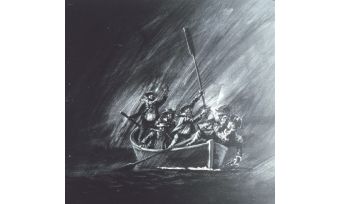 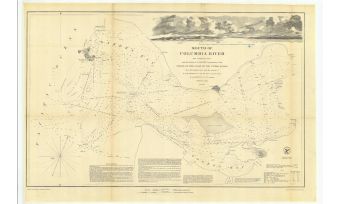 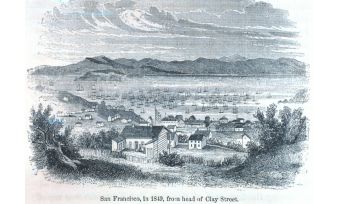 Lieutenant Pope McArthur was appointed a midshipman in the United States Navy in 1832 and followed a fairly conventional career path for the first few years of his career. He served in the Seminole Wars and in 1838 was shot in both legs, with one lead ball remaining in his leg for the rest of his life. After convalescing at the naval hospital he was assigned in 1840 to the United States Brig Consort, which was conducting surveys in the Gulf of Mexico under the auspices of the United States Navy. This work apparently was agreeable to him as he requested assignment to the United States Coast Survey. Read more about McArthur’s work, before his life was cut short in December 1850.

McArthur advanced quickly and by 1846 was placed in command of the surveying schooner Vanderbilt. That year he worked in the northern Chesapeake Bay sounding out numerous rivers to the head of navigation.

The following year he worked in North Carolina in Albemarle Sound. At the conclusion of work there he requested that he return to Chesapeake Bay to complete surveys begun the previous year. For this Superintendent Alexander Dallas Bache wrote of his ‘characteristic zeal’, a rare complement for one who was still active in the work of the Survey. The following year, 1848, saw McArthur working once again in the sounds of North Carolina.

At the end of 1848, McArthur received orders to proceed to the frontier areas of the West Coast of the United States. California had recently been acquired and Oregon Territory had seen an influx of settlers and trade that made hydrographic surveys a high priority. In the winter of 1849-1850, he proceeded to New York to put the Revenue Schooner Ewing in shape for both the arduous trip to the west coast of North America and also to outfit it for surveying work. After outfitting the Ewing, command of the vessel was turned over to Lieutenant Washington Bartlett who proceeded to the West Coast via Cape Horn on 9 January, an arduous voyage made in the austral autumn. McArthur, because he had to finish office work associated with the North Carolina surveys, left for California on 17 March. He proceeded to the Isthmus of Panama and made it to Chagres on the Caribbean side in relative comfort; but from there to San Francisco it was strictly improvisation. Upon arrival in Chagres, he found an overcrowded lawless town filled with gold-seekers as the great California gold rush was just beginning. Because he was a United States officer, he was made head of a vigilante committee and within 48 hours had restored order. He then took a boat up the Chagres River and went overland by mule train to the city of Panama. There was no transportation available to San Francisco and many of the travellers in the city were becoming sick with various tropical fevers. A delegation of gold-seekers approached a local merchant who was using the Ship Humboldt as a coal storeship.

They bought the ship with funds from 400 passengers putting up USD200 apiece and selected McArthur as commanding officer.

McArthur wrote his father on 11 May, “So if we have some good luck we will be ready for sea by Sunday. Then ho! For California with 400 of the roughest customers you ever saw- all agog of her Gold. I put the ‘G’ in gold in capital because it is the custom to pay that respect to deity, and surely they worship this God.” The Humboldt left Panama on 21 May and took 46 days to reach Acapulco where supplies were taken on board as all on board were nearly famished. Cooking was done in a communal fifty-gallon pot with one meal served per day, coffee served in the morning, and tea at night. Bedding was where one could find a place to lie down. The ship arrived in San Francisco on 31 August, one month after the arrival of the Ewing. As Bartlett had taken the ship to Tomales Bay to discourage crew desertions, it was not until
6 September that the Ewing returned to San Francisco and McArthur was installed as captain although Bartlett remained attached to the ship.

Gold fever infected the naval crew of the Ewing as it lay in San Francisco Bay. Five sailors, while taking Passed Midshipman William Gibson ashore in a small boat, attacked him, threw him overboard, and escaped with the boat (Figure 3). They were caught by Lieutenant McArthur and brought back for court martial. They were all found guilty of mutiny and desertion while two were also found guilty of attempted murder. All were sentenced to death by hanging from the yardarms of naval vessels in the harbour but the sentences of three were commuted to “one hundred lashes on the bare back, serve out the remainder of their term of enlistment without pay, and with a ball and chain on the leg, in solitary confinement, or at hard labor, or alternately both....” Of the two hung, John Black was executed on the Ewing. In spite of his crimes, he met his death bravely as related by McArthur: “He met his doom very composedly, took leave of all his messmates, and turning around shook hands with all the officers and begged to be forgiven. He walked to the platform with a firm and steady step and at the appointed signal was launched into eternity. May God in his mercy never again place me in such a trying situation.”

Some work was accomplished with a survey of Mare Island Straits in San Francisco Bay, but the Ewing was shorthanded. Thus, in early December McArthur sailed for Hawaii in order to recruit additional crew and “to run away from the incessant rains which are said to prevail with winter.”

He returned to San Francisco and sailed on 3 April for a reconnaissance of the northern coast. McArthur was fairly discouraged by this time and wrote to his father-in-law: “I have made up my mind to be disappointed with regard to the probability of our usefulness on this coast … I feel confident that no work can go on at the present wages of the country as it would require the whole of the Coast Survey appropriation to keep a party together….” However, like most ships, once the Ewing sailed, all the gloom and doom evaporated. On 13 April 1850, McArthur wrote from Trinidad Bay, “I may safely say that the only happy days I have spent in the country have been spent since we started. I am at last at work and most usefully employed in making a reconnaissance of the Coast as we go up.... We have completed a very correct outline of the coast, its headlands, Bays, Rivers and indentations from San Francisco to this place, as well as carrying our soundings as we go....”

In June, McArthur described the scenery in the vicinity of the Columbia River as “beautiful and some places and some points of view the grandest that the eye ever beheld.” He found time to speculate in real estate as he and two other officers acquired homesteads in the Willamette Valley. He felt that if he could hold it for five years “it would be a fortune.” In late June and early July he inspected the Puget Sound area on the steamer Carolina leaving Bartlett in command of the hydrographic party. He described the waters of the sound as “a strange and peculiar anomaly. The deep blue sea runs up inland passing between straits but half a mile wide with a depth of over a hundred fathoms. Bays, Harbours, Inlets and Roads startle you at every turning forming a perfect labyrinth.” From the south end of Puget Sound, he travelled overland to the Cowlitz River and took a canoe to the mouth of the Columbia. He was gone for over a month on this trip.
By the end of August, the Ewing was back in San Francisco. McArthur experienced remarkable weather, both at the entrance to the Columbia River (Figure 4) and on his trip back down the coast. In his words, “... We have been successful in surveying the mouth of the Columbia River and up the same as far as Astoria.... the dangers of navigation of this truly magnificent river have been vastly exaggerated. We have crossed the bar sometimes as many as ten times a day for weeks together.... On our way from the Columbia River we were successful enough to make a good reconnaissance of the whole coast from Cape Disappointment to this place and the limits of error may be estimated at one mile in longitude and an ½ mile in latitude. This I consider quite a triumph.”

While in San Francisco, McArthur was engaged in preparing for the next reconnaissance which was to extend south to San Diego. On 21 November, he received the welcome news that he was to proceed to the east coast and take command of a steamship for West Coast survey duty. Thus, with the prospect of seeing his wife and family a year earlier than he had anticipated, he booked passage with Washington Bartlett on the steamship Oregon bound for Panama. The Oregon was under the command of his old friend Carlile Patterson who had left Naval service to serve with the Pacific Mail Steamship Company. Patterson had recently served as commanding officer of a Coast Survey vessel that worked in the vicinity of Mobile Bay. Patterson spent the next ten years on the West Coast prior to returning to the Coast Survey at the beginning of the Civil War as hydrographic inspector. He ultimately became its fourth Superintendent. The Oregon departed 1 December; shortly after leaving San Francisco McArthur suffered an acute attack of dysentery. He never recovered and tragically died 23 December as the Oregon was entering the port of Panama.

William Pope McArthur’s greatest work was his reconnaissance of the Pacific coast of the United States. However, his work inspired his descendants to settle in Oregon where they became prominent in politics, newspaper journalism, and the utilities industry, as well as being scholars of Oregon history and geography. If he had lived, it is probable he would have risen to high rank in the Navy as many of his naval colleagues in the Survey rose to the rank of rear admiral or higher in later years. The Coast Survey and its descendant organisations have commemorated his name by naming three ships McArthur and numerous geographic features for either McArthur or his family, most recently McArthur Escarpment and McArthur Canyon, southwest of the Columbia River Entrance in 2005.