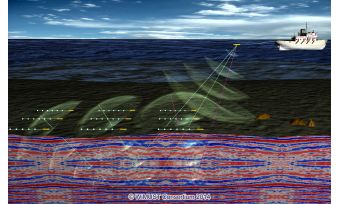 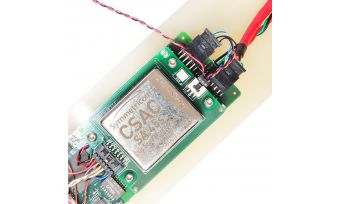 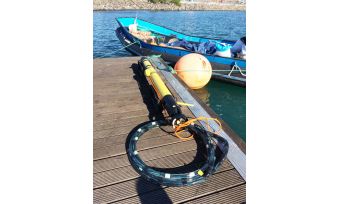 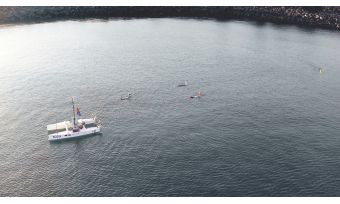 Traditionally, seismic acoustic surveys are performed with a vessel that tows a powerful acoustic source (an airgun array) and one or multiple streamers - an array of hydrophones on a system of long cables. Acoustic waves from the source bounce off the sub-bottom structures and travel back to the sea surface, where the reflections are captured by the hydrophones. Post-processing of the acquired sound propagation data reveals the details about the structures beneath the seafloor.

Objectives of the survey and the subsurface complexity in the target area define the particular configuration of the data-acquisition solution. Developed over the past 50 years, contemporary methods range from 2D surveys with single-vessel narrow-azimuth passes to sophisticated wide-azimuth multi-vessel 3D surveys, and the choice of a particular survey scenario is based on balancing the required image quality with available time and cost resources while minimising risks.

As modern technology allows the capture and processing of bigger and bigger data volumes, a large 3D survey would, for example, involve a specialised vessel that tows up to 10 parallel streamers 4 to12km in length, each containing over 300 receivers paired with accelerometers, depth and other sensors. With 17.6 square kilometres covered by its spread, one such system is, in fact, the largest man-made moving structure on Earth.

Towing such a large object may yield faster production rates, but obviously comes at a cost. Even manoeuvring a big streamer array requires significant space and time - a 10 km streamer might require up to 8 hours to turn.

While being extraordinarily well engineered solutions, the streamers present limitations that need to be overcome in order to further improve seismic acquisition quality and efficiency.

Large streamer spreads are subjected to lateral drift (so-called feathering) that requires efforts to mitigate, and are exposed to significant forces that lead to risky deployment and recovery. Other setbacks include swell and turbulent flow noise that affects seismic data, inflexible source-receiver geometry, inability to operate in obstructed areas, and extensive barnacle fouling in certain areas.

Modern industry tends toward longer streamers, higher streamer counts, tighter streamer spacing. But towing such a large recording system may not be the ultimate solution in terms of the ratio of data quality to cost. Is bigger necessarily better?

The EU-funded WiMUST project aims to fundamentally improve existing methods for geophysical acoustic surveys by ‘cutting the cable’ and decoupling the acoustic source from the system of receivers. The main novelty of the WiMUST system is using marine robots to capture seismic data instead of conventional streamers.

Discarding complex kilometre-scale structures, the 9 project collaborators advance an innovative concept where short streamers of small aperture are towed by autonomous underwater vehicles (AUVs) that work together in a cooperative formation.

The AUVs act as sensing and communication nodes of a reconfigurable mobile acoustic network, and the whole system behaves as a distributed sensor array for recording data, obtained by illuminating the seabed and the sub-bottom with strong acoustic waves from a source(s) installed on-board a support vessel (Figure 1).

The 36-month WiMUST initiative started on 1 February  2015 and brings together a group of research institutions, geophysical surveying companies and SMEs with expertise in autonomous systems, marine robotics, communication, navigation and cooperative control.

The four academic partners are:

The five industrial partners are:

In 2015, the end-user partners laid out the WiMUST groundwork by defining the requirements for the system and a reference scenario to validate its performance - a 3D geotechnical seismic survey. Based on the end-user objectives, the WiMUST consortium established system specifications and outlined the roadmap for further theoretical and experimental studies in distributed sensing, cooperative control, underwater communication and group navigation. The goal is to design and test a system capable of executing a compact geotechnical survey, that could eventually be scaled to performing large 3D kilometre-sized operations.

The AUVs bring the benefits of mobility and allow for the  departure from the traditional geometry of seismic receiving arrays by employing vertical and horizontal configurations. Within the WiMUST framework, the system of receivers is viewed as a distributed sensor array (DSA), free to adopt any geometry. To maximise the information content extracted from the acoustic signals, the WiMUST research efforts in determining the criteria for optimal DSA geometry follow the low field coherence approach, i.e. the sensors for seismic data-acquisition should be placed where the acoustic field is the most diverse.

Research in Cooperative Navigation and Control

Cooperative navigation and control of the AUV team is crucial for WiMUST system performance, as acquisition of seismic data with the distributed sensor array would require each receiver to be correctly placed for the desired source-receiver geometry of the mission.

WiMUST partners work on cooperative navigation and control algorithms that will accurately steer the vehicles so that all the AUVs and the towed streamers avoid collisions and maintain the specific geometry relative to the acoustic source(s). Several algorithms were investigated - the cooperative path following, where a pre-defined path is set for the formation, and the target/trajectory tracking, that imposes ’time and place’ rules - a timing law and prescribed waypoints for each vehicle to follow. A hybrid approach that combines the benefits of the two seems more appropriate for the WiMUST system and is the subject of further investigation (Indivieri et. al, 2016).

Efforts in mission planning for the WiMUST system are focused on an efficient planner that will generate waypoints, based on the required vehicle formation for optimal sensor array geometry, and ensure collision-free AUV streamer motions. The paths generated by the planner will be used by the navigation system to guide the vehicles along the mission phases.

Research for the Communication System

Communication architecture of WiMUST must ensure that positions of each AUV in the formation are known with centimetre-scale accuracy, and that the internal clocks of the vehicles are precisely synchronised. This is crucial to ensure that the acquired seismic data is assigned temporal and spatial tags that are consistent across the formation, as well as to derive relative positions of the vehicles for navigation and control.

The AUVs are equipped with EvoLogics underwater acoustic modems, capable of measuring distances with high accuracy even when operating in dynamic, reverberant underwater acoustic channels thanks to the adaptive spread-spectrum technology. To accurately synchronise the nodes of the distributed underwater acoustic network, the team implemented a novel integration of a chip-scale atomic clock into the modems - so the internal clocks of the sensor network nodes are synchronised with GPS on the surface pre-mission (the so-called disciplining procedure), and maintain the desired high precision when submerged (Figure 2).

Project partners used IST’s MEDUSA AUVs, Folaga AUVs from Graal Tech and Geo Marine streamers. A catamaran from IST served as a support vessel for AUV tracking. Key challenges of the trials were to validate the atomic clock disciplining to ensure synchronised AUV timekeeping, perform synchronous clock, one-way-travel-time positioning of the vehicles, as well as testing algorithms for cooperative behaviour of the AUV swarm (Figure 3 and 4).

The trial objectives were achieved, and WiMUST partners are planning the next round of field experiments for July 2017 to experimentally verify further advances. The next step would be performing a small-scale seismic survey using a sparker acoustic source, and comparing the results with pre-existing surveys of the area (Figure 5).

A robotic receiving antenna that changes its geometry is a step away from the classical ship-towed streamer solution and holds a lot of potential for significant improvement of ocean surveying.

Compared to streamer-towing, a robotic swarm system would greatly simplify marine operations from deployment to recovery - cutting the cables between the ship and seismic receivers would cut both time and cost of a survey operation. Such systems could be deployed from vessels of opportunity and work safely and efficiently in congested areas.

Using AUVs would significantly reduce risks that skyrocket project costs: where a towed system is often a survey’s single point of failure, the failure of one AUV would not compromise operation of the swarm. This is important, as whilst the geophysical survey is a fraction of a large construction project’s budget, survey delays can cause tremendous penalties incurred due to standby rates of construction equipment chartered in advance.

Offering an advantage in data quality, distributed receivers of acoustic signals could be excited from different angles, which would improve the seabed and sub-bottom resolution as well as maximise the extracted information content.

Optimising the shape of the robotic receiver formation to the specifics of a particular survey scenario is a big leap for the seismic surveying technology, and design and implementation of such systems is a challenging task that calls for significant research and experimental efforts. Forthcoming research aims to reinforce the advantages perceived today. The WiMUST project’s goal is to pave the wave for further advances and achieve results that could be scaled to 3D survey missions for exploration and development of large target dimensions.

The work of the WiMUST project collaborators received funding from the European Union’s Horizon 2020 research and innovation programme under grant agreement No. 645141.

Special thanks are due to Giovanni Indiveri (ISME), Jonathan Grimsdale (CGG), Henrique Duarte (GeoSurveys) and Luís Sebastião (IST) for their kind assistance.