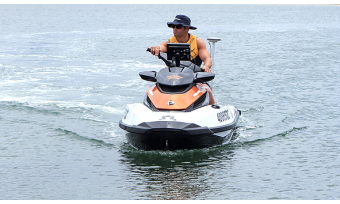 On 29 November 2005, the United Nations designated 21 June as World Hydrography Day. This year, World Hydrography Day also marked the 96th anniversary of the establishment of the International Hydrographic Organization (IHO). Hydrography has long been essential in the exploration and development of the South-West (SW) Pacific region. Apart from using the stars for navigation, the early spread of people through the SW Pacific has also been dependent upon hydrography. Knowledge was passed down to those behind the early explorers either by word of mouth or through the use of nautical charts and other hydrographic knowledge. While the film ‘Moana’ may just be an animated movie to some, it also depicted the use of some hydrographic information to navigate. Explorers such as Cook, Flinders, Janszoon, La Perouse and even the first Australians were both navigators and hydrographers at the same time, opening up new worlds and opportunities.

Hydrography is the charting of the Oceans and Seas and navigable waterways of the planet. The IHO has stated: "It remains a fact that the depth of barely 10% of the world’s oceans and about 50% of the world’s coastal waters has been measured directly. The depth of the remainder is either estimated from such things as satellite-based gravity measurements or no depth is available at all. The result is that there are higher resolution maps of the Moon, Mars, and Venus than for most of the world’s maritime areas. Survey coverage is particularly poor in the Caribbean, Indian and Pacific Oceans and the Polar regions, but all areas of the world are affected to some extent, including the waters of many developed coastal States."

Contrary to popular belief, and despite it being the largest country in the SW Pacific region, there are still parts of the Australian coast that have not been completely charted today.

A product of Hydrography is nautical charts. This allows nation states to trade by providing routes for safe shipping. With our near neighbours in the PNG and the South West Pacific, safe passage allows their economies to benefit from tourism, fishing, exporting of their goods and commodities and import their daily needs. Further, Hydrography allows for the planning for the effects of climate change.

The science of Hydrography is used for exploration and oil & gas infrastructure, including drilling platforms and pipelines. It is used to lay subsea cables (power and telecommunications) between countries and continents. It is used in developing renewable energy sources. (Wind, wave and tide.)

There are changes coming within the profession, the use of satellite derived bathymetry, autonomous vehicles (surface and subsea) and crowd sourced bathymetry, and outsourcing of Hydrography from the public sector to the private sector.

As island nations, Australia and its neighbours in the SW Pacific region depends on Hydrography for the safe and productive export of resources and for the import of many of its needs. As such, the work of hydrographers is significant and important to the development of the region's economies, the support of safety of navigation, the protection of the marine environment, coastal zone management, marine spatial data infrastructures, defence and security, resource exploration, and all other components of the blue economy - whether from the public or the private sector.